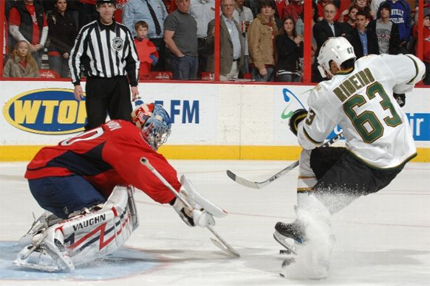 The big news coming out of last night was not that the Washington Capitals lost 4-3 to the Dallas Stars. The 13-game winning streak was awesome while it lasted, but these things happen.

No, the take away from the game is that goalie Semyon Varlamov officially stepped out of the running to be the team’s starting goalie come playoff time.

He might not have made an official statement, but none was needed. His play of late speaks volumes.

Well, in a six-minute span, Varlamov and the Capitals allowed three goals and eventually fell to Dallas in a game they absolutely had no business losing. What’s worse is that, for the third-straight game, Varlamov gave up multiple “softies.”

So basically, here’s what you saw last night:

On one side of the rink, you’ve got Stars goalie Marty Turco, who was magnificent while stopping 49 of the 52 shots he faced. Seriously, we cannot overstate just how much Turco enabled Dallas to steal a win last night. Without his stellar play, the Stars lose in a blowout.

And then there’s Varlamov letting yet another puck dribble through the five hole for a backbreaking goal. In his last three outings, Varlamov has allowed 13 goals while posting a 4.24 goals against average and a .843 save percentage. That’s not cutting it.

We’re back to many of the problem areas that popped up last year in the playoffs against Pittsburgh. One soft goal gets past him, racks his confidence and suddenly Varlamov is giving up goals in bunches.

If you’re an opposing player the scouting report has to be if you score once, just start throwing junk on net because you’re going to beat Varlamov for one or two more goals before he regains his composure.

At this point, we should probably point out that Caps goalie Jose Theodore has gone 12-0-2 in his last 14 games while posting a 2.38 goals against average and a .929 save percentage. In his last two games, Theodore has stopped 53 of 54 shots. Simply put, he’s everything that Varlamov is not.

Much like Turco last night, Theodore was the deciding factor over the weekend in a 2-0 win over the New York Rangers. Not only is he playing some of the best hockey of his D.C. tenure, but he’s outshining the youngsters – Varlamov and Michal Neuvirth – who were supposed to be a lock to supplant him this year.

Theodore is a free agent after this season. He’s a veteran goaltender who is mature enough to shake off a weak goal against and immediately put it past him. He’s always been a streaky goalie prone to up-and-down play, but when he’s on his game, Theodore is tough to beat.

In the last two months, Theodore has clearly established himself as the number-one goalie. And honestly, the Caps should strongly consider sending Varlamov down to Hershey for a few games to get his head back on straight.

With 16 games left to play, the Capitals need to be preparing for the postseason. Boudreau and friends need to take a good, hard look at the players available and decide who they will count on in their quest for the franchise’s first Stanley Cup.

You’re seeing a guy like rookie defenseman John Carlson seize the opportunity he’s been given, and therefore the 20-year-old is enjoying playing time while more established players ride the bench. But it works the other way too.

If a guy like Varlamov or Brendan Morrison finds himself in an extended slump, the organization has the depth to sit him down and turn to someone else. Everyone has an off-night, but if it turns into a pattern, there are plenty of other options available.

Varlamov is still a quality goalie and we still have every reason to envision a day in which he is without question the number-one guy here in Washington. But right now, he’s lost his mojo. His confidence is so low that if he gives up one goal his head starts swimming and it’s only a matter of time before he’s fishing another puck out of the back of the net.

He’s no longer letting the game come to him. He’s forcing things. He’s over-thinking everything. Varlamov just needs some time away from the spotlight to pull it all back together.

Everyone knows the one area that can derail this talented Capitals squad come playoff time is shoddy goaltending. As surprising as it might be to hear, considering how folks thought the situation would play out this season, Theodore is head and shoulders above anyone else in the rotation.

The time is now to put Theodore in net and cross your fingers that he can ride this hot streak a while longer. Call up Neuvirth and let him be the primary backup. Varlamov will bounce back from this. The Caps just aren’t in a position right now to wait for him.

(* – in case you couldn’t tell, this number is completely made up.)