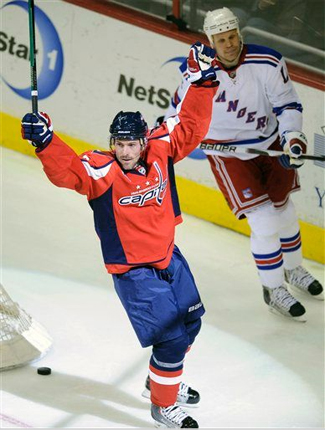 When Washington Capitals general manager George McPhee made four trades in the final hours before the National Hockey League’s trade deadline last week, his intention was to acquire veteran, blue-collar players who could enhance the lineup without subtracting from what was already in place.

The Capitals weren’t perfect, but they did have the NHL’s best record. So these subtle moves were intended to add depth for a run at the franchise’s first Stanley Cup.

In his first game in Washington, gritty forward Scott Walker paid instant dividends – scoring two goals to lead the Caps to a 5-4 victory over the Tampa Bay Lightning. All this from a guy who was acquired for a seventh-round pick. Clearly McPhee is a genius.

The question then became – what do the new guys do for an encore? And the answer, as evident Saturday night, was more of the same.

This time it was center Eric Belanger who got the hometown crowd out of their seats, scoring the game-clinching goal in a 2-0 shutout over the New York Rangers. How many times can we say it? Every time this team makes a move, they seemingly come out on top. If you’re a fellow general manager and you see an incoming phone call from McPhee, you’ve got to think twice before you answer the call, right?

We caught up with Belanger this weekend to get his thoughts on moving from the Minnesota Wild, who are currently 13th in the Western Conference to the Capitals, who boast the league’s best record. You might not believe this, but he’s pretty excited to be here.

First of all, let us take a moment to officially welcome you to town. How much is your head swimming these days?

“It’s been crazy,” he said. “My first game in 20 days and it’s for a new team, a new system and a new city. There was a lot to digest, but it’s just going to get better from now on. I feel like each day the pressure goes down a little bit. I was talking with Scott [Walker] and we’re both a little tired. But we’re going to get some rest and be ready to go.”

On a personal level that’s got to be pretty jarring. You go home to enjoy some time off with your family and then, right before you get back to work, you’re informed that you’ve been traded. What was that like?

“Yeah, that was the tough part,” Belanger said. “I was in Calgary, getting ready to play a game that night and then I’ve got to get on a plane and your life changes. You know, I have two young children at home and they don’t really know what’s going on. They’re asking questions. As a human being, you’re trying to reassure them. But part of the game is being mentally prepared. You’ve got to get ready to win some games.”

You’re coming into this new situation with an outsider’s perspective. What were your thoughts on the Capitals prior to this week?

“We only saw these guys once this year, but this is a team that has a lot of power up front,” he said. “They can score a lot of goals and they’re a really good team all the way around. I think if this team plays good defensively, they can be dangerous in the playoffs.”

For those in town who may not know much about you, tell us a little bit about yourself and your style of play.

“Faceoffs and playing on the penalty kill are two things I take pride in doing,” Belanger said. “My main thing is my speed. As a centerman, I like to carry the puck and make plays. In my first game here I felt like I was a little tentative because I was coming to a new team and you don’t really know what to expect with a new system. You’re not playing as well because you’re thinking more than just reacting. But it’s going to get better and I was just happy to get the first game out of the way and that we got the win.”

Coach Bruce Boudreau runs an offense that’s pretty different from what most new guys are used to. Are you excited to step into your new role on an offense that really gives players more freedom than maybe they’ve been accustomed to in the past?

“Definitely. As a player, you want to be able to have some freedom out there,” he said. “But, on the other hand, you want to make sure you’re responsible defensively. In the East, you see teams rely on offense a little bit more than in the Western Conference. It’s going to be an adjustment, but it’s a fun way to play the game.”

Has Boudreau or anyone else talked to you yet about their expectations moving forward?

“No, but I’ve been around the league for nine years and I’m just going to keep playing my game,” Belanger said. “That’s what got me here and will give me a chance to play in the playoffs and maybe even win the Cup.”

After this season you’re an unrestricted free agent. Obviously you just got here and it’s foolish to rush to any decisions, but is this a place you could see yourself sticking around for a while?

“Yeah, I’m hoping that this is a place that I can put down roots,” he said. “I’m 32 years old and looking for a place to settle down. Hopefully things will work out here.”