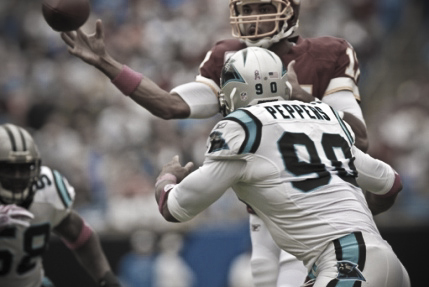 Since the day he took over the Washington Redskins back in 1999 there are two absolute truths that we can say about owner Daniel Snyder.

First, he really wants to win. Like, really, really badly. We don’t think anyone can question that. Simply put, Snyder has never been afraid to outspend the competition in pursuit of this franchise’s fourth Lombardi Trophy.

The other thing we can say about him is that Snyder is absolutely addicted to star appeal. During his decade plus in charge, Snyder has never met a big name he couldn’t envision wearing the burgundy and gold.

We bring this up because Friday is the start of NFL free agency. And this year, like every other year, the biggest names available on the open market will once again be linked to the Redskins.

Free agents looking for a payday love hearing that Snyder’s plane is fueled up and ready to go. Agents dream of receiving a call from Redskins Park at 12:01 a.m. and hearing the following sentence, “Mr. Snyder would like to speak with you about one of your clients.” It’s the worst-kept secret in the NFL today. The Redskins owner has a wad of cash burning a hole in his pocket and, if you play your cards right, he’ll happily make it rain for you.

If you’ve ever been to the Pro Bowl or had a good game against the Redskins (cough*Antwan Randle El*cough) and are no longer wanted by your team, just bat your eyelashes in the general direction of Ashburn, Va., and you could be in line for a minimum deal of five years, $25 million. We would list a dozen or so examples of this, but honestly, we don’t want to crack open the liquor cabinet this early on a Tuesday morning.

So naturally there are reports that the Redskins have their sights set on top free agent prize, defensive end Julius Peppers. It’s no different than a year ago when the big-name player was Albert Haynesworth. If you’re a writer, just put out your Redskins-free agency template and fill in the blanks.

But here’s the thing – it’s not supposed to be this way anymore. The Redskins finally took steps to become a professionally-run organization when they let go of Vinny Cerrato and Jim Zorn in favor of Bruce Allen and Mike Shanahan.

Everyone knows that the Redskins have been nothing more than a fantasy football team for a decade or so. But the Allen-Shanahan combo was supposed to kill that trend. No longer would Redskins fans have to settle for “Offseason championships,” followed by a sub-.500 season.

No, we were led to believe that we were now in good hands with folks who know how to win Super Bowls. Long-term vision was supposed to replace the “we’re just one player away” quick-fix mentality. These aren’t supposed to be men who fall for marquee names looking to cash in on what they’ve done, not what they’ll do next.

We hate to say it, but if there’s any truth to the rumors that the ‘Skins are hoping to land Peppers, then it’s safe to say that nothing has changed at Redskins Park. The names calling the shots might be different, but we’re ultimately in for more of the same once football season rolls around again.

It’s funny, the country, for the moment at least, cares about hockey again. Watching Ryan Miller and the rest of Team USA make their improbable Olympic run temporarily captivated the nation and had casual sports fans tuning in to see just how far those scrappy underdogs could go.

We bring Team USA up for good reason. Take a look at their roster. You won’t see an all-star team. You won’t find a collection of the biggest names. Instead, you’ll find players handpicked to play a very specific role.

They might not sell as many jerseys, but they’re each there for good reason. Each player is a piece to the puzzle. Other teams might have more talent or bigger names, but when everyone on Team USA works together in that specific system (a system, by the way, tailor-made to best utilize those players), they were truly capable of something special.

One other noteworthy aspect about Team USA, when they announced the 24 players they were taking to Vancouver, just five of them were over the age of 30.

Aging veterans like Mike Modano and Chris Chelios, who were once known as elite players, were left off the roster in favor of younger, hungrier players who might not have the name recognition, but were eager to prove they’re worthy of representing their country on the world’s biggest stage.

Now, let’s take that information and apply it to the Redskins. The coaching staff was willing to put any egos aside and put together a scheme that best utilized their players. Hmmm. Jim Zorn, Greg Blache, you hear that? We bet you two didn’t even know that was an option, did you?

Team USA’s general manager Brian Burke refused to play the name game, and instead targeted each player to fill a specific need. The Team USA gameplan also revolved around a youth movement, rather than building with players past their prime. You taking notes Bruce Allen?

There’s that old saying, “You only get one chance to make a first impression.” Well, for better or worse, the book has been written on Daniel Snyder. He’s labeled as a hands-on owner who can’t help but meddle and overspend.

This weekend will give us our first chance to determine what to expect during the Shanahan-Allen era.

They can run off and court headliners like Julius Peppers in an effort to sell more jerseys or they can focus on the five other areas on the roster that are actually in need of attention. They can play another round of fantasy football or they can consider things like team chemistry.

They can continue to rebuild a struggling franchise from the ground up in hopes of returning the Redskins to relevance or they can fall victim to the same traps that have sabotaged any hopes of respectability since 1999.

Which path will they chose? No one knows for sure. That being said, we’ll learn a lot about the new regime this weekend.