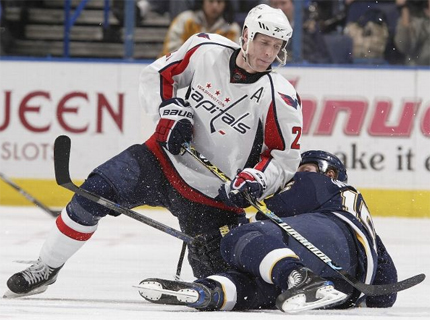 It seems like only yesterday the National Hockey League was on hiatus while the Olympics were in full swing. Well, technically, it was yesterday, so nevermind.

At any rate, action resumes this week for the Washington Capitals, who have their sights set on making some more franchise history.

At 41-13-8, the Caps have the league’s top record and have a chance to earn the franchise’s first President’s Trophy. The Capitals might have faltered – dropping three straight heading into the Olympic break – but the team is now rested and ready to go.

With that in mind, we present to you five subplots worth watching between now and the end of the regular season.

1. The trade deadline. General manager George McPhee needs to take a cold, hard look at this roster and determine if he’s got what it takes to bring home the Stanley Cup. We know that the team’s mindset is to avoid trading away young assets for veteran rentals, which we fully support. No sense in gutting your franchise’s depth if you can help it. But at the same time, McPhee will definitely be busy between now and 3 p.m. Wednesday afternoon making calls and fielding offers.

Do the Capitals need another established defensive-minded blueliner? Should they bring in another center? Would a strong veteran presence – regardless of position – help guide this young team in the right direction come playoff time? These are just a few of the questions the team’s front office has to ask.

If we had to guess, we’d say the team makes a move, but nothing drastic. Think along the lines of the Chris Clark/Milan Jurcina for Jason Chimera deal earlier this season. There might be a big name or two that gets moved prior to the trade deadline, but chances are it won’t involve the Capitals unless it’s a deal simply too good to pass up.

2. Get defensive. Everyone who follows hockey knows the Caps can score. Coach Bruce Boudreau has no problems giving his players the green light to take chances when they see fit and that’s why his team has 43 more goals than anyone else.

But sometimes his players are a little too eager to push the puck up ice and not quite as motivated to back check and take care of business in their own end. In their last four games before the break, the Capitals gave up 20 goals. In related news, Washington dropped three out of those four games (and needed overtime to rally back to beat Pittsburgh).

Simply put – this team won’t win anything if they don’t play better in their own end. Let’s say, for argument’s sake, that McPhee fails to acquire a rugged, stay-at-home defenseman. Should the Caps pack it up and call it a day? Not at all.

Here’s one thing that should be done regardless of any possible trades – give yourself the best chance possible to win.

That means less of John Erskine and Tyler Sloan and more of John Carlson and Karl Alzner. We fully understand that the contracts of the dynamic duo of Carlson and Alzner makes it easier to shuttle them between here and the Hershey Bears, but these two are clearly better than the Erskine-Sloan combo.

Even if you keep Sloan in the minors (he was assigned to the Bears over the weekend), make Erskine a healthy scratch and only promote one of your top two prospects, you’re in better shape than you were before.

3. Choose wisely. Caps goalie Jose Theodore has played in 35 games this season. Youngsters Michal Neuvirth and Semyon Varlamov have been in net for 17 games each. It’s unrealistic to think that the Capitals can ride into the postseason with some sort of goalie rotation. That’s not how the playoffs work.

If you think Theodore has what it takes to backstop a run for the Stanley Cup, then stick with him and utilize the other two goaltenders when he needs a break. That being said, we wouldn’t blame the team if they had concerns with Theo.

Neuvirth has a solid postseason resume (16-6 with a 1.92 goals against average and a .932 save percentage), but that’s in the AHL. Taking nothing away from Hershey, the minors are a far cry from the Stanley Cup playoffs. And while Varlamov is probably the fan favorite of the three netminders, he’s also the guy who utterly collapsed in Game 7 against the Penguins last season.

A case for each of the three goalies can be made. It remains to be seen which direction the Caps ultimately go in, but rest assured, no decision will be more vital to the team’s postseason success (or lack thereof).

4. The secondary market. We already mentioned that the Capitals score goals far more frequently than anyone else in the NHL. And of course, the offense is centered around the “Young Guns” – Alex Ovechkin, Nicklas Backstrom, Alexander Semin and Mike Green.

They also have Mike Knuble, who is a coach’s dream in the postseason. He’ll camp out on the doorstep and happily stuff home any rebounds that a goalie fails to reign in.

But down the stretch and especially once the postseason starts, the Caps are going to need more than just those guys to step up. Last year in the playoffs it was David Steckel who found the scoring touch. This year it could be Steckel again. Or maybe Eric Fehr. Or Tomas Fleischmann. Or Brooks Laich. Whoever it may be, they’re going to need guys who aren’t on the top line to contribute if they plan on keeping opponents honest.

5. Hunt for hardware. The Capitals have a chance to earn their first President’s Trophy. Ovechkin is looking to defend the Lester B. Pearson (most outstanding player), Rocket Richard (goal scoring) and Hart Memorial Trophies (most valuable player) for a third-consecutive season. Boudreau wouldn’t mind winning his second Jack Adams Award, as coach of the year. And of course, there’s the Stanley Cup.

Ovechkin, Boudreau and the rest of the organization would happily forgo any personal accolades for a chance to take home the Cup. A franchise-record 14-game winning streak earlier this season showed just how much this team is capable of. But having the potential to accomplish something and actually making it happen are two totally different conversations.

Year 1 the Capitals were just happy to make the playoffs. Last season, the Caps advanced to the second round before falling to the eventual champions in seven games. This year, this team has built unreasonably high expectations. Fair or not, nothing short of a trip to the Stanley Cup finals will be considered a success.

Whether or not this team has what it takes to make that a reality remains to be seen.