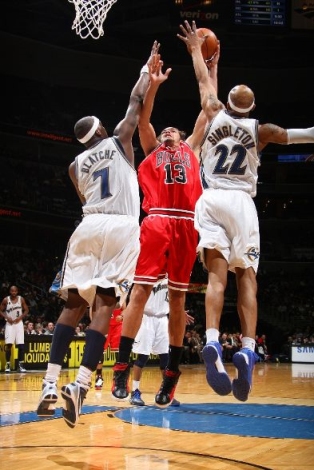 It’s so simple it really shouldn’t even have to be said – the point of sports is to win.

Forget about overbearing parents who don’t keep score and want every kid to get a gold star. Those people suck at life. The reason people play sports is to win.

If we’re talking about team sports, then the goal is to win championships. And one thing we can all agree on is that the Washington Wizards – especially since they changed their name in the mid-90’s – have never been equipped to actually compete for an NBA title.

The Wizards – with a nucleus of Gilbert Arenas, Antawn Jamison and Caron Butler – were typically good enough to qualify for the playoffs in the Eastern Conference, but were never really a threat once they got there. That’s what happens when you build a team full of jump shooters who can’t/won’t play defense.

But the bar was set so low after decades of mediocrity that D.C. sports fans were willing to live with this incarnation of Washington basketball because, if nothing else, they were entertaining.

Even without the locker room distractions provided by Arenas and Javaris Crittenton, the Wizards had a difficult time putting it together on a nightly basis. Some individual players were having a solid season (Haywood specifically comes to mind), but the losses continued to pile up which is simply unacceptable for a team with a bloated payroll like the Wiz. And the breaking point was that this team was no longer fun to watch. People stopped coming to games and a general sense of apathy hovered over the Wizards.

So Butler and Haywood were shipped to Dallas. Jamison was granted parole in Cleveland. And we were left with a bunch of unproven and underachieving nobodies. But here’s the funny thing – the spare parts left over here in Washington have provided unexpected results.

Forget that the Wizards are now 3-1 since the all-star break. More than likely, that won’t last. But what folks should notice is that this team is suddenly watchable again. A perennial knucklehead like Andray Blatche stepped into Jamison’s role and has instantly flourished, as evident by his 25 points per game average over the last four games.

Josh Howard, before he went down with a knee injury in the first quarter of last night’s 101-96 victory over the Chicago Bulls, looked like a man highly motivated to prove his doubters wrong. Every time Mark Cuban or anyone else in Dallas raises questions about his work ethic or night life, the chip on Howard’s shoulder grows.

Newly-acquired forward Al Thornton has instantly provided a spark off the bench – looking downright at home playing under coach Flip Saunders. Thornton averaged just 11 points per game this season for the Los Angeles Clippers, but has scored 16 a game for Washington since his arrival.

Point guard Randy Foye finished with 16 points, nine assists and just one turnover against the Bulls as the Wizards finished their fourth-straight game with 100 points and 20 assists.

Even a nobody like James Singleton, who was literally a throw in from Dallas in the Butler trade, has made the most of his time on the court. Singleton flirted with his first double-double of the season against Chicago, finishing the game with nine points and 12 rebounds in 28 minutes of action.

Like we said earlier, the wins might not keep coming – especially once opposing teams get a chance to break down film of the current cast of characters – but at least the Wiz are giving folks a reason to watch once again.

Moving forward, there are plenty of intriguing subplots.

Can Blatche continue to grow now that the spotlight is on him or is it only a matter of time before he does something else to sabotage his progress? Can Howard return to his all-star form or is he destined to be known more for his off-court antics than for his in-game production? Where is the ceiling for a guy like Thornton?

This group might not inspire fans to rush out and buy season tickets, but they’re at least worthy of watching from the comfort of your living room. Many of these players might not be long-term solutions to turning the Wizards into a respectable franchise, but in the interim, they’re fascinating enough to keep track of and easy to root for.