dark days ahead for wizards 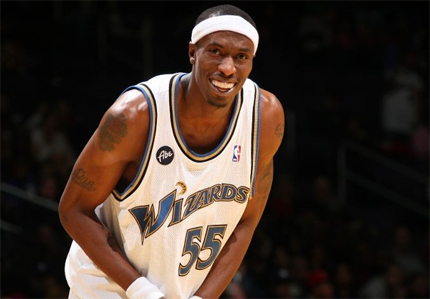 “We weren’t winning as many games as we wanted to win, and I thought it was time to go in a different direction.” – Washington Wizards general manager Ernie Grunfeld.

The trade deadline has come and gone and the Wizards team we are now left with is radically different from the team we’ve gotten used to over the last couple years.

If Gilbert Arenas somehow manages to ever play another game in D.C., he’ll no doubt have to adjust to a locker room that looks nothing like the “Big Three” lineup he relished being a part of.

Antawn Jamison? Gone. Same goes for Caron Butler, Brendan Haywood and DeShawn Stevenson. Jamison now resides in Cleveland and the other three now call Dallas home. So what does that leave the Wizards with?

There’s forward Josh Howard, a former all-star who seems far removed from his glory days. Injuries and poor-decision making off the court seem to have derailed Howard. There’s Al Thornton, a second-year player who has potential, but we have to point out that potential is just another way of saying “ain’t done shit yet.”

Forward/center Drew Gooden was here for a cup of coffee, but made it clear he had no intention of actually sticking around for what appears to be a lengthy rebuilding process. You know it’s bad when a guy is happy to be traded to the Los Angeles Clippers rather than remaining a part of your franchise.

The Clippers are one of the most inept teams in professional sports and have been so for as long as anyone can remember, but Gooden – like most sane basketball players – would rather cash in there than be subjected to “The Curse of Les Boulez.”

Center Zydrunas Ilguaskas was part of the package the Cavaliers sent for Jamison, but he too, will never suit up for the Wizards. Any day now, we’ll hear that the Wizards have bought him out and he’ll end up back in Cleveland.

The Wiz did manage to acquire Cleveland’s 2010 first-round pick and a protected second-round pick from Sacramento during their firesale, but that’s it. Basically they have a handful of expiring contracts and the equivalent of two extra second round picks in exchange for any semblance of respectability.

Maybe we’d feel a little optimistic about the future if we had any faith in Grunfeld to turn this ship around. But what exactly has he done to earn our trust? Other than fleecing the Lakers into taking Kwame Brown for Butler, there’s not much in the way of positives for Grunfeld in D.C.

He’s the one who built the team around Arenas, Butler and Jamison, which meant that Wizards fans were forced to embrace a team full of jump shooters who didn’t play defense. You don’t need extensive knowledge about the history of the NBA to know a fatally flawed team like that isn’t going to win anything.

He’s the one who chose to reward Arenas with a max contract, even though Gilbert had basically been a nonfactor the previous two seasons due to injuries. Even before Arenas brought hand guns to work and earned himself a lengthy time out this was an awful decision.

Grunfeld knew his team would never win a championship, despite anything you might read elsewhere, but went with these guys because they were entertaining. They weren’t going to beat a legitimate contender like the Cavaliers or Lakers, but dammit, they were interesting. They made professional basketball in this town relevant and that was good enough for Ernie.

If it seems we’re being overly harsh on Grunfeld, let us show you why.

Please turn your attention to the Houston Rockets, another team that was active at the trade deadline. The Rockets went into this week knowing that Tracy McGrady was going to be moved.

In the NBA’s world of guaranteed deals, McGrady’s $23-million expiring contract is the equivalent of winning the lottery. Acquiring T-Mac ensures one lucky team would have the financial freedom under the salary cap next season to chase after LeBron James, Dwyane Wade, Chris Bosh and/or others.

Houston knew McGrady was gone and so did the rest of the NBA. There were even rumors floated around yesterday about McGrady’s agent making life difficult for the Rockets if Tracy wasn’t traded – specifically to the New York Knicks. When that happens, the team looking to make a deal typically loses leverage. Not Houston.

To recap: he traded Landry and two spare parts for multiple first rounders and two young, promising players. And all he had to do was take on Jeffries’ bad contract in return.

This, my friends, is how it’s done. If Grunfeld was able to pull off half of this, we’d be more inclined to give the guy a break. But the truth is everyone knew he needed to clean house and they held him over the proverbial barrel. No one offered anything worth a damn, but Grunfeld had little choice but to take it anyway.

The Wizards can now team Thornton with fellow youngsters such as Andray Blache, Nick Young and (assuming he ever sees the court) JaVale McGee while the losses pile up. If Howard does enough to stick around, then great. If not, you have even more cap space. Not that anyone would want to come here for anything more than a pay day.

Folks keep saying how Arenas has played his last game for Washington, but we’re too pessimistic to believe that. Even if the team tries to void his contract, it’s not like that’s a road NBA teams have successfully traveled. They can try, but the player’s union will likely win any attempt to kill Gilbert’s bloated contract.

Grunfeld can then try to buy out Arenas, but it’ll be another repeat of this week. Someone else will be in the position of power and Ernie will be stuck taking whatever he can. Arenas wants a divorce as much as the team does, but it’s not as if he’s going to pull a LaVar Arrington and walk away from money to do so.

So basically what we’re saying is that this team stinks and will continue to do so for the foreseeable future. The team might have cap room, but players don’t want to come here. They’d rather be a Clipper than play for the Wiz.

The Wizards have draft picks, but it’s not like they do anything noteworthy with those. They blew up the nucleus of the current team and now we’re left with an injury-prone Mike Miller and a bunch of nobodies. Same story, just different names involved with the losing.

The bottom line is the Redskins, even as flawed as they are, are closer to respectability than the Wizards. They have a proven coach, a front office that (for the first time in recent history) actually knows what the hell they’re doing and most importantly, fans have hope once again. Now compare that to the Wizards. The only hope we have for them is that the Pollin family gets it together and sells the team to Ted Leonsis and he’s able to once again salvage a local sports franchise.

Otherwise, it’s going to be a rough ride.