from capital hill with eric fehr 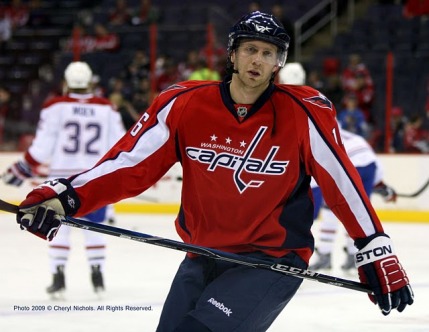 Most hockey players go out of their way to be vanilla. Their quotes come straight from the big book of sports clichés and you rarely hear about their life away from the ice as they typically aim to keep a low public profile.

And then there’s Eric Fehr.

The Washington Capitals forward is enjoying a breakout year. With 14 goals, 14 assists and 28 points, he’s already surpassed his career highs in each category with half a season left to play.

As he’s become more comfortable on the ice, he’s also started to show glimpses of his personality away from the game.

As first reported by our buddy Dan Steinberg, the 24-year-old does a weekly radio show called “From Capital Hill With Eric Fehr” for the folks back home in Winkler, Manitoba.

Because hockey players in general are so content to keep their personal life private, we were curious to hear his teammates’ thoughts on Fehr’s radio endeavors.

An informal poll of the Caps’ locker room showed that none of the seven guys we talked to had actually heard Fehr’s radio show and a few didn’t even know it existed.

“I’m surprised that they even have radios back in Manitoba,” said Capitals forward Matt Bradley. “They’re usually pretty far behind the times, you know.”

We weren’t off to a good start.

“I think he’d do okay,” Bradley said of Fehr’s on-air potential. “He’s not the brightest guy, but I think he can probably muscle his way through it.”

When informed that the show is just Fehr, with no co-host, Bradley began to have doubts.

“There might be a lot of dead air,” he said. “Hopefully he plays some music or something to get through it.”

Upon hearing Bradley’s suggestion that Fehr should consider playing music to have enough content to fill a show, defenseman Mike Green felt obligated to speak up.

“I wouldn’t play any of his playlists,” he said. “He’s straight country, like old school country. I mean they might like it out there, but not here.”

With that out of the way, Green did think Fehr was the best Capitals candidate for the job.

“Out of everyone in the locker room, he’s probably the guy who could do it,” Green said. “He’s got some character and is more ‘out there’ than some of the other guys. But I think that’s good. It’s good for his city back home and it’s good for fans who want to follow Eric.”

Others agreed that Fehr had some of the traits you’d probably want in a hockey player/weekly radio show host.

“I’d definitely be interested to hear him on the radio,” said defenseman Shaone Morrisonn. “He’s pretty outgoing and is always joking around, so he’s got the right personality. It’d be interesting to hear what he’s talking about on there. If it’s good, then it’s good for us. And if it’s bad, we’ll definitely slap a fine on him and figure out his punishment.”

At this point, Fehr strolled into the locker room. We headed over to hear first hand what this show is about and how it came to be.

“It’s something I started working on back in the summer to let all of the people of Winkler know what’s going on in my career,” he said. “They’re always asking my parents and everybody back home, so this just makes it easier for them to ask their questions. We do it every Thursday afternoon and then I try to get it posted as quickly as possible.”

We’ve been informed that the show is just you, without any assistance from a co-host. How difficult is it to do a solo show?

“Well, it’s not an hour or anything,” Fehr said. “It’s just a couple minutes each week. I talk about what’s going on in the dressing room and different stuff like that. I get lots of questions through Twitter or email with younger fans wanting to know about different things going on with our team and stuff like that. I just put a little script together and read it out.”

We’ve talked to a good portion of the locker room and no one has heard your show, which we find rather surprising. How are you managing to keep this from the other guys?

“I’m trying to keep it from the guys because I’m sure they’ll harass me,” Fehr said. [Editor’s note: Oops.]

“I don’t think any of the guys are following me on Twitter, so that’s probably why they don’t know about it,” he said.

You mentioned you’re also on Twitter. Between that and the radio show, you’re really putting more of yourself out there than most hockey players are willing to do.

“Yeah, I’m not really a shy guy,” Fehr said. “When we go to events, I like to mingle with the fans and talk to everybody. It’s just the way I’ve always been. We don’t have a lot of guys on the team doing stuff like Twitter, so I wanted to step up and give the fans a little more insight.”

With you making yourself more available to the public, we’re curious if you’re getting recognized more or if you feel like you’re getting more attention these days?

“I don’t really think I’m getting more attention,” he said. “I have gotten a couple tweets where people say they just saw me somewhere and I’ll look for them. I’ve definitely had that before, but I don’t think it’s changed too much.”

On the ice you’re easily having your best season as a pro. To what do you attribute your success?

“I think I’ve just got more confidence out there now,” Fehr said. “I’m also feeling healthier. I’ve played the last couple seasons with a lot of different injuries and a few different things going on. Now, I’m feeling healthy and feel like I can contribute every day. I feel strong every game and it’s making a big difference.”

This winning streak has shown the rest of the league that you guys aren’t one dimensional. Some nights the stars carry you to victory, but on other nights when the big names are off, the rest of the roster is more than capable of stepping up.

“I think that’s the big difference from last year is that we’ve got guys contributing from all different lines,” he said. “It used to be if you shut down our top line, we’d be in a lot of trouble. But now, we’ve got more guys stepping up and we’re maturing to the point where we don’t have to rely on just one or two guys.”

Okay, well let us ask Eric Fehr the radio host – what does this Capitals team need to do to win it all this season?

That sounded an awful lot like Eric Fehr the hockey player, not the radio show host.

“I think it was a little bit of the radio host answer,” he said with a laugh.

If nothing else comes from this, we hope more fans are able to check out the show and that some of his teammates also experience “From Capital Hill With Eric Fehr” as well. If you get a chance to check it out, please feel free to post your thoughts and comments on the show here. We’re definitely interested to hear what people have to say.