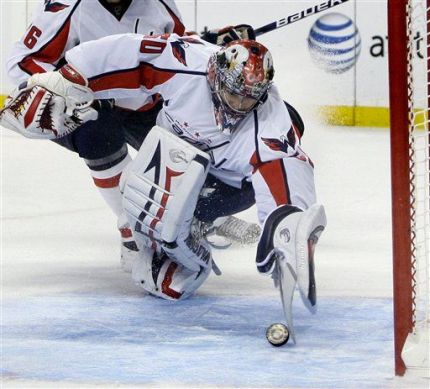 You know, when the Washington Capitals accomplish something for the first time in franchise history, it causes you to re-evaluate things.

More than once this season, we’ve said that our biggest concern with the Caps is that they are supremely talented, but they know it. Most nights, they head into a game knowing they’ve got the more talented lineup and chances are, they’ll come away with the win.

But instead of having a killer’s instinct, this team had the habit of playing to the level of their competition. On nights when the Capitals are playing teams like Pittsburgh, Buffalo or Philadelphia, they typically bring their ‘A game.’ But on nights when they square off against cellar dwellers like Columbus, Toronto or Carolina, they’ve been known to lose in uninspired fashion.

Which brings up to last night’s 4-1 victory over the Boston Bruins. While loaded with talent in their own right, things haven’t been going well for the Bruins of late, as evident by their eight-game losing streak. Thing is, these are some of the most dangerous teams – especially with the Caps having a history of overlooking weaker opponents.

Think of them like the Detroit Lions. With the losses piling up, no one wanted to be the team that finally let them win a game. Of course, the embarrassingly pitiful Washington Redskins earned the distinction this season by letting the Lions snap their 19-game skid, so D.C. sports fans should understand where we’re coming from.

Even as recently as a year ago, the Caps would have come out flat against the Bruins and ended up losing 3-2 in a game that would have had coach Bruce Boudreau steaming as his team took dumb penalties, got too cute with the puck and neglected to get back on defense and therefore leaving their goalie out to dry.

And last night’s game got off to a rough start and definitely would have been an up-hill battle if not for the stellar play of Capitals goalie Jose Theodore. He was definitely on his game early and often, while forward Alexander Semin was busy racking up penalties like he was stock-piling his goods for a blizzard.

For much of the first two periods, Boston was the better team. They were controlling the puck in the offensive zone for long stretches of time. They had several powerplay chances, thanks to Semin. They even had a penalty shot against Theodore. And yet, the score was 1-1 with 20 minutes left in regulation.

Bruins players had to be sitting there wondering the hell had to happen for them to take a lead against the Capitals on a night when they were clearly beatable.

Let us put it to you this way – how demoralizing would it be to you if your team thoroughly outskated and outplayed an opponent for 40 minutes, and yet, you look up at the scoreboard early in the third period and are suddenly down by multiple goals?

You’d be crying for your mommy. And that’s what the Caps are doing to the opposition these days.

In seasons past, this team would mail it in for half the game and then come out flying for an exciting finish – exciting because you legitimately didn’t know if they were going to be able to come back or if they’d dug too deep of a hole.

Well, the Caps have evolved this season. They don’t get rattled when things aren’t going their way early on. They don’t panic when an opponent has them on the ropes. It’s scary to say this, but they now have a veteran mindset of, “We’ve been here before and we know what we have to do to get this game back,” and then they go out in the third period and make it happen.

It’s like when Joe Gibbs was still the master of his domain during his first go-round. He was superb at seeing what the opposition was giving him and making halftime adjustments. This Caps team is able to take a team’s best shot early, not lose their focus and still emerge victorious in impressive fashion.

If the “cutesy” passes aren’t working, Mike Knuble has now showed his teammates that it’s okay to score ugly goals from close range. If one line seems off, Boudreau doesn’t need to shuffle his entire lineup because he’s got faith in the rest of the rotation. If Semin can’t keep himself out of the penalty box, then guys like David Steckel and Boyd Gordon are more than capable of killing off the penalty.

Everyone keeps saying the Capitals need to make a move prior to the trading deadline, and they very well might pull the trigger if general manager George McPhee thinks he can improve his team’s chances for an extended postseason run.

But this team, as presently constructed, is proving they know how to win. Not only that, but they can win ugly. They can win the types of games they let slip away as recently as a season ago. You don’t go 38-12-6 by accident. You don’t outscore your opponents 51-22 on accident. You certainly don’t set a 35-year-old franchise’s record for consecutive wins by sheer luck.

This team is the real deal. Wins like this show that even on nights when everything isn’t going as smoothly as Boudreau might hope, his players have enough experience to pull it together when the game is on the line. There’s no need for pep talks or dramatic speeches. Save those for the movies. These guys just go out in Gilbert Arenas fashion, lay a few weapons in front of you and dare you to pick one.

Ovechkin is off his game? No problem. Semin can’t stay out of the sin bin? No sweat. Theodore is having a slow start? Doesn’t matter.

This isn’t a one-dimensional squad. They don’t care how the victory comes, they just find a way to earn the two points.

Who knows how much longer the winning streak can last or how deep of a playoff run this team has in it, but games like this one suggest you’d be foolish to bet against the Caps.