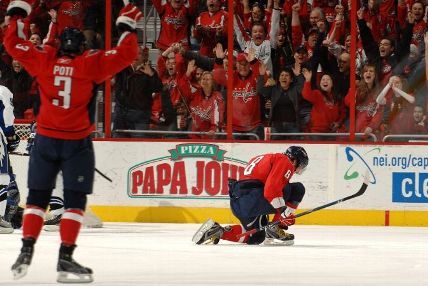 Forget tying a franchise record for consecutive wins or avenging the only loss in the last 13 games. That stuff’s great, but we’re focusing on the bigger picture.

Sunday’s 3-2 win over the Tampa Bay Lightning was one that the Washington Capitals of old would have easily let slip away.

Earlier incarnations of this Caps squad were so reliant on the “Young Guns,” that if Alex Ovechkin, Alexander Semin, Nicklas Backstrom and Mike Green had an off night, the rest of the roster was typically unable to overcome it.

Well, this team is so loaded with talent – most of which is homegrown, we should add – that, thankfully, that’s not the case anymore.

With Green shelved for three games for an errant elbow and the Alex’s looking like their respective alarm clocks didn’t go off until roughly 20 minutes before game time, the Capitals still managed to squeak by a divisional opponent to secure a 10th consecutive victory.

Look, we fully realize how fortunate we are that the best hockey player on the planet laces ‘em up for the home team. And yes, there are many nights when Ovi decides to put the team on his back and almost single-handedly propels the Caps to victory. We’re not taking anything away from the guy.

But it wasn’t halfway through the first period Sunday when we were sending messages to our buddies asking for volunteers for someone to take a trip to the Russia House to politely ask the bartenders to not serve Ovechkin or Semin after midnight on the night before a matinee game. That’s how sluggish the dynamic duo looked for much of the game.

Here’s what stuck out during the early stages of Sunday’s affair:

Normally Ovechkin is the one throwing his body around, but for the first time in a long time he was being “out physicaled” by a motivated Lightning team. Normally when an opponent is foolish enough to take the body on Ovechkin it only fires him up. For whatever reason, that wasn’t the case yesterday.

Even when Tampa Bay wasn’t taking the body, Ovechkin was hitting the ice far more frequently than usual. We’d be hard pressed to remember the last game Ovi was essentially tripping over his own feet with no one else around him.

When he took off a skate and handed it to one of the equipment guys on the bench after a first-period shift, it was almost like he was thinking “It’s got to be my skates. This isn’t like me.”

Quick tangent: His sticks were still snapping at their normal rate, but that’s something we’re accustomed to at this point. We know Ovechkin prefers a lightweight stick with lots of flexibility, but scientists could make millions if they were to develop a stick that accommodates the superstar while not exploding every fourth shot he takes.

(We invented a drinking game a while back that’s fun for all. Every time an Ovechkin stick breaks or defenseman John Erskine loses his stick, you take a drink. Suffice to say, mass quantities are consumed.)

So yeah, he wasn’t flying around with his usual fervor and looked like he was breaking in a new pair of skates for the first time. Oh, and 11 of Ovechkin’s 19 shots were blocked by Lightning defenders. Two shots missed the net completely. All of this sounds like a beer-league hockey player, not Ovechkin the Russian Machine.

And yet, the Capitals won the game. That’s because the rest of the roster is now more than capable of picking up the slack until Ovechkin felt like taking over the game. Once the Lightning tied the game 2-2 early in the third period, Ovi picked up the pace and snuck the eventual game winner past Lightning goalie Mike Smith with 6:26 left in regulation.

After the goal, Ovechkin glided over to the corner and casually bumped into the boards, instead of throwing his body against the glass with his usual reckless abandon.

We’re not hating on the big guy. We fully understand that no one can bring their ‘A game’ for 82 consecutive games – not even a superhuman like Ovechkin. We’re simply illustrating just how off the two-time league MVP was to show that his supporting cast is fully capable of sharing the load these days.

Backstrom and Brooks Laich provided the scoring early on for the Capitals. With Green out of the lineup, guys like Brian Pothier and Tyler Sloan stepped up to provide the necessary support on the blue line. And goalie Jose Theodore played rock solid between the pipes after missing the previous two games due to a lower-body injury.

It wasn’t pretty, but in the end, it doesn’t matter. The Capitals still earned two points for the win and most importantly, they showed they’re more than capable of winning in the rare instances when Ovechkin doesn’t have it.

For that reason alone, this victory might be the most impressive during the winning streak. Everyone knows this team can outscore the Redskins when everything is clicking, but games like this send a message to the rest of the league that the Capitals aren’t one dimensional.

Even if an opponent finds a way to slow down Ovechkin, there’s still more than enough talent in Bruce Boudreau’s lineup to get the job done. That’s great news for Caps fans. Not so much for the opposition.