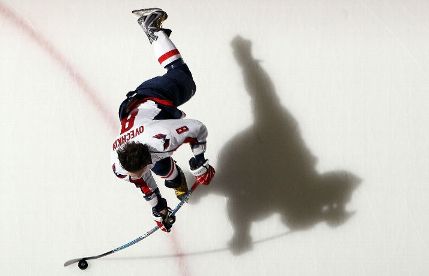 Last night, the Washington Capitals cruised to an impressive 5-1 victory over the Anaheim Ducks for their eighth-consecutive win and improved to 11-1 since Alex Ovechkin was named captain.

This is noteworthy because the last time the Washington Capitals won eight games in a row was way back in March of 1989.

Read that again and think about just how long it’s been. Seriously, a kid born that month can legally drink this year.

During that streak, the Caps feasted on teams such as the Winnipeg Jets, Hartford Whalers and Pittsburgh Penguins – all teams that have since drifted away to obscurity.

Although forwards Mike Ridley and Geoff Courtnall each finished the season with 40 goals, the strength of that Capitals squad was a defensive rotation featuring Rod Langway, Scott Stevens, Kevin Hatcher and Larry Murphy (no relation). You’d be hard pressed to find a better blueline.

Rain Man won the Academy Award for best picture. “Don’t Worry, Be Happy” by Bobby McFerrin earned album of the year at the Grammy Awards. Milli Vanilli had just released “Girl You Know It’s True.” People thought the New Kids On The Block actually had talent.

Seinfeld and the Sega Genesis didn’t exist yet, and Grunge was just taking off. Slap bracelets were still awesome. This was the year that brought The Arsenio Hall Show, Bill and Ted’s Excellent Adventure and Saved by the Bell into our lives.

A gallon of gas was $1.12. A dozen eggs were less than a dollar. A first-class stamp was still only a quarter.

The Capitals still played their home games at the Caps Centre, were in the Patrick Division and the Wales Conference.

Mike Knuble was 16 and learning to drive. Alex Ovechkin was only three and most likely enjoying nap time back in Russia. Braden Holtby wasn’t born for another six months.

Bruce Boudreau, the hockey player, was splitting time in the AHL between the Springfield Indians and Newmarket Saints. George McPhee’s playing days were over and he was working on his next career move. Ted Leonsis didn’t become involved with AOL for another four years.

Like we said at the top, it’s been a long, long time since this team was this good. We’ve included two post-game videos below in which Ovechkin and defenseman Shaone Morrisonn talk about the win over the Ducks. Both are much more qualified than we are to talk about how the game against Anaheim was won.

We just thought a little perspective was in order to show just how well this team is playing and to give people an idea of how far back you have to go to find the last Capitals team that performed at this level. So yeah, enjoy it. Moments like this don’t come around very often.