no ovechkin. no green. no problem. 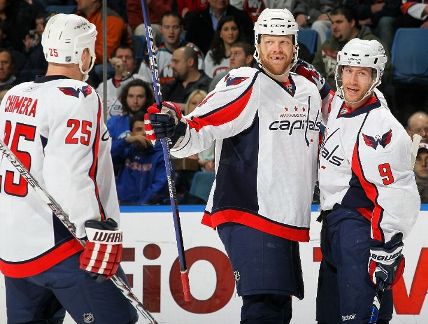 “I think they’re a really good team and they scare me to death.”

Those were the words of Washington Capitals coach Bruce Boudreau heading into last night’s matchup against the New York Islanders.

It made sense at the time because the Islanders always present a challenge to the Capitals, as evident by the fact that seven of the last nine times these two teams have squared off have required overtime.

On top of that, New York has been playing some really solid hockey of late, going 10-4-1 in their last 15 contests. Any reasonable fan would expect that this was going to be a tightly-contested game that would in all likelihood still be undecided at the end of regulation.

And yet, the game was over after the first period. The Caps scored four goals in the opening frame and sent Islanders goalie Dwayne Roloson to an early exit en route to an easy 7-2 victory.

The reason this game stands out is because two of the team’s biggest weapons – Alex Ovechkin and Mike Green – were held pointless. And yet, the team scored seven goals. That’s because nine other Capitals players picked up at least a point against New York.

“It says you’ve got good balance in your team,” Boudreau said of his team’s offensive showing.

Two names that stand out after last night’s performance are John Erskine and Brendan Morrison. Erskine scored his first goal in 109 games and also picked up an assist on Morrison’s goal, which was the first he’s scored in 15 games. Morrison has been in such a slump that the tally was just his second since Dec. 3 and Erskine … well, he never scores.

“I don’t get them too often, so I wasn’t even sure what to do when it went in,” Erskine said.

The Capitals have now won seven-straight games and are playing some of their best hockey we’ve seen from this young, talent-laden squad. Are they unstoppable at this point?

“I wouldn’t say unstoppable, but they’re in a groove,” said Boudreau. “Teams, whether you’re in first place or 30th, at some point in a season things just seem to be working, clicking. Right now, things are clicking for us.”

Boudreau wasn’t kidding. Several Capitals players are enjoying what appears to be a season-long groove.

Hell, even Erskine can be included in the mix. The tough guy had four points in 52 games a year ago and now has five points in 33 games. That constitutes an offensive explosion.

The moral of the story is – the bottom half of the roster is producing at levels reasonable Caps fans couldn’t have expected coming into this season. It’s normal to see guys like Ovechkin, Green, Nicklas Backstrom and Alexander Semin lighting the lamp. It’s what they’ve done since they came to town. But what we’re seeing these days is a much more balanced attack.

When a team shut out elite scorers like Ovechkin and Green, they’re supposed to win the game. Not give up seven goals in a rout. That’s just unfair.

So basically, opposing teams are going into games thinking they have to play mistake-free hockey to have a shot at victory. In a town where the Redskins, Wizards and Nationals take turns holding down last place, it really is a breath of fresh air to have one team worth a damn.

Last night’s win was the 10th time this season the Caps scored at least six goals in a game. The team accomplished that feat just five times last season. The scary part is – four of those high-scoring performances have come in the last nine games.

That leads us to believe that the best still may be yet to come. That’s great news for the Capitals. Not so much for the rest of the league.