the story of jeff schultz 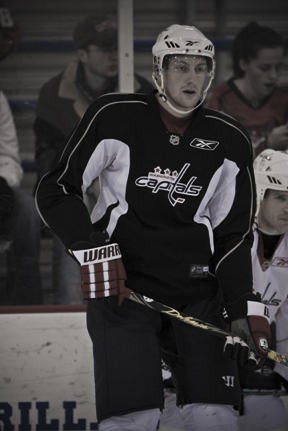 When it’s all said and done, June 26, 2004 may go down as one of the most significant dates in the history of the Washington Capitals.

That’s when the turnaround began as a rebuilding Capitals franchise, armed with three first rounders, headed into one of the deepest NHL drafts in recent history.

Since then, Ovechkin and Green have become two of the league’s best at their respective positions, and just as importantly, they’ve became two of the cornerstones of the franchise, anchoring Bruce Boudreau’s high-octane offense as the Capitals have returned to respectability.

Schultz, on the other hand, has taken a slightly different path. At 6-6 and 224 lbs., he possesses the prototypical NHL defenseman’s body. Many Caps fans took one look at him and envisioned the next Rod Langway or Scott Stevens type of player who would punish any opposing player dumb enough to come near the crease. Truth is, Schultz isn’t that guy and never will be.

Being sandwiched between Ovechkin and Green on draft day and unrealistic expectations from a fanbase spoiled by some of the most dominating defensemen of the modern era has made Schultz the most polarizing player on the Capitals. Some love him. Some love to hate him. But know this – his teammates respect him for what he brings to the table.

“He’s very steady. He’s never out of position or out of a play, and he’s been playing very well for us,” Poti continued. “He’s really been huge for us out there, giving us another defenseman we can count on back there.”

One of the biggest reasons the Capitals can count on Schultz is because his plus/minus rating is so stellar. While fans might expect to see names like Ovechkin, Vancouver’s Henrik Sedin and New Jersey’s Zach Parise among the league leaders, they don’t necessarily expect to see Schultz in the same company. But as of this morning, he’s tied for fifth in the league with a plus 23.

“It’s a meaningful stat to me,” Schultz said. “I’m not going to be out there scoring goals like Ovi, but I take a ton of pride in working hard, being good in our zone and preventing goals. I look at the plus/minus as a big part of my game.”

Your teammates seem to think you’re playing with more confidence this season. What do you attribute that to?

“I think that I’m not worrying about any mistakes I might make out there,” he said. “I’m not trying to do too much. I’m just going out, playing my game and taking it as it comes. I’m just playing hockey the way I know how.”

Are you aware of the love/hate relationship that a fraction of the fanbase has developed towards you?

“Some of the guys were asking if I’d ever read the message boards or anything,” Schultz said. “That’s their opinion. They’re entitled to it. I’m out there trying to do my best and if they don’t like it, that’s fine. People have told me that I’m a guy some of the fans don’t like, but I’m not too worried about that.”

We can’t help but think that some fans took one look at you and rushed to judgment, deciding you were going to be this big, bruising defenseman. Maybe they just needed time to get used to your game and to see what your game is about. What say you?

“I think that’s fair,” he said. “Being a first round pick, like Ovi and Mike, they see all the success they’ve had and maybe they wonder why I haven’t had that success yet. I think the kind of game I play; I’m not a flashy guy like them. I just try to do what I have to do out there.”

How would you describe your game?

“Nothing too flashy,” Schultz said. “I’m just trying to get back to pucks and move them up to the forwards as quickly as possible. I’m trying to make smart decisions with the puck in our zone. Focusing on our zone is a real key to my game and not allowing big plays for opposing teams is important. I’m trying to win all the battles in the corners and in front of the net.”

If that’s how you see yourself, then the two biggest stats for you would be plus/minus and your ice time, right?

Schultz ranks in the top five in the NHL in plus/minus and the top five on the Capitals in ice time, averaging more than 19 minutes a game. If those are the two most important statistics to the 23-year-old, then he’s got to be pleased. One thing is for sure, Boudreau is definitely happy with him.

“Jeff is playing the best he’s played in his career in this stretch,” Boudreau said earlier this month. “His plus minus, sometimes it’s a stat that you can look at and say it’s a real good stat or it doesn’t mean much. But every time you look up, he’s on for two goals for and none against. I think he’s a plus 23 in less than 50 games, which is a real good indicator that when he’s on the ice, something good is going to happen.”

Sure, he’s not Ovechkin or Green. He’s not Langway or Stevens. He’s simply a blue-collar worker who shows up every day and does the little things that often times go unnoticed to the casual fan. He’s fine with it and so are his teammates and coaches. We have a feeling that if he continues his strong play, Caps fans will eventually come around on him too.