caps powerplay too much for pens 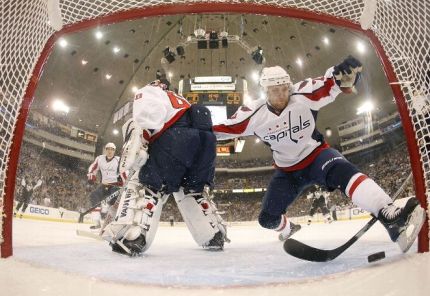 It only took 253 days, but the Washington Capitals finally got their first chance at revenge against the Pittsburgh Penguins, the team who ended their Stanley Cup run one season ago.

While it’s safe to say that no regular season contest can make up for a Game 7 playoff loss, this was definitely a rivalry matchup that neither team wanted to be on the losing end of.

The Capitals came out flying, which was a welcomed site after the slow start they had against Detroit earlier in the week. Against the Red Wings, it took the Washington offense more than 14 minutes to register a shot on goal. On this night in Pittsburgh however, Capitals players were skating with a purpose.

Hockey is a funny mistress though. In the Detroit game, the Capitals remained competitive only because goalie Jose Theodore played his best game since joining the Caps – stopping 44 shots and even picking up an assist in a 3-2 victory. Well, two nights later, the Capitals skaters looked much more up to the task while Theodore did his best to give the game away early.

When Penguins forward Sidney Crosby tapped in a “gimme” goal just over four minutes into the first period, there was no one to blame but Theodore. That’s because, after defenseman Karl Alzner did everything imaginable to keep the puck from crossing the goal line (see photo above), Theodore stood there as if he’d already come to grips with being down 1-0.

Seriously, we’re not sure if Theo thought the referees had already signaled for a goal or what, but he basically stood there as Crosby scored one of the easiest goals of his professional career.

“I pretty much messed up,” Theodore said. “I didn’t want to stop it and play it in that restricted zone and then it went between my legs. Then I thought I had it and I didn’t have it. It tested [my] mental toughness.”

Caps forward Mike Knuble tied the game at 1-1 10 minutes later, tapping in a rebound after forward Alex Ovechkin drove to the net. Like his other 13 goals this season, Knuble’s tally came from close range and wasn’t pretty, but it’s exactly the kind of goal the Capitals didn’t score a year ago.

The Caps got their first lead of the night on an Eric Fehr goal just over two minutes into the second period, but the Penguins responded less than 30 seconds later on another goal Theodore would like to have back. Pens forward Nick Johnson scored his first NHL goal when Theodore failed to haul in a rebound and the game was tied once again.

Kris Letang put Pittsburgh up 3-2 halfway through the second period moments after Caps defenseman John Carlson came out of the penalty box, and momentum once again shifted to the Penguins.

With less than five minutes remaining in the second period, the Penguins were finally whistled for an infraction. This was noteworthy because, up until that point, Pittsburgh had gone 116 minutes against the Capitals without being called for a penalty (dating back to the playoff series last year).

Ovechkin scored a powerplay goal on a wrist shot from the blueline that evaded Pens goalie Brent Johnson and the game was once again tied as we headed into the third.

Caps forwards Tomas Fleischmann and Nicklas Backstrom (powerplay goal) scored less than a minute apart in the early moments of the final frame and the Caps cruised to victory. Ovechkin added an empty netter to round out the scoring and the Capitals won for the eighth time in the nine games since Ovechkin became team captain.

“We just wanted to win this game, it doesn’t matter how,” Ovechkin said. “All this group was really concentrating. I think we deserved this win. It was a pretty big game for everybody and mentally we were ready.”

Theodore overcame his shaky start to win his fifth straight game in net, stopping 35 shots on the night. The Caps netminder has allowed three goals or less in seven straight games. But the difference against Pittsburgh was the Capitals’ red-hot powerplay, which took just two shots during the man advantage and scored on both of them. In fact, the Caps special teams unit has now converted four straight powerplays on four straight shots.

“They’re an unbelievable team,” Ovechkin said of the Penguins. “We want to improve, and we want to gain that spot where they were last year. If we do everything that coach says, I don’t think anyone can stop us.”

That being said, at the end of the day, this game was only worth two points. Same as every other win. Just because the Caps earned it against the Penguins doesn’t make it more valuable than any of the 31 other victories they’ve picked up this season.

“We’re happy we win, but still, it’s over and we have to be ready for next game,” Ovechkin said.

The Capitals will play Pittsburgh three more times during the regular season, but it’s safe to say that if Ovechkin and friends plan on making an extended run in the playoffs this season, they’ll have to go through the Penguins in the process. And while regular season wins are nice, playoff wins are what really count in this rivalry.