what would auerbach do? 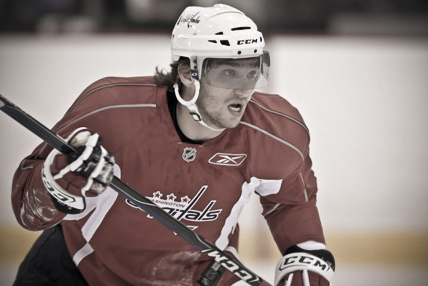 Years ago, Washington Capitals owner Ted Leonsis was fortunate enough to have lunch with Red Auerbach, the legendary architect and mastermind behind the Boston Celtics.

During this occasion, Leonsis took the opportunity to ask Auerbach for his advice on how to handle star players. This seemed like a wise decision, considering his lunch buddy earned a combined 16 NBA championships as a coach, general manager and team president of the Celtics.

Leonsis must have figured he was in the presence of one of the most successful men in professional sports history, so why not pry for some insider’s knowledge. Fortunately for all of us, Auerbach shared some of his insight.

“We’re lucky that Alex is a world-class player, but he’s even a better person – and the fan base knows that,” Leonsis said.

With that quote in mind, we recently had the chance to chat with Capitals general manager George McPhee on how much character and similar attributes come into play when debating whether or not to sign a player to a mega contract.

Since he was drafted first overall in 2004, Ovechkin has known no boundaries. He’s become the face of the franchise, one of the game’s most gifted players and, most recently, the captain of the Capitals.

“He’s actually better than we could ever have hoped for going into the draft,” McPhee said. “We’re lucky to have him. He’s been a leader since he’s been here. It was time to put the captaincy on him.”

Like McPhee said, the Caps are lucky to have Ovechkin. That’s’ why the team had no problem signing their star player to a 13-year contract extension worth $124 million in 2008. They knew he was a player they could build a team around and jumped at the chance to do so.

That same year, another local franchise made a long-term commitment to a star player. After he opted out of his contract, the Washington Wizards signed guard Gilbert Arenas to a max deal, which came out to six years for $111 million.

At the time, we couldn’t understand why the team would dedicate such an investment into a guy who we often refer to as a “one-legged, me-first point guard.”

For starters, Arenas has played just 47 games during the last three seasons. Thanks to a knee injury that required multiple surgeries and his most recent antics involving hand guns and gambling debts, Arenas is off the court much more often than on it. Excuse the pun, but that’s not getting a lot of bang for your bucks.

And when he’s on the court, you honestly never know which Gilbert is going to show up – whether it be Agent Zero, Hibachi or the guy who can’t hit free throws with the game on the line.

We don’t blame the team’s late owner Abe Pollin or general manager Ernie Grunfeld for being seduced by the game-winning shots and quirky shenanigans. But, at the same time, it seems they turned a blind eye to the moody diva who often times put himself in and removed himself from games without regard for his coach.

He’s also the same player who, if someone hurt his feelings, decided to stage a protest by refusing to shoot the ball or similar “look at me” sideshows. Or spent halftime of NBA games playing online poker. Or decided to ditch the team and rehabilitate his injuries on his own.

Without even going into his latest incident involving illegal firearms and teammate Javaris Crittenton, there’s enough of a history here that the Wizards should have known better. Let’s go back to the conversation between Auerbach and Leonsis.

We defy anyone to present an argument in which Arenas comes across as the team’s best person. We’re not suggesting that he’s not a bad person or in the words of John Riggins, that he has a black heart, but the truth is – with Gilbert, it’s all about Gilbert. If you’re looking for a locker room leader who is unselfish and always willing to put the team first, he’s not your man.

Honestly, that would be Wizards forward Antawn Jamison. But at 33 and with his complete inability to play defense, he can’t be considered a long-term solution in D.C. either. So, this may come as a surprise, but what we’re saying is no one currently on the Wizards should be signed to a $100-million deal.

Things are so bad for the Wiz that the one building block they could use as a cornerstone for the franchise – forward Caron Butler – is actually the guy having the hardest time adapting to the Flip Saunders offense. Go figure.

Dark days are ahead for the Wizards, but honestly, most of what comes next is because the team chose to commit to a player like Arenas. People are hoping that somehow the franchise is able to get a “do-over” by voiding his contract, but it’s foolish to get your hopes up. The actions of Ron Artest (fighting fans) and Latrell Sprewell (choking his coach) weren’t enough to get their respective contracts voided. Why would a downtrodden team like the Wizards be any luckier?

Coming from Tennessee, where he anchored one of the nastiest defenses in football, Haynesworth came to Washington with the highest of hopes. If the Redskins had a top five defense without him, the sky was the limit with Fat Albert, right?

Not so fast, sweetheart.

Haynesworth’s first year in Washington didn’t exactly go as planned. While the defensive line play and sack totals improved with the big guy in the lineup, people mostly wanted to focus on when he wasn’t on the playing field.

Haynesworth missed four games due to injury last season. In the 12 games he was in the lineup though, critics loved to point out how often Haynesworth was either standing on the sidelines or lying on the ground. Whether Fat Albert was hurt or simply faking injury to catch his breath is up to personal interpretation. Either way, it brings us back to basics:

Ovechkin is the best goal scorer in hockey, and yet, anyone familiar with the superstar knows he’s just as happy celebrating when a teammate puts the puck in the net. He truly is a team player in every sense of the word.

Haynesworth, on the other hand, prefers to be a loner, with many of his teammates admitting they know very little about him and have almost no communication with him on or off the field.

The only time it was suggested that Haynesworth attempted to bring the team together was when Haynesworth reportedly attempted to get his teammates to stage a protest by showing up late to practice Christmas day when he was unhappy with Greg Blache’s defensive system. This, of course, was reported after Haynesworth went public questioning why the team would even bother to sign him if they weren’t going to use him the way he thought they should.

Basically, the few times he’s bothered to open his mouth, Haynesworth has primarily been concerned with Haynesworth. Yes, he has said positive things about his teammates, but did so during the same conversation he called out his team’s defensive coordinator. Not exactly what you’d want to hear from your “best person,” huh?

We don’t want to speak on behalf of Leonsis or anyone else, but Haynesworth’s action don’t really seem to go with Auerbach’s guidelines. You get the feeling that these leaders would probably sacrifice having a supreme talent like Haynesworth or Arenas around for the good of the team.

No one knows for sure how Leonsis would handle Haynesworth unless Daniel Snyder improbably decides to sell the Redskins and Leonsis swoops in to take over the burgundy and gold. Things get interesting though with the Wizards, a team Uncle Teddy can and will acquire if he wants to. We’ve seen what he’s been able to do with the Capitals, it’ll be even more interesting to see what he can do in his second act should he ultimately decide to take on Arenas and the Wizards.

We have no doubt that if he decides to acquire this town’s beleaguered basketball franchise, he’ll continue to follow the guidance of the great Red Auerbach as he tries to turn the Wizards into something more than a national punchline. Those words of wisdom have helped turn the Capitals into a model franchise in every way. Wizards fans can only hope Leonsis brings their favorite squad more of the same.

And for the love of God, if this article does nothing else, please let it serve as a warning to owners debating whether to sign a player to a $100-million deal. Say it with us: