theodore the difference versus detroit 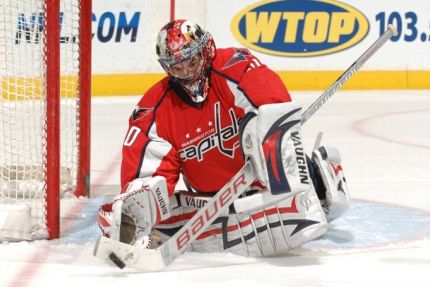 The Washington Capitals are scary good. That much is clear after watching the Caps defeat the Detroit Red Wings 3-2 in a game they were thoroughly outplayed for most of the night.

The biggest problem with the Capitals is that they seemingly know how good they are and continue to find ways to earn two points in games they have no business winning.

Understanding that the regular season is a grind and that it’s impossible to play perfect hockey for 82-consecutive games, this is a team with supremely talented players who, for better or for worse, know that on some nights they can give less than 100 percent and still walk away with a victory.

“We were playing like a mites or squirt team the first two periods,” said forward Matt Bradley.

We’ve stopped trying to figure out which Caps team is going to show up on a given night. Detroit, while admittedly coming into this matchup with several marquee names nursing injuries, is still the league’s elite franchise. For that reason alone, we assumed the Capitals would bring their ‘A game.’

Of course, that couldn’t have been further from the truth. Washington played an uninspired first period – tying a season low for shots in a period with three – while the Red Wings skated circles around the Caps as they unloaded 15 on net in the opening frame.

The only reason the game remained close was because goalie Jose Theodore played the best game we’ve seen from him since he joined the Caps. Theodore was a one-man show in the first period, making save after save against an aggressive Red Wings attack while his teammates took more than 14 minutes to register their first shot on Detroit goalie Chris Osgood.

The fact that the game was still tied 0-0 after the opening 20 minutes was simply astounding. When Red Wings forward Dan Cleary scored on a backhander just over four minutes into the second frame, you got the sense that Theodore had done everything he could to keep this game competitive, but his teammates were simply not up to the challenge.

That’s when Bradley woke up the Verizon Center with his eighth goal of the year, thanks to a pinpoint pass from center Boyd Gordon. Whether he’s dropping the gloves to protect a teammate or scoring a goal when least expected, Bradley continues to be a much-needed spark plug for this Caps team. He might not get the attention that most of his teammates enjoy, but he deserves to be recognized for doing anything and everything he can to help his team win games.

Detroit defenseman Brian Rafalski scored with less than nine minutes to play in regulation to give the Red Wings their second lead of the night, but again, they were unable to close out the Caps.

With Red Wings forward Todd Bertuzzi in the penalty box for tripping, Capitals center Nicklas Backstrom took over. Although he’s primarily known as a setup man, Backstrom did his best Alex Ovechkin impression, skating and weaving through a series of Detroit defenders before rifling a puck past Osgood for his 20th goal of the year. There was a time when opposing teams could bank on Backstrom passing and Ovechkin shooting. Not anymore.

If Backstrom sees a shot, he’s not afraid to take it.

“Yeah, I don’t know what happened,” Backstrom said. “I’ve just been shooting more and more lately and I’ve been enjoying scoring goals. Last year, I was searching for passes every time down the ice, but now I’m going to the net, shooting more and those kinds of things.”

With the game once again tied, center David Steckel stepped up and gave the Caps their first lead of the night – just 46 seconds after Backstrom’s powerplay goal. The play started with forward Alexander Semin firing a puck on net. Steckel was planted in front of the net attempting to screen Osgood, and when the puck came his way, he got enough stick on it to redirect the puck into the back of the net.

“It was just lucky,” said Steckel of his first goal on home ice this season. “I just happened to be in the right place at the right time. I thought it went wide at first.”

Bradley, Backstrom and Steckel provided the scoring, but none of it would have mattered if not for the superb showing by Theodore, who finished the game with 44 saves and even picked up an assist on the powerplay goal. The only way he could have been a bigger factor on this night would be if he’d had enough of his teammates’ half-assing it and scored a goal himself.

“That’s probably the best I’ve seen him,” said Capitals coach Bruce Boudreau of Theodore. “I’m watching him going, ‘this must’ve been how he was when he won the Vezina and the Hart in Montreal that year because without him, it could very well have been 6-0 at the end of the first period.’”

Theodore has been playing out of his mind these days, winning his last four games while posting a 1.68 goals against average and a sparkling .951 save percentage. This, mind you, comes at a time when fellow netminder Semyon Varlamov is still battling injuries and rookie goalie Michal Neuvirth has been pulled twice in recent games for shaky performances.

But back to our larger point. The Capitals resembled the team we’ve come to know and love for maybe 20 minutes against Detroit. For the other 40 minutes, they went through the motions and looked like a team participating in an optional practice.

Defenders kept getting caught out of position. Forwards routinely made sloppy passes or try to force to puck through traffic. Two of the team’s biggest offensive weapons – Alex Ovechkin and Mike Green – failed to register a single shot on net.

And yet, thanks to Theodore, the Capitals walked away with a victory in a game they probably deserved to lose. Like we said in the beginning, it’s scary to see what this team is capable of.

Even on nights when they’re only clicking for a matter of minutes, they can still be good enough to steal a win against one of the most respected franchises in hockey. It might cause Boudreau to lose what little hair he has left, but it makes for some of the most exciting sports entertainment D.C. has seen in a long, long time.