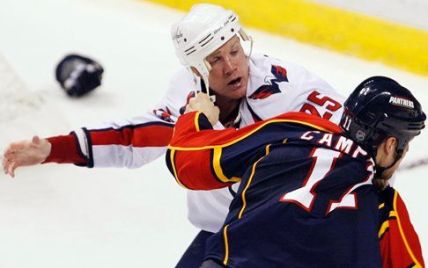 We have to admit, we were excited when the Washington Capitals acquired gritty forward Jason Chimera in a trade for captain Chris Clark and defenseman Milan Jurcina.

While most people chose to focus on what little they knew about Chimera – namely the incident involving Chimera and forward Alex Ovechkin when the Caps faced off against the Columbus Blue Jackets – we looked past it completely.

To us, Chimera brought aspects to Washington that Clark simply didn’t possess in his skill set. For starters, the 30-year-old is easily one of the fastest skaters in the NHL. In a game where you absolutely have to keep your feet moving, Chimera is willing and able to fly around the rink. If the puck is in the corners, he’ll throw his body around and dig it out. If the puck is in the open ice, he can switch to a gear few players can match.

We’re not out to badmouth Clark, but by the end, he was more of a team spokesman than an on-ice contributor. He was a well-respected guy in the locker room and always available to answer any and all questions, but more times than not, once the game started, he was a non-factor.

If we’re being honest, we don’t care if Chimera ever says a word to the press or keeps to himself away from the rink. As long as he makes plays like he did last night against the Florida Panthers, all the rest is irrelevant.

With the Capitals trailing 2-0 to yet another inferior opponent, Chimera provided a much-needed spark. Just 18 seconds into the second period, Chimera used his blazing speed to blow past the Panthers defense and score an unassisted tally. The play was exactly the kind of individual effort that Clark could no longer provide for the Capitals, and, as an added bonus, it really seemed to give Chimera an extra boost of confidence.

The Caps gave up two more goals to Florida, which meant the end of the night for goalie Michal Neuvirth and for the second consecutive game Capitals coach Bruce Boudreau was forced to go to the bullpen in relief of his young goaltender.

With less than four minutes remaining in the period, Chimera got the offense going again – this time assisting on defenseman Brian Pothier’s fourth goal of the season. To cap off the period, Chimera then dropped the gloves with Panthers center Gregory Campbell. A goal, an assist and a fight – all in less than 20 minutes of action. That, my friends, is what we call the Gordie Howe hat trick.

And if you’re Chimera’s teammate and you see him doing anything and everything to help his team wake up, you have to pick up your pace, right? If not, then you’re in the wrong sport. You should immediately leave hockey and become a basketball player, where it’s socially acceptable for Kobe Bryant to play one-on-one while his four teammates stand around and watch.

Third-period goals by Ovechkin and center Nicklas Backstrom tied the game at 4-4, while Theodore stood on his head several times in the final two minutes to preserve the tie at the end of regulation. Overtime provided even more excitement, with the Caps and Cats all but abandoning defense in hopes of walking away with two points. But Theodore and Panthers goalie Tomas Vokoun remained up to the challenge and the game headed to a shootout.

Forwards Brendan Morrison, Brooks Laich and Tomas Fleischmann each scored in the shootout to secure the victory, but for our money, the star of the night was Chimera, who had his first real breakout performance since arriving in town last month.

In his first five games in Washington, Chimera had just one assist. Anyone watching Chimera during his first few games could tell that he was struggling to adapt to a completely different brand of hockey. This, of course, was to be expected when a player leaves Ken Hitchcock’s defensive-minded lockdown mentality in favor of Boudreau’s wide-open style of play.

Think of it this way – if all you’re ever allowed to do is backcheck and then one day the shackles are suddenly removed and you’re actually encouraged to play on both ends of the rink, well … it’s safe to say you might take a couple games to adjust to your new way of life. But it’s a pretty safe bet that once he gets acclimated to his new situation, Chimera is going to relish playing for Boudreau. At the same time, the Caps will benefit from his sandpaper style of play.

If his production in the last three games is any indication (two goals and two assists), Chimera is already beginning to adjust to his new situation. And while secondary scoring is absolutely vital to any long-term success for the Capitals, the truth is, the team will be just as happy with everything else Chimera brings to the table.

Setting up teammates, hustling on every shift and not being afraid to drop the gloves when necessary are traits that are only going to enhance Chimera’s status both with his teammates and with Caps fans. Consider last night step one in the right direction.