as neuvirth goes, so do the caps 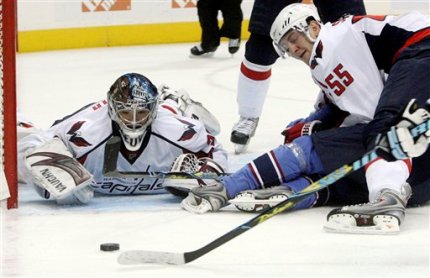 Instead of dwelling on the negative in that statement (i.e. – the state of our favorite football team), we’ll turn our attention to the only winner in town.

In wins over the Montreal Canadiens, Ottawa Senators and Atlanta Thrashers, the Caps have once again looked like one of the NHL’s elite – outscoring their opponents 17-5 during this recent three-game winning streak.

While the team is averaging just a shade under six goals a game during this recent explosion, the Caps’ recent success should actually be attributed to the team’s improved play in net.

For the first two months of the season, Caps goalie Semyon Varlamov absolutely looked the part of a bona fide NHL starter, posting a 12-1-2 record with a 2.21 goals against average and a .924 save percentage. He was a legitimate rookie of the year candidate and looked like a steady veteran in net, as opposed to Jose Theodore, who continues to have an up and down season in net.

When Varlamov was sidelined in early December with a groin injury, Theodore became the go-to guy and goalie Michal Neuvirth was called up from the Hershey Bears. We’ll admit that we were unsure of the impact these moves would have on an otherwise-promising Capitals season. Sure, Neuvirth was rock solid as he backstopped the Bears to a Calder Cup win last season, but there’s always a learning curve when youngsters get their first real taste of NHL action.

As to be expected, Neuvirth was a little rough around the edges initially. In his first two starts, the 21-year-old went 0-2 with 4.50 goals against average and a .844 save percentage. Beyond the stats though, Neuvirth looked like a goaltender who was swimming in his own head. Instead of just letting the game come to him, Neuvirth looked like he was thinking and pressing too much.

Since then however, Neuvirth has looked every bit the part, posting a 5-2 record with a .928 save percentage. And, as funny as it sounds, as Neuvirth has gone, so too have the Capitals.

Anyone looking for a sign of faith that the Capitals believe in the young netminder need only glance at the recent box scores and notice that Neuvirth has been the starting goalie in seven of the team’s last nine games. While Theodore continues to sit and Varlamov tries to get healthy, the team has happily turned to Neuvirth.

Neuvirth’s most recent game might have been his best of his professional career. Saturday night, the Caps traveled to Atlanta to take on a struggling Thrashers squad. Many of Atlanta’s current issues revolve around superstar forward Ilya Kovalchuk and whether or not the Thrashers will be able to retain him, but he was flying around the ice throughout the first period of the game Saturday night.

And yet, even with one of the premiere snipers in the game crashing the net, Neuvirth didn’t flinch. Several times he stonewalled Kovalchuk from point-blank range and finished the first frame with 18 saves. Meanwhile, with Neuvirth carrying the team early on, the offense finally got going. Even though the Thrashers looked to be the better team for much of the opening period, they found themselves trailing 3-0 on the scoreboard.

Demoralized, the Thrashers mailed in the rest of the game, the Capitals cruised to an easy 8-1 beatdown over the divisional opponent and Neuvirth finished the game with 38 saves. But this effort shows, on a larger scale, just what this team is capable of.

Any team featuring two-time MVP Alex Ovechkin, as well as Nicklas Backstrom, Alexander Semin and Mike Green, is going to score goals. With secondary scoring coming from guys Tomas Fleishmann, Brooks Laich, Brendan Morrison and Mike Knuble, the points are coming from enough different places that it’s impossible for opposing teams to just key in on one line.

But playoff hockey is very different than regular-season hockey. In the post season, open space is a rare commodity. Beautiful end-to-end breakouts happen less frequently as teams attempt to play a safer brand of hockey. Goals typically come from five feet or closer and a team is only as good as the goaltender carrying them on their playoff run.

When Varlamov went down due to injury, there was every reason to be concerned. Theodore can be great one game, and then fall apart the next. At this point in his career, he’s simply not a guy you can count on with much confidence to backstop a run at the Stanley Cup.

But the emergence of Neuvirth has enabled the Caps to keep their place among the league’s elite. More importantly though, it’s shown the team that come playoff time, if Varlamov isn’t ready to go, then Neuvirth might just have another championship run in him.