backstrom comes up big for caps 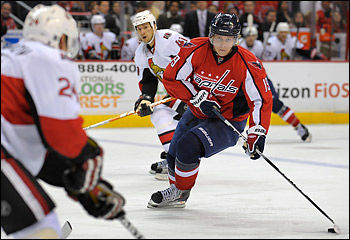 There have been times over the last couple seasons where the Washington Capitals have been accused of playing down to the level of their opponent.

In related news, the Ottawa Senators came to town without two of their best players — forwards Daniel Alfredsson and Jason Spezza were both sidelined due to injuries — and a pedestrian 6-10-1 record on the road this season.

Thankfully, the Caps got off to a hot start by scoring two first-period goals and cruised to an easy 5-2 win over the Sens. Grinders Boyd Gordon and Mike Knuble each tallied in the opening frame to seemingly rattle goalie Pascal Leclaire. Gordon’s line in particular, with Dave Steckel and Matt Bradley, really looked good early on and gave the once-slumping Capitals the early lift they needed.

“We don’t score that much, the fourth line,” said Gordon, who scored his first goal in 36 regular-season games. “But when we do, I think our chances of winning really increase because we’re not expected to. So when we do it’s a big bonus.”

Knuble has also had an up-and-down season. He came into the game with just one goal and two assists in his last eight games, but he cashed in late in the first period after a give-and-go with forward Nicklas Backstrom.

The Caps went into the first intermission with a 2-0 lead, but began to show signs of letting up against an inferior opponent. When Senators defenseman Chris Phillips scored to cut the lead to 2-1, the mood began to change at the Verizon Center. That is, until Backstrom took over.

“He showed a lot of leadership because I thought we were floundering a little bit in the second period when it was 2-1,” said coach Bruce Boudreau of the 22-year-old center. “Then he comes out in the third period and gets two goals. He was just determined. That’s what’s making him one of the best.”

Backstrom’s first goal of the night came just 26 seconds into the final frame and was from a seemingly impossible angle. Backstrom received a pass from forward Alex Ovechkin and, with the Swede almost parallel to the goal, he snuck the puck past Leclaire.

“I saw the goalie was cheating a little bit,” he said. “He left the post, so I thought maybe I should try.”

Any momentum Ottawa had was now gone, and Backstrom’s best work was yet to come.

With less than 10 minutes remaining in the game, he struck again. This time, Backstrom entered the zone and saw a wall of defenders. Over his shoulder he could hear Ovechkin hollering for the puck, and apparently so too could Leclaire. Because when Backstrom dug in and crashed towards the net, it caught the Senators goalie off-guard and Backstrom finished the play with a beautiful wrap-around goal to put the game officially out of reach.

In the post-game locker room Backstrom attempted to downplay it, calling it a “lucky goal.” But that wasn’t the case. The Caps needed someone to make a play and in both instances Backstrom showed an aggressive streak that people may not know he has.

On both plays Leclaire and the Ottawa defense looked like they got caught anticipating a pass from Backstrom to Ovechkin. In the past that wasn’t necessarily a bad move, but this year Backstrom is playing a more well-rounded game.

If they were paying closer attention to his recent goal-scoring surge, the Senators would know that Backstrom is now second on the team in goals with 17. And with 49 points in 43 games, Backstrom now stands eighth in the league in scoring. He’s more than just a setup man. He’s also a legitimate goal scorer, who has five multi-goal games this season while converting on better than 15 percent of his shots.

Just as important though, was the fact that the top-line center refused to let this team’s bad habits creep back into their game. When a lesser opponent began to seize momentum, he did what was needed to ensure the Capitals sent the hometown crowd home happy.

“There’s no easy games in the NHL and everyone knows that,” he said. “We have to be at the top of our game if we want to win – especially now, before we go out on the road. This was a huge two points.”