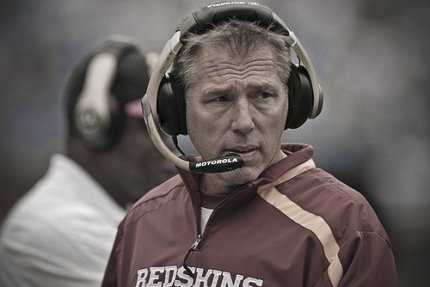 Got some bad news for you – Jim Zorn is nothing more than a poor man’s Steve Spurrier.

Yeah, we know. There’s no easy way to digest it. And honestly, we contemplated even bringing it up this close to the holidays and all, but we figured if you had to hear it, you’d want the news to come from us.

This information is especially tough to swallow after reading former safety Matt Bowen admit that the Washington Redskins gave up on their lame duck coach at the end of the Spurrier era because they knew he was a goner. Couple that with quarterback Jason Campbell’s comments from last week, when he said he thought some of his teammates might have quit on the team and it really hits home just how bad things have gotten.

For those fans who either aren’t familiar with Spurrier’s two seasons in Washington, let us break down just how memorable things were with the “Old Ball Coach” in our lives. For starters, he was the head coach of the Redskins for the 2002 and 2003 seasons. The Redskins went 12-20 during that time.

The ‘Skins started the 2002 season 4-4 and remained middle of the pack all season long, finishing 7-9. Year 2 the burgundy and gold regressed, finishing a disappointing 5-11. In 32 games under “Darth Visor,” the Redskins scored 594 points, which comes out to 18.5 points per game. Sadly, the Redskins defense gave up 737 points over the same span, which equals 23 points per game.

In unrelated news, by the time Zorn is no longer the head coach of the Redskins, he will have served a two-year sentence. With one game remaining, the Redskins are currently 12-19 under Zorn. So unless the ‘Skins can pull off a huge upset against the 12-3 San Diego Chargers (who happen to be coached by Norv Turner, a guy who might not be inclined to rest his starters against his former employer), Washington will just so happen to have the same 12-20 record as they did from 2002-03.

As you know, the ‘Skins started off the Zorn era an impressive 6-2. But then the wheels came flying off and the team finished 8-8. Year 2 the maroon and black regressed, posting a 4-11 record. In 31 games under Zorn, the Redskins have scored 511 points, which comes out to 16.5 points per game. The Redskins defense has given up 609 points over the same span, which equals 19.6 points per game.

So yeah, with one game remaining, the Redskins offense averages two less points per game under Zorn than they did with Spurrier drawing up plays for Patrick Ramsey and Danny Wuerffel. Put that in your pipe and smoke it.

Digging a little deeper, we see that quarterbacks under Spurrier completed 53.7 percent of their passes for 45 touchdowns and 36 interceptions. They threw for an average of 212 yards per game with a QB rating right around 73.0. Oh, and they were sacked 81 times in two years.

Again, with one game to go for Zorn, the numbers show that his quarterbacks complete 63 percent of their passes for 33 touchdowns and 22 interceptions. They threw for an average of 219.5 yards per game with a QB rating just under 85.0. They’ve been sacked 82 times.

That means Zorn’s quarterbacks have completed 10 percent more of their passes for roughly seven more yards per game, while throwing 12 less touchdowns and 14 less interceptions than Spurrier’s signal callers. Protecting the quarterback is clearly optional with both coaches.

That translates to an average of 1,771 yards (110.5 yards per game) and nine touchdowns per season.

In 2009, the Redskins ground game, featuring Portis/Ladell Betts/Rock Cartwright/Quinton Ganther, has rushed for 1,444 yards (96 yards per game) and eight touchdowns.

We’ll spare you the receiver comparisons, save for one exception. Here’s our favorite stat when comparing the pass catchers of both eras:

We realize that we’ve thrown a ton of stats and numbers at you with this, but the good news is we gave you the ending up front, Tarantino style. All of this is designed to show you that the last two years have been someone’s idea of a cruel joke. We’re all essentially Bill Murray in Groundhog Day, living the same football season over and over.

Spurrier looked completely overmatched in a sweater vest and his trademark visor. Zorn switched it up with the spiffy haircut and more traditional sideline attire. But at the end of the day, it’s the same inept offense losing week in and week out by less than a touchdown.

After the Spurrier experiment mercifully came to a conclusion, owner Daniel Snyder appeased the masses with the return of a Super Bowl winning coach by the name of Joe Gibbs. If history is to repeat itself, then we should expect similar results, with the owner turning the franchise over to a big-name coach with multiple Super Bowl wins on his resume.

Sure, we could point out that Gibbs never came close to replicating his success from his first go-round, but honestly, we’d rather save that for another day. You know, give us something to write about four years from now.