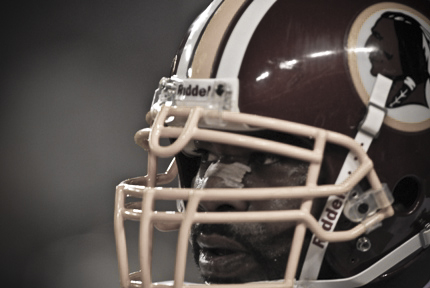 Not only were the ‘Skins shut out against the hated rival, the Dallas Cowboys, 17-0, but the entire team – offense, defense, special teams and coaching – looked woefully unprepared. How that is even possible in Week 16 is beyond us.

For the second week in a row, the Redskins won the coin toss. But this time, they decided to mix it up – electing to receive first. After four-straight plays involving running back Quinton Ganther, Redskins quarterback Jason Campbell decided to find another target. Unfortunately, this decision apparently caught tight end Fred Davis off guard, because the ball bounced off his hands and was intercepted by Cowboys cornerback Terence Newman.

Tony Romo and the Dallas offense took the field and never looked back, as they put together a seven-play, 36-yard drive that ended with a four-yard touchdown pass from Romo to mediocre wide out Roy Williams. The Cowboys were up 7-0 barely six minutes into the game, and whether they knew it or not, officially had enough points to win this game.

The next eight Redskins drives all had one thing in common – they ended with a Hunter Smith punt. Before Washington’s final drive of the night, which ended with a fourth-down pass sailing over the head of rookie receiver “Free” Marko Mitchell, the team’s best drive was a 10-play, 38-yard effort that still didn’t do enough to cross midfield.

The announcers did their best to throw Campbell under the bus, but the truth is, his offensive line has reverted back to earlier in the season when they were barely capable of slowing defenders as they took turns crushing the Redskins quarterback. Pretty much all night long Campbell had time to drop back three steps and look at his first receiver. If option #1 was covered, he didn’t have time to even look for his next target because Dallas defenders were already closing in for impact.

Ganther finished the game with 13 yards rushing. Marcus Mason finished with 11. Rock Cartwright had 6. So basically, there was no running game to help shoulder to load. And since the Cowboys were ahead all game long and the Redskins offense looked completely lost, their defense could be as aggressive as they’d like.

We guess we could mention that guard Mike Williams and tackle Stephon Heyer both got banged up during the game, and therefore the Redskins offensive line was basically comprised of any fat guy with a helmet. But honestly, the line wasn’t doing any better with Williams and Heyer in against Dallas.

The big news heading into the game was that Redskins defensive tackle Albert Haynesworth sounded off against defensive coordinator Greg Blache for the way he’s been used this season. After being sent home for being late to practice Christmas day, “Fat” Albert dialed up the Washington Post and let loose, essentially saying he’s got great players around him, they just don’t have a good enough defensive scheme to maximize this talent.

And here’s the thing – Haynesworth is absolutely 100 percent correct. Blache is an egotistical know-it-all who seemingly has no interest in adapting his defense to best suit the individual talents of his players. But none of that matters when Haynesworth is a nonfactor just days after calling out his boss.

Finishing with three tackles and two quarterback pressures isn’t going to cut it, not when you know all eyes are on you after you rip into Blache. We don’t care if you have to just say “screw it” and start calling your own audibles at the line; you’ve got to finish a game with more than just one solo tackle during a primetime game.

If we had to pick one play from Sunday night to summarize this 4-11 season, it would be a 69-yard catch and run by Cowboys tight end Jason Witten. Now, we’ve got nothing against Witten, who is consistently one of the better tight ends in the NFL, but let’s be honest – he’s a slow white guy. He’s not someone known for yards after the catch.

But, as has been the case all year, anything is possible when Redskins safety LaRon Landry is involved. Once Witten caught the ball, he turned up field and took off (well, as best he could). Landry hustled his tail off and tracked him down. Unfortunately for ‘Skins fans, LaRon then “pulled a Landry” and completely whiffed on the tackle, which enabled Witten to gain an extra 35 yards and gave him the longest reception of his career.

One of these days, Landry is going to realize that, as a safety, he’s the last line of defense and he simply cannot try to hulk smash every opposing player in his vicinity. Until that time, he’s nothing more than a liability in coverage (which is what you like to hear about someone drafted with the sixth overall pick).

Since Bruce Allen was brought in as the new general manager, the Redskins are 0-2.

Sadly, they’re even worse than that winless record would indicate, if that’s even possible. In two home games against divisional rivals, the Redskins have been outscored 62-12. Maybe Allen is better at finding a silver lining than we are. Otherwise, he, like anyone else watching the Redskins on primetime TV these last two weeks, must be thinking “How quickly can I blow this thing up?”

Over the last two seasons, which we’ll simply refer to as “The Jim Zorn era,” the Redskins are 0-7 in primetime games while being outscored 166-62. We’re not sure what the man even does anymore other than post-game press conferences, but he needs to go. Same for Blache. Same for Danny Smith, the special teams coach.

Allen, once he names Mike Shanahan or whoever as the next head coach, should also feel free to get rid of any and all players currently affiliated with the burgundy and gold. This team, regardless of their inept head coach, should not be allowed to go winless in the NFC East. Failing to win a single game against the Cowboys, Giants and Eagles means heads should roll. Absolutely no one should be safe. This team has been so mediocre for so long, why should we go to bat for anyone? It’s time for a change. The ball started rolling when Vinny Cerrato left town. The sooner we can send this entire coaching staff and half the roster with him, the better.