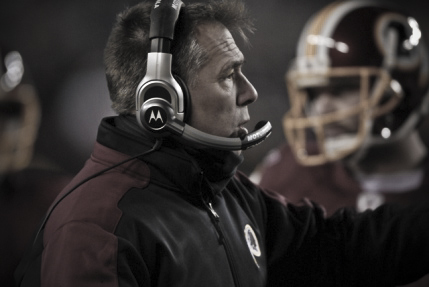 1. “There’s a Place in Hell for Me and My Friends” by Morrissey

The Washington Redskins won the coin toss … and that’s it.

Pretty much every other aspect of the team’s Monday Night Football contest against the New York Giants falls in the category of debacle, as the Redskins got annihilated 45-12 in front of a national audience.

To say this was unexpected is a vast understatement. Heading into the game, ‘Skins fans had every reason for cautious optimism. The Redskins offense finally had some momentum, putting up 30 points in back to back games for the first time in the Jim Zorn era.

The beleaguered offensive line had done well enough to get by and quarterback Jason Campbell had thrown for 1,749 yards, 11 touchdowns and six interceptions with a 92.3 QB rating in his last seven games. By no means were they competing with the ’07 New England Patriots offense, but they were at least looking competent after an embarrassing first two months of the season.

On the other sideline, the Giants came into this game heading in the opposite direction. After starting the season 5-0 and boasting the top-ranked defense in the NFL, the wheels had seemingly fallen off. Since then, New York had gone 2-6 and their defense has given up 40 points in a game three times.

Heading into this one, there was every reason to think that the Redskins were the team heading in the right direction, while the Giants were the team freefalling out of playoff contention. Sadly, this couldn’t have been further from the truth.

2. “It’s Hard to Walk Tall When You’re Small” by Morrissey

The defense is supposed to be the strength of the Redskins. After all, year in and year out, they consistently rank in the top 10 in the league, while the offense has seemingly struggled to score points since Norv Turner was drawing up plays for Michael Westbrook and Stephen Davis (when they weren’t sucker-punching each other).

Well, on Monday Night Football this defense was finally exposed for what it is – completely overrated. All season long they’ve allowed lengthy drives, regardless of the opponent. When they blitz the opposing quarterback (JaMarcus Russell aside), they almost never get there in time to disrupt the play. When they lay back in coverage, the quarterback – in this case, Eli Manning – has all the time in the world to dissect their secondary apart. And lord knows they’re completely incapable of getting a turnover.

The Giants’ opening drive completely set the tone for the entire evening. The Redskins attack was seemingly predicated on blitzing every down. New York, which had won six of the previous seven times these two “rivals” had faced off, apparently knew it was coming. So they allowed the Redskins defense to bull rush in, and then at the last minute, Manning pitched the ball over the first wave of attack to an open target, who then gained a large chunk of yards.

Their offense was stunning in its simplicity. Use the Redskins over-aggressiveness against them. Let them send the house, because you know they won’t get there in time and then once their guys are out of your way, dump the ball off to a target a few yards away and watch him pick up first downs in bunches.

When passing, Manning simply targeted whichever receiver was closest to safety LaRon Landry and Brian “I’m not really a linebacker” Orakpo. Once the passing attack had the Redskins defense on its heels, they simply handed the ball to the running back tandem of Brandon Jacobs and Ahmad Bradshaw (who rushed for nearly seven yards a carry on the night).

3. “How Can Anybody Possibly Know How I Feel?” by Morrissey

The offense … well … where do we begin? The offensive line, admittedly, had overachieved for much of the last month or so. Considering the line features Derrick Dockery, Casey Rabach and a bunch of spare parts, it was only a matter of time before they remembered they weren’t any good. Turns out last night was the night, and Campbell was battered and beaten worse than at any other point in his career (which is saying something).

After the game, Campbell looked more like a prize fighter than a quarterback, with his face swollen and his shoulder sore after suffering a stinger during the bout. For something like the third time this season, we found ourselves saying, “I wouldn’t blame Campbell one bit if he refused to get up off the ground until they surrounding him with a halfway decent supporting cast.”

Todd Collins came in relief once Campbell suffered the stinger near the end of the first half, but even then, Campbell refused to stay out of the game. Once the second half started, he was right back out there – ready for the next beating.

The special teams unit clearly was intent on putting the “special” in special teams. Seriously, more than anything else Monday night, their amateur performance is what stands out the morning after. The kick return team is so bad, that for much of the night, Devin Thomas was unable to even get back to the 20-yard line. When the offense did finally find the endzone, the special teams killed any shot of momentum by screwing up the extra point.

And then there was the fake fieldgoal attempt.

Honestly, if Danny Smith and/or Jim Zorn still have a job this week, then newly appointed general manager Bruce Allen clearly is already sleeping on the job. For those who missed it, the Redskins pulled out one of the dumbest trick plays imaginable just before halftime, while trailing 24-0.

The Redskins sent out their fieldgoal unit, and then shifted nearly everyone except holder Hunter Smith and snapper Ethan Albright to the left side of the field in what can only be referred to as the “Flying V” formation of Mighty Ducks fame.

The Giants saw this and smartly called a timeout. Now, think back to the Denver game, when the Broncos coaching staff was so inept, they managed to be surprised twice when the Redskins set up the play and then after a timeout, called it again. Let’s just say the Giants weren’t fooled.

Instead, when the ‘Skins were dumb enough to try and run the play a second time, the Giants sent four defenders up the middle and crushed Smith, who was barely able to get rid of the ball before being pummeled.

No NFL team should ever try this play. And if an NFL team is moronic enough to line up for this play once and the opposition is forced to waste a timeout, it can only be considered a success. But to try the play, which is destined for failure, when the defense knows it’s coming … well, that’s a “gotsta go” situation. If heads don’t roll, then you’re basically saying, “We are not a professional football team.” The rest of us may already knows this, but it’s not a good idea to confirm it.

5. “Break Up The Family” by Morrissey

The only good thing to come from this humiliating defeat is that it’s now clear that this team needs to be blown up. A month’s worth of close losses might have prompted some to believe this team was close to respectability. Clearly, that is not the case.

No one should be safe – whether we’re discussing players, coaches or even cheerleaders. Seriously, sweeping changes are needed if this organization is hoping to become respectable again for the first time in basically 20 years. Bruce Allen was step one. Step two is replacing Zorn, whether it’s with Mike Shanahan, Jon Gruden or some up-and-coming assistant coach we’ve never heard of.

Forget that his overall record as a head coach is 12-18. We’re now in a situation where the Redskins must defeat the playoff-bound Dallas Cowboys next week just so Zorn’s Redskins can improve to 4-8 against the rest of the division. How can you ever become a legitimate threat if you lose two thirds of your divisional matchups? The answer is – you can’t. Zorn is in over his head, and so too are the Redskins as long as he’s allowed to roam the sidelines.

At this point you’re better off just paying the man to stay home.