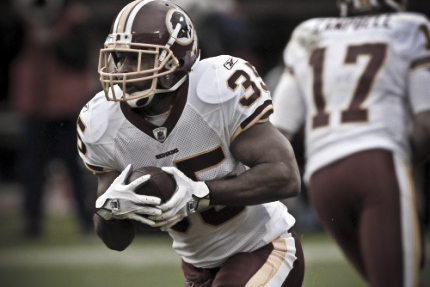 Last week, Washington Redskins running back Quinton Ganther started his first NFL game. In front of more than 250 friends and family members, the Richmond, Calif., native made the most of the opportunity – finishing the day with 93 total yards and two touchdowns in a 34-13 victory over the Oakland Raiders.

In the post-game locker room, Ganther even admitted that it was a day he would never forget.

Well, we caught up with Ganther heading into tonight’s game against the New York Giants to see if he’d come down from the emotional high of last week’s game yet and to see what he plans to do for an encore.

Has your first-career start become even sweeter now that you’ve had a chance to go back and watch the tape of the Raiders game?

It’s funny. You’re sitting here telling us that your first start wasn’t a good one. And yet, there are some folks out there already comparing you to Chuck Norris. You’re a guy who a month ago was looking for a job, and now that you’ve had some success, you don’t sound satisfied at all …

“I’m not a Chuck Norris. I’m not a badass,” said Ganther. “I’m Quinton Ganther, and I’m a guy who is humble. I’m a guy who comes to work and takes pride in this job, this opportunity. What people don’t understand is this is a blessing. Just to be sitting here in this locker room talking to you right now, this is a blessing. People would give up their right arm or leg for this. [Editor’s note: he’s right.]

“So you can’t ever get too big for yourself, you know what I mean,” Ganther continued. “You have to come out and work hard, because this can all be gone tomorrow. Like you said, a month ago I was looking for a job. And now I get an opportunity like this, I’m not going to take it for granted. I’m going to take advantage of it.”

Since you’re so new to town, Redskins fans are still getting to know you. What’s the scouting report on Quinton Ganther?

How is everything coming along as you get used to being a part of this locker room and getting more familiar with the Redskins’ offense?

“I’m from Richmond, California. I can go anywhere and fit in,” Ganther said. “That’s not even a problem. If I go to China, I’m gonna fit in somehow, some way. That’s just me. You’ve got to camouflage and get in where you fit in. There’s a lot of different personalities in here, so you’ve got to kind of just feed off them. They don’t have to get used to me. I have to get used to them because this is their locker room. I’m the outsider, so I’ve got to just adjust to these guys.”

What was your perception of the Washington Redskins before you got here?

“You know, I didn’t really have a perception of them because I didn’t watch too much of Redskins,” he said. “But now that I’m here, my perception is that this is a tough team. I mean, these guys go out every week and they fight hard. They fight hard every time and they really give you all they’ve got.”

This was a team that for the first two months of the season, struggling to put any points on the board. Now, you’ve got 30 points in back-to-back games. What’s going on?

“I just thinking we’re clicking,” Ganther said. “A lot of guys are really playing with confidence now. I think that everything in this offense is more detailed oriented now. Everyone is paying more attention to the minor details, the small things. And it’s those small things that add up and allow the big plays to happen. If you’re supposed to run a route at seven yards, and you run it at five or six yards, the timing of the whole play is off. Now, I think guys are really paying more attention to the smaller things.”

You’ve only been here a little while and there’s going to be plenty of uncertainty this offseason, but is our nation’s capital a place you’d like to stick around for a while?

“Most definitely,” he said. “I would love to stick around and be here, so I can get comfortable after I get my feet wet. God has a plan for me, and I’m just going to carry out the plan that he has.”

Redskins fans can only hope the plan is good for another couple of touchdowns and another blowout victory, this time against the Giants. But whatever happens the rest of this season and through the offseason, ‘Skins fans should feel lucky to have a guy as down-to-earth and humble as ganther in the mix. Well … either that or they could wish for a complete badass like Chuck Norris.