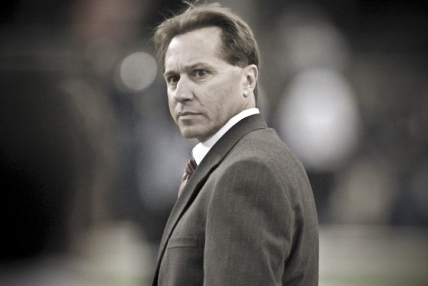 In what can only be considered a stunning turn of events, Vinny Cerrato has stepped down as the executive vice-president of football operations for the Washington Redskins effective immediately.

Cerrato has served in this role for the last two years, and previously served in five different roles, beginning in 1999.

In a statement, Cerrato said he has had numerous conversations with team owner Daniel Snyder over the last few weeks regarding the next steps for the club.

“We agreed that the franchise needs someone different in this position,” said Cerrato.  “I’m thankful to Dan Snyder and other members of his ownership team for the opportunities I’ve been given over the years.

“Of course, I am disappointed with this year’s results, but I strongly believe that with outstanding draft picks and encouraging performance by our younger players, we have laid a strong foundation for the franchise,”  Cerrato said.

Regardless of the reason, Redskins fans nearly across the board will view this as a sign of hope. That’s because Cerrato is almost universally viewed as a “yes man” for Snyder – someone who is perceived to enable a meddlesome billionaire’s desires to build the NFL equivalent of a fantasy football team.

Many coaches and players have come and gone over the last decade of mediocrity, but the one constant at Redskins Park has been Cerrato. And while model franchises like the New England Patriots, Pittsburgh Steelers and Baltimore Ravens have won Super Bowls by building through the draft and adding smart free-agent signings to round out their respective rosters, Cerrato and the Redskins have been content to win the offseason by overpaying in free agency and trading away draft picks for big-name players who typically fail to live up to expectations.

Why rebuild the oldest offensive line in football when you can use draft picks on Jason Taylor? Why waste a high draft pick on an interior lineman when you can add three pass catchers with your trio of second round picks?

This mindset is what drove Redskins fans crazy and triggered a near revolution earlier this season. And here’s the funny thing, had Cerrato not left, we’re hearing it would have been more of the same this offseason.

Even though Chris Samuels and Randy Thomas are seemingly incapable of staying healthy for any length of time, we heard from a very reliable source that if Cerrato was still calling the shots, the team was planning on using their first round pick in the upcoming NFL draft on a quarterback and their second-rounder on a running back.

The simple notion that a rookie quarterback and running back would be set up for failure if they had to play behind this same patchwork offensive line apparently never crossed Vinny’s mind. He sees a guy like Notre Dame’s Jimmy Clausen or Texas QB Colt McCoy running high-powered offenses in college and immediately envisions them replicating the success in burgundy and gold. Logic and offensive line be damned.

Our stance on Cerrato has been slightly different than other ‘Skins fans. We look at young guys like Devin Thomas, Fred Davis, Malcolm Kelly, Brian Orakpo, Chris Horton, Justin Tryon and see talented players who become solid contributors once they’re given the opportunity. Cerrato might not be focusing on every need the team has, but the players he does ultimately select do have value.

We thought that if Snyder refused to get rid of Cerrato, who is a personal friend of the owner, then maybe the next best thing would be to bring in someone to work over Vinny. Let him continue to evaluate talent, but let someone else have final say on which names to write on the draft card.

All that is moot now because Cerrato is gone and, as we first said on Twitter earlier today, the Redskins have apparently turned their attention to Bruce Allen.

Those familiar with Allen, who served as general manager for the Tampa Bay Buccaneers and as a senior executive with the Oakland Raiders from 1996 to 2003, say he’s very good with number crunching and the salary cap, but that he’s never been considered a great talent evaluator.

“Bruce Allen is the personification of an NFL winner,” Snyder said in a statement. “Our fans know his heritage; we know his abilities. He is the right person to lead our club.”

Obviously, Allen was excited. But that’s probably because he just got paid big money to take over this ‘fixer-upper.’

“This is an extraordinary opportunity with one of the world’s most successful sports franchises,” said Allen. “I love everything about this assignment; I know what it means to be dedicated to the Redskins. I can’t wait to get to work.”

With Allen now on board, obviously changes can be expected across the board.

Jon Gruden, who coached under Allen in Tampa Bay, will obviously be mentioned as a possible head coaching candidate, although his extension he signed last month basically makes it impossible to get out of his Monday Night Football contract with ESPN unless Snyder throws a ridiculous amount of cash their way.

Mike Shanahan was rumored to want more power than is afforded a typical head coach, so maybe that can work with him looking at players and Allen working on the numbers. Of course, Shanahan did draft Maurice Clarett, so maybe he’s not the best qualified talent evaluator either.

The bottom line is, for the first time in recent memory; fans of the Washington Redskins truly have reason for hope and optimism. Sure, you might want to proceed with “Cautious Optimism,” but we’ve now reached a point that many of us thought we’d never see – Cerrato is no longer in the equation. No more wasted draft picks. No more ill-advised free agent signings. No more ‘buddy-buddy’ routine with the owner.

What happens next is anyone’s guess. But the fact that it’s finally going to be a change from the norm, is a welcome reality.