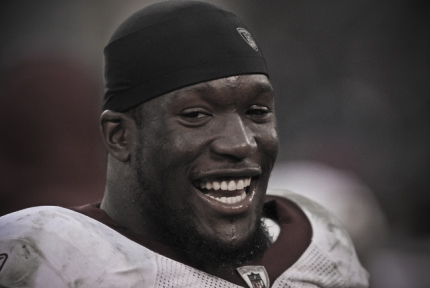 On a dreary, rain-soaked day in front of a half-empty stadium halfway across the country, the Washington Redskins finally lived up to expectations for the first time since Jim Zorn took over as head coach two seasons ago, beating down the Oakland Raiders 34-13.

The Redskins took on a tougher-than-you-might-think Raiders team that, although they only have four wins, they’ve beaten Philadelphia, Cincinnati and Pittsburgh this season. Also, it should be noted, that the ‘Skins have played down to the level of their opponent for much of the last two decades, which might explain how a doormat like the Raiders had beaten Washington in seven of their previous 10 match-ups coming into the game.

Despite playing without pretty much every “big-name” player on the roster, the Redskins put together a complete team effort in dismantling Oakland. The offense, led by quarterback Jason Campbell, started out each half by punting twice. On their other seven drives however, the ‘Skins offense put points on the board six times – scoring four touchdowns and two fieldgoals. The defense gave up 10 points in the first quarter, and then held the Raiders to a mere fieldgoal the rest of the game. And for the fourth-consecutive game, the Redskins went into a fourth quarter with the lead – this time up 17-13 heading into the final frame.

But unlike the previous three games that ended in defeat, this time around the Redskins stepped up their game on both sides of the ball and preserved the win. The offensive playcalling in the fourth quarter, for a change, didn’t go conservative. The players responded by adding 17 points. The defensive players got to do what they love most – put their hand in the dirt and rush the passer. The Raiders were simply no match for their aggressive and suffocating attack and wilted under the pressure. And the Redskins earned their first road win of 2009, even if it took them seven games to do it.

Through the first 13 weeks, the Raiders had yet to allow a tight end to score a touchdown against them. In fact, this was a point of pride in Oakland that players and fans alike could hang their hat on. Well, that was before Fred Davis came to town. The second-year pro only had three catches on the day, but made the most of them – scoring two touchdowns and racking up 50 yards. After the game, Davis admitted he knew they hadn’t allowed a touchdown to a tight end in 2009. He also said that when a team goes man-to-man against the Redskins in the red zone, he feels he’s going to score any time the ball is thrown his way.

Davis wasn’t being cocky, he’s simply playing with confidence after taking over for an injured Chris Cooley halfway through the season. On the year, Davis now has 35 catches for 369 yards and a team-high five touchdowns, with the bulk of the production coming in the last seven games. Davis said after the game that this game felt like his good old days back at USC, where the offense marched up and down the field and put points on the board, and the defense took care of the rest. What’s clear is that Davis is now playing like a Mackey Award-winning tight end. He catches passes in traffic. He’s the go-to option in the red zone. He is nearly impossible to bring down with just one defender.

Davis’ production is helping the rest of the offense as well. In an up-and-down season, Campbell has quietly finished three of the last five games with a QB rating of over 100. In those three games, Davis has 12 catches for 153 yards and three touchdowns. You can basically pencil him in for four catches for 50 yards and a score. Once he gets going in the first half, opposing defenses have to alter their attack and focus more on Davis, which in turn frees up Devin Thomas, Santana Moss and the ground game to get involved. Davis basically jump starts the offense and then the rest of the offense comes along. And he’s doing it so well that the Redskins put up 30 points in back to back games for the first time since 2006. This from a guy who earned the nickname “Sleepy” because he overslept on his first day as a professional athlete.

Speaking of the ground game, the Redskins came into this match-up with a virtual unknown as their starting running back. Quinton Ganther, who has been a member of the franchise for all of a month, was named the starter last week and responded with 93 yards of total offense and two touchdowns. In the first quarter, with Washington struggling to get going offensively, Ganther caught an innocent screen pass and showed what he’s capable of, making several defenders miss and picking up 42 yards with a burst of speed many ‘Skins fans didn’t know he had.

After the game, Ganther said this was a day he’ll never forget. That’s probably because the Richmond, California native scored the first two touchdowns of his career in front of roughly 250 friends and family members. A guy who was simply looking for a job a month ago was suddenly sealing a win with a pair of second half touchdowns in front of his loved ones on Sunday.

“Opportunities in this league are so hard to come by,” Ganther said after the game. “And when they do come, you have to be ready.”

So yeah, it’s safe to say this game was a dream come true for the 25-year-old.

Enough about the offense.

The Raiders came into this game having won two of their last three games, thanks to switching to Bruce Gradkowski as their starter. It’s not like Gradkowski has been great since taking over for JaMarcus Russell. He’s simply been less shitty.

In the early stages of this contest, the Redskins and Raiders seemed fairly evenly matched. And then Gradkowski got hurt and Russell, the former number-one overall pick, was forced back into action. ‘Skins defenders smelled blood in the water and the onslaught was on. Safety LaRon Landry, who was targeted early and often by Gradkowski, stepped up his game with Russell (his former teammate at LSU) involved.

Landry finished with a forced fumble and an interception. Defensive end Andre Carter had two sacks, which is noteworthy because the guy only had four all last season. But the man of the hour was rookie Brian Orakpo, who tied the team record with four sacks on the day. After bringing down Gradkowski once, Orakpo switched to another level against Russell and seemingly spent the rest of the afternoon in the backfield.

Russell, who might be the biggest bust in NFL history, never had a chance. He was 10 of 16 passes for 74 yards and an interception, while being sacked six times for 52 yards.

In fact, the eight sacks by Washington was the most they’ve had in a game since 1990. The team record is 10. According to Hall of Famer Sonny Jurgensen, had JaMarcus Russell played the entire game, the Redskins would have had at least 15 sacks. Not to pile on, but one of the defensive players even referred to Russell as “The Statue of Liberty” because he’s so big, he’s basically incapable of evading any kind of pass rush.

With 11 sacks through 13 games, Orakpo is now tied with Carter for fourth place in the NFL. His four-sack effort against Oakland represented the best outing of his entire life. He told media members after the game that he’d never had four sacks in a game at any level, including high school and college. On a day without Albert Haynesworth in the lineup, Orakpo and Carter picked up six sacks.

Some might say they were stealing candy from a baby, but this came from a duo who supposedly cannot get to a quarterback without the $100-million defensive tackle taking up multiple blockers. Not bad for a rookie defensive end pretending to be a linebacker and a 30-something playing out of his natural position on passing downs.

With a bunch of nobodies, the Redskins continue to evolve into a legitimate franchise. Guys like Clinton Portis, Chris Samuels and Chris Cooley are out of action, and unheralded players such as Quinton Ganther, Levi Jones and Fred Davis step up. High-priced players like Albert Haynesworth and DeAngelo Hall are sidelined for multiple games, and whoever is next on the depth charts simply steps in and does their best. Jim Zorn gets stripped of playcalling duties, and a retiree shows this town what this offense is truly capable of. The question is – what happens next?

What happens when the stars are back in the lineup? Are the current guys performing at a higher level in place of the “name” players or because they’re not around? Has Jason Campbell shown he deserves to be brought back after a month of above average outings? Is it humanly possible for Jim Zorn to survive this disappointing season now that the team is actually competitive week in and week out? Or will the front office run the risk of blowing it all up and starting over because a “name” like Mike Shanahan is simply too big to resist?

No one is saying Zorn or Campbell or anyone else HAS to be brought back. After all, a four-win season is never acceptable. But the question that should be asked is – are the pieces finally coming into place for this team? And if you keep everything together, is this team capable of being a consistent winner? A month ago frustrated ‘Skins fans might have decked you for even dreaming such a silly scenario. Now, it’s a question worth considering as this team closes out the final three games.