offense thrives, defense … not so much 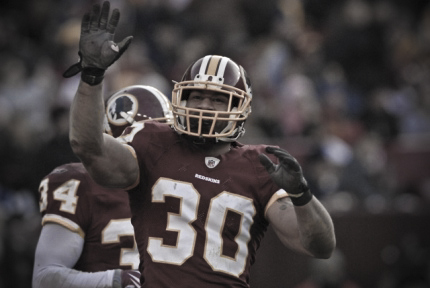 When it comes to the 2009 Washington Redskins, we’ve been operating under two truths – the offense stinks and the defense dominates.

During the first half of the season, when the Redskins faced four of the five worst teams in the league, the Washington offense was nearly nonexistent. Through the first six games, the Redskins averaged an anemic 13 points per game and were held without a touchdown against St. Louis and Kansas City (who are a combined 4-20).

Meanwhile, the Redskins still had a chance to wins these games because the defense was playing at such a high level. The Redskins’ defense, as usual, was ranked in the top 10 while allowing only 16 points per contest. As an added bonus, they also boasted the top-ranked passing defense.

But a funny thing has happened over the last three weeks – against playoff-caliber opponents in Dallas, Philadelphia and New Orleans, no less – the offense has started to come into its own, and now it’s the defense that is costing the team victories.

Redskins quarterback Jason Campbell, who half the fanbase simply cannot wait to run out of town, has completed 76 of 116 passes for 854 yards with five touchdowns and four interceptions and a QB rating of 87.3. He also ran for a touchdown against the Eagles.

Due to injuries to Clinton Portis and Ladell Betts, the Redskins have been forced to go running back by committee, so we’ll combine the production of Quinton Ganther and Rock Cartwright. Some quick math shows that the “Q-Rock” combo has 56 carries for 228 yards over the last three games, which is more than four yards per carry.

And most importantly, the offensive line, which was dreadful earlier this season seems to have finally found a rhythm. The run blocking has improved drastically, which is why lesser backs like Ganther and Cartwright have, at times, looked better than established guys like Portis and Betts. But the biggest surprise has been the team’s improved pass blocking. Over the last three games, Campbell has been sacked just twice. This from an offensive line that allowed Campbell to be sacked 28 times the first nine games.

So, over the last three weeks, the Redskins offense has scored an average of 20 points per game and racked up 1,082 total net yards (which equals 360 yards per game). That’s an improvement of a touchdown more per game and enough total yards to rank 10th, if they were able to maintain that pace over the course of the entire season.

It’s safe to say they’re getting it done these days.

If the defense resembled anything remotely close to a top 10 unit, the Redskins would be on a three-game winning streak, or at worst, 2-1 in their last three games. And yet, the Skins have lost three straight, by a combined seven points.

All three games share one maddening trait – with the game on the line, the Redskins defense simply could not get off the field.

Leading by six with roughly seven minutes left in Dallas, the Redskins defense allowed quarterback Tony Romo to heat up and drive down the field on a nine-play, 60-yard drive that took four minutes and 25 seconds. The Cowboys didn’t call a single running play on the drive and Romo lit up the Skins secondary, completing seven of eight passes for 66 yards (a false start call on the Cowboys explains the difference in yards).

One week later, the Redskins led the Eagles 24-16 with just under 12 minutes left in the game. Philadelphia took over at their own 10-yard line and promptly marched 90 yards in 10 plays to tie the game at 24-24. The Eagles got the ball back with 5:35 to play and put together a 10-play, 66-yard drive in under four minutes to steal the win.

In those two deciding drives, Eagles quarterback Donovan McNabb went five of eight for 115 yards and the Philly ground game picked up an additional 42 yards and a touchdown on 11 carries.

This past weekend was quite possibly the worst of the bunch. Yes, they were playing against the best offense in football against a Saints squad that scores 37 points per game. But to allow any opponent to drive 80 yards in 33 seconds in inexcusable. The fact that they did so in without any timeouts is downright embarrassing.

Saints quarterback Drew Brees completed four of five passes for 80 yards and a touchdown on the pivotal drive.

That means, with the game on the line, those three quarterbacks went a combined 16 of 21 for 261 yards and two touchdowns against a supposedly top-tier defense. Spin it any way you’d like and you still have to come to the same conclusion – the defense is nowhere near as good as their ninth-place ranking suggests.

The defensive line, which has been infinitely better at pressuring quarterbacks this season, cannot make a play in the clutch. Linebackers other than London Fletcher are nowhere to be found in the deciding moments and the secondary is flat-out failing to stop anyone.

Honestly, it’s so bad that we’re convinced if Carlos Rogers and LaRon Landry had us trapped in a dark alley, all we’d have to do is a double move and we’d get out of there free from harm. Both players are top 10 picks, and yet, neither seems to have any clue what to do if a receiver does more than one move on a route. Can someone at Redskins Park please chip in for the Sunday Ticket so these guys can watch what modern-day offenses are all about?

The moments in which either of these two guys actually makes a play are so few and far between that Landry, in particular, feels compelled to celebrate each time he does bring down an opposing player as if he’d just won the Super Bowl. It’s as if even he’s surprised he made the play.

Defensive coordinator Greg Blache would be wise to sit down his defense and go over the basics one more time. If you’re on the line, you simply have to do a better job of getting pressure in the backfield and if you’re in the secondary, there’s no excuse for letting your man get behind you in coverage. None of this is earth shattering. It’s Football 101.

But until these simple things start to happen, we might have to alter our two “truths.” Because these days, the Redskins’ offense is getting it done, while the defense continues to hold this team back.