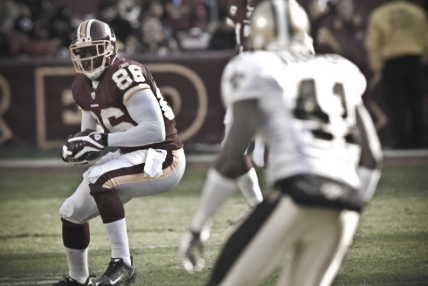 For three weeks now, the Washington Redskins have been good enough to win. And yet, for the third-consecutive week, we’re left searching for answers as another fourth-quarter lead vanished.

Had the Redskins knocked off the previously undefeated New Orleans Saints this past weekend, the post-game locker room would have been as festive as a kid’s first visit to Chuck E. Cheese’s. Unfortunately, the game unraveled in the end, the Redskins suffered a devastating 33-30 overtime loss and the locker room was about as enjoyable as a funeral parlor.

Searching for answers, we turned to tight end Fred Davis, who continues to be one of the few bright spots in an otherwise dismal season. What came next was quite possibly one of the most honest interviews we’ve ever been a part of.

That was a tough one, Fred. You guys just went toe-to-toe with the best team in the NFL and looked to be the better team all day long, and yet, here we are trying to figure out what went wrong. How should Redskins fans feel after this one?

“You probably feel robbed,” Davis said. “You should feel robbed, because that’s how I feel. I really feel like that game was supposed to be ours. Even past that bad call on the fumble – I thought the ball was dead – but I guess I’ve got to see it again. I think we should have finished them off when we could have. We had it. Again.

“We just didn’t finish,” he continued. “It’s on us. We should have scored another field goal or something. We should have made it. Every week it seems like something different – whether it’s the offense, the defense giving up a play at the end or special teams now. I don’t know … this really sucks.”

You’ve been involved in football most of your life. Have you ever been a part of something like this, where seemingly every week something unexpected happens and your team just cannot catch a break?

“I’ve never been a part of a situation like this and I hope I don’t ever have to again,” said Davis. “With everything that has happened, I really hope I don’t have to go through this again in the future. It needs to turn around somewhere. I know it is going to turn around; I just wanted it to turn around this week against this team. It would have been really great to have a win against a team like that.”

They shank a punt and somehow get the ball back because it bounces off of a Redskins player. A few plays later, they throw an interception and yet somehow score a touchdown on the play. Honestly, you couldn’t dream up a flukier way to have the game turn. How do you keep from becoming completely demoralized after this one?

“When I saw that happen I just thought ‘Okay, it’s football. Sometimes things like that happen,’” Davis said. “At the end of the day, I put it on us. As an offense, we have to score again. There’s gonna be a turnover. That stuff happens in a game. The other guys get paid too. There’s gonna be a play made against you or something bad happens that you don’t want. You’ve just got to come back out and make a play.

“I feel like we could have,” he continued. “We were ready. We wanted to. When we got down there, we played really conservative and tried to kick the field goal, and it didn’t work out.”

When the game first started, the Saints’ first two drives ended with punts. On the other hand, you guys were marching up and down the field, and you specifically were prominently involved. What does it say about the coaching staff’s trust in you to see the ball coming your way more and more?

“I feel like that’s how it was in the first half, but in the second half, we spread it out more and I like that,” Davis said. “I like when everybody’s involved and every receiver has a catch. It makes so many other people a threat to score. I feel like everything is on the right path.

“I feel like with Chris [Cooley], he’s one of the greats,” he continued. “I’m definitely not there yet, but I know I can make plays. Whatever plays they call for you, you’ve just got to make the best of it you can. That’s what I try to do, and I got lucky. I got into the endzone or was able to break a tackle. But all of that stuff doesn’t matter if you lose. I think of all of that as nothing now.”

We completely understand where you’re coming from, but at the same time, you, Devin Thomas and Malcolm Kelly were basically called a bust for more than a year. Now that you’re getting a chance, you’re all showing why this franchise invested in you …

“We knew that we could,” Davis said. “You know how the media is. We’re in D.C. If we’re not winning and we didn’t go to the playoffs last year, you’ve got to point the finger somewhere. I just think that’s how it is. This league is all about opportunities, and if you don’t get them, how are you going to show what you can do? If you’re only getting one or two plays, you might make one of them, but then again, you might mess up. It’s all about opportunity and what you do with it.”

With that in mind, we want you to talk good about Devin Thomas, who easily had his best day as a pro …

“Jason [Campbell] was putting the ball on point for him and he was making the catches that he needed to make,” he said. “That’s what he’s supposed to do. To me, I’m not surprised. He shouldn’t be either. That’s what we’re supposed to do. We’re supposed to get down field, catch the ball and make people miss. He’s that type of player, and I believe he can do it. So this game didn’t surprise me.”

While the strong showing by Thomas might not have surprised Davis, rest assured, the heartbreaking ending to the game sure did. Like we said earlier, this interview was one of those rare moments when a player forgets all the “athlete speak” and completely tells it how it is. Whether he’s talking about going conservative or simply saying “this sucks,” there’s no doubt what Davis was feeling in the painful moments after the Saints game.

We were already a fan of Davis before, but this only makes us like him that much more. In a league where, too often, players are only committed to the highest bidder, it was refreshing to see a young player who seemingly cares about the Redskins as much as the burgundy and gold faithful who’ve been tied to this team for generations.