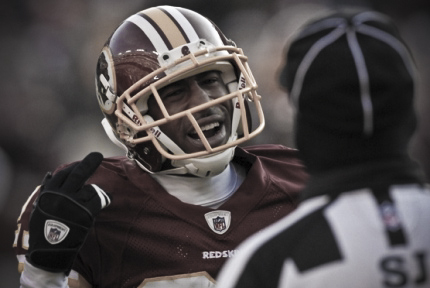 1. “No Surprise” by Doughtry

The fact that the Washington Redskins lost to the New Orleans Saints isn’t shocking. After all, they came into this matchup 3-8 while the Saints were 11-0 and the consensus top team in the NFL.

But it’s the way in which the Redskins lost this game – a 33-30 overtime thriller that makes this loss sting so much. Just one week after New Orleans made Tom Brady look downright average, Jason Campbell outplayed Drew Brees as he racked up a career-high 367 yards, three touchdowns and a QB rating of 111.9.

Read that last sentence again. Tom Brady, the league’s savior, was pulled to avoid further embarrassment and injury, while Jason Campbell, a guy his own team repeatedly tried to discard this past offseason, had one of the best games of his young career.

Folks might try to say “Well, this was a classic trap game.” Everyone knew the Saints wouldn’t be able to get fired up for a three-win Redskins team the same way they did for a primetime matchup with the Patriots, and we’ll agree with that statement to an extent. But Gregg Williams was on the other sideline and anyone familiar with his falling out with Daniel Snyder and Vinny Cerrato knows how much this game meant to him.

Williams truly believed in his heart that he would be the next head coach of the Washington Redskins once Joe Gibbs finished his second tenure with the team. But the front office had other plans – shunning Williams in favor of … well … anyone but Williams, and ultimately settling on Jim Zorn.

So yeah, the Saints, who boast the highest-scoring offense and defense in the NFL, were going to be ready – even against a lesser opponent like the Redskins. A few hours before kickoff it was announced that Redskins would be without cornerbacks DeAngelo Hall and Justin Tryon due to injury and suddenly an already-daunting task sounded insurmountable.

And yet, the Redskins came out looking like an elite team, while the Saints appeared to be the doormat.

The Saints got the ball first and had it for four plays before punting. Their second drive was a three-and-out. Meanwhile, the Redskins promptly marched down the field on a nine-play, 94-yard drive that ended with a Fred Davis touchdown to put the ‘Skins up 7-0. The Redskins’ second drive also went nine plays, as the team had no problem moving down the field once again and suddenly the Redskins were up 10-0.

Speaking of Davis, the second-year tight end out of USC has officially stepped into “The Cooley Zone.”

With Pro Bowler Chris Cooley on the injured reserve, Davis has become the central figure in the Redskins’ offense – hauling in 25 catches for 274 yards and three touchdowns. This from a guy who had just seven catches for 45 yards and no touchdowns the first six games of the season.

Much of the credit for the team’s fast start against the Saints goes to Davis, who caught tough passes in traffic and routinely fought for extra yards to keep drives alive. It’s no coincidence that the first play on three of the first four Redskins drives was a pass to Davis. The coaching staff clearly trusts the young tight end and Campbell obviously has faith in him.

Even though Davis had a strong showing against the Saints, his performance was completely overshadowed by Devin Thomas, who easily had the best showing of his 28-game NFL career.

These are the kinds of labels that have been unfairly placed on Thomas since the Redskins drafted him in the second round of the 2008 NFL draft. Thomas never complained. He simply let the mounting criticism build and used it as motivation. The former Michigan State Spartan truly believed as soon as he got his opportunity, he was going to make the most of it.

Well, Thomas picked a fine time to have his breakout game. Against an aggressive Saints defense, Thomas simply caught anything and everything thrown his way. Campbell targeted Thomas seven times, who responded with seven catches for 100 yards and two touchdowns. This from a guy who set his previous high in catches and yards a week earlier when he had four catches for 46 yards.

The only time Thomas didn’t catch a pass thrown his way was when he got mugged by Saints defensive back Michael Jenkins, who was flagged for a 32-yard pass interference call. Everyone knew there would be offensive fireworks when the Saints came marching in to FedEx Field, but very few could have guessed that Devin Thomas would be the one to steal the show.

Campbell had the best passing day of his career. Same for Thomas in the receiving game. And yet, the Redskins lost a game they never trailed until the Saints stole the victory in overtime. So what the hell happened?

Trailing 17-10 in the second quarter, New Orleans punter Morstead shanked a 27 yarder that should have given the Redskins one more chance to pad their lead before halftime. Only the punt took a crazy bounce off of rookie Kevin Barnes and the Saints recovered the ball.

Six plays later, safety Kareem Moore intercepts a Brees pass that was intended for tight end Jeremy Shockey. During the return, Saints wide out Robert Meachem made the play of his life, stripped Moore from behind. The ball popped out, Meachem plucked it out of the air and raced down the sideline for a backbreaking 44-yard score to tie the game at 17-17 at the half. Those two plays, more than anything else, decided this game.

Folks around town will blame kicker Shaun Suisham, who missed a gimme 23-yard fieldgoal. They’ll also point the finger at Campbell, who threw an interception late in the fourth quarter and fullback Mike Sellers, who fumbled the ball in overtime. But those two fluky plays, more than anything, woke up the Saints and helped them to remain undefeated.

Earlier this season, everyone rightly blamed Campbell and the Redskins offense when they forgot how to score points. You go three separate games without scoring a touchdown and that’s gonna happen. Well, it’s officially time to let the offense off the hook, because they finally resemble a legitimate offense.

These days the offense is playing well enough to win games and it’s the Redskins defense that is costing this franchise victories. Campbell went toe-to-toe with Drew Brees. Davis and Thomas caught anything and everything thrown their way. On the day, nine different Redskins players caught a pass. But none of it mattered because, for the third week in a row, the defense was incapable of making a stop with the game on the line.

With no time outs, The Saints put together an 80-yard drive in just 33 seconds to tie the game and force overtime. During this drive, Brees picked on defensive backs Carlos Rogers, Fred Smoot and LaRon Landry. We’re not talking about youngsters like Barnes or Moore who have been asked to step up because of injuries. No, we’re talking about veterans who have been around and know what it takes to win.

Just like the game in Dallas two weeks ago and again last week in Philadelphia, the defense failed to get the job done against an opponent on the ropes. Everyone around town believe the offense is inept while the defense is among the NFL’s elite, but that’s simply not the case. The offense is better than anyone gives it credit for and the defense is overrated.

“We have to finish the football game,” said linebacker London Fletcher. “We have to close out the game. We did a lot of things to put ourselves in position to win that game, and we came up short.”

Simply put – until this defense can close out an opponent, brace yourself for more heartbreak.