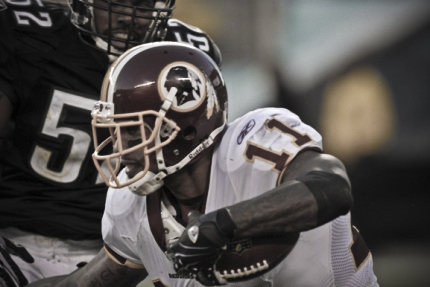 Has there ever been a player more afraid of contact than Antwaan Randle El?

Seriously, this is all we can think of every time we see him wave for yet another fair catch or dive to the ground as a defender closes in to avoid actually coming into contact with another human being.

Randle El is supposed to be this great slot receiver, but he’s not even remotely interested in going anywhere near high-traffic areas or fighting for yards after a catch. He simply catches a short pass and as soon as a defender is near, he hits the ground. If this somehow makes him a great anything, then clearly we have a different understanding of the word.

Now, compare that to the recent efforts of second-year receiver Devin Thomas. Against the Denver Broncos a few weeks ago, Thomas caught a Jason Campbell pass and used his speed, plus a series of stutter steps and spin moves to turn a routine route into a highlight-worthy 27-yard gain. Thomas created a little space between himself and the defenders and busted out the kind of play usually reserved for Madden ’10.

The following week, Thomas raced down the right sideline and hauled in a timely 26-yard catch against the Dallas Cowboys. This past weekend, Thomas reeled off the longest play of his young NFL career – a 35-yarder on third-and-seven that kept a third-quarter drive alive.

Three plays later, tight end Fred Davis scored his second touchdown of the season and the Redskins’ offense had three touchdowns in a game for the second time in three weeks.

Thomas’ statistics for the year – 16 catches for 187 yards and one touchdown – aren’t spectacular, but they don’t tell the whole story. In the last three weeks, Thomas has nine catches for 116 yards (as opposed to seven catches for 71 yards in the first eight games). He’s been targeted 17 times during this three-game span, which shows he’s earned Campbell’s trust as he continues to become more and more involved in the offense.

Regular readers know our stance on Thomas and the rest of the young receivers – the coaching staff’s primary objective for the remainder of the season should be to get the ball in their hands as much as humanly possible. Get them as many reps as possible to build their confidence, and we’re confident they will each prove to be competent and reliable NFL receivers.

In what is becoming a weekly event, we caught up with Thomas, Davis and Malcolm Kelly following the Eagles game to talk about their continued improvement.

All season long, we’ve been telling anyone who will listen that if the coaches give you guys a chance, you won’t disappoint. After another strong performance, can we finally say ‘I told you so?’”

(Laughs). “Ya’ll can say that,” Thomas said. “I ain’t gonna say that, but you can. It feels good, man. I’m finally getting the opportunities I’ve been wishing for since we got drafted and really feel like things are starting to come along. Enough of the ‘he said, she said’ stuff about the playbook or so-called immaturity or whatever. Just give us the ball and we’re gonna make plays. It’s already starting to happen.”

Last week we broke down the numbers and compared the number of plays guys like you, Davis and Kelly are on the field for compared to the Eagles young receivers. People see their production and wonder why you guys are putting up equal numbers, but all of their guys are on the field way more often than any of you. It sounds simple, but you guys can’t make plays if you’re not on the field, right?

“That’s definitely one aspect of it,” he said. “And then there’s stuff like the scheme, who they want to get the ball to and how much time the quarterback has. It all adds up. That’s why, when you start seeing things clicking, it’s because everybody is on the same page.”

Fair enough, but what kind of thoughts go through your head when you see those guys getting so many chances to make plays?

“You can see they’re all on the same page with the quarterback and are involved in the flow of the offense,” Thomas said. “Yeah, you kind of pucker up and wish that the situation was like that for you, but you’re not in that same boat. You take it for what it’s worth and take what you can get.”

Another way you’re getting more involved is that you’ve become the primary kick returner. How did you do back there?

“Overall, I feel I did pretty good,” he said. “I fought for some extra yards here and there. It was a little tough towards the end because they were bearing down pretty good after the momentum swing, but I’m gonna continue to try and do my thing and do my best back there.”

Fred Davis, we’ve been saying all year long that good things will happen if this team finds ways to get you guys involved. It’s safe to say that the Eagles game was another indication that you guys are ready to take on more, right?

You scored your second touchdown of the season. Can you walk us through the play?

“It was supposed to be a play where I get the ball,” he said. “The guy had me covered a little bit and I saw [Campbell] scrambling a little bit, so I found a little hole in the defense and just stood there.”

We’ve seen signs of life from the Redskins offense over the last few games. Would you say consistency is the biggest area this team needs to improve upon?

“Yeah, when we have field position, we have to take advantage of it,” he said. “We need to be getting fieldgoals or something every time. We have to do something. we’re capable of doing it. We just need to go out there and make it happen.”

If you look at the Redskins and the Eagles, both teams have quarterbacks who have dealt with controversies. Both have big-name running backs sidelined with concussions and a stable of young receivers. So why are they 7-4 and you guys are 3-8?

“That’s a tough question, Fred,” said fullback Mike Sellers, who was nearby.

“Yeah, that’s a tough question,” Davis said. “I think the difference thus far this season is that the Eagles probably haven’t been as injured as we’ve been. I think we have to do a better job of stepping up and making the big plays. [Eagles receiver Jeremy] Maclin is a young receiver, but he stepped up this game and it made a difference for them to get a win.

“The second half of the season we’ve been playing better because we’re used to each other now,” he continued. “We just have to continue to take advantage of our opportunities. It looks like we’re getting better, but there’s still room to improve. ”

Malcolm Kelly, you had a nice catch and run against the Eagles. How you feeling these days?

“My catch was alright, but we still lost,” he said. “I thought we put up enough points to win the game, but we still need to put up more points and we couldn’t do that. A lot of times we’re getting real good field position off penalties. Devin getting a real good return, getting us to midfield almost and we can’t turn it into points or if we did we just turn it into field goals. We’ve got to work on it.”

To us it looks like you, Thomas and Davis are becoming more involved and more consistent. What say you?

“I think if we keep getting consistent opportunities to make plays, then we’ll be consistent players,” Kelly said. “That’s what it’s all about. Nobody would have ever saw what Fred could do. I hate that it came at the point where it had to be Chris Cooley going down. Chris Cooley is a Pro Bowl player, so when were you going to see Fred Davis out there getting as many opportunities as he is getting? Now that he’s getting the opportunities, look what he’s doing. So I mean you’ve got to look at it all around the board. Now they are trying to put guys in positions to make plays and we’re trying to make plays. We can still do a little bit better.”

Against the Eagles, Kelly caught both passes thrown his way for 50 yards. Thomas finished the game with four catches for 45 yards and Davis had four catches for 43 yards and the touchdown. That means 138 out of Campbell’s 231 passing yards came from the young guns, who were the team’s top three producers in Philly.

The tide finally seems to be turning in their favor. Each had a catch of at least 25 yards against the Eagles. Each was able to make a catch, elude a defender and pick up extra yardage. Each player is seeing passes come his way with more regularity. And really, why shouldn’t they?

They’re young, they’re hungry and they’re eager to prove that they can handle whatever responsibilities they’re given. If the ball comes their way, you can bet none of the three of them are going to dive to the ground in hopes of avoiding contact. They’ve been waiting for two years for the chance to show this town that they’re legitimate NFL players, and now that they’re getting the chance – they’re not going to let it pass without a fight.