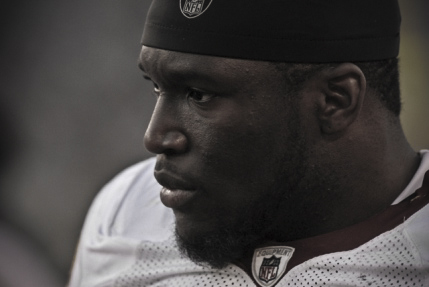 The three highest-paid players on the 2009 Washington Redskins are defensive tackle Albert Haynesworth, running back Clinton Portis and cornerback DeAngelo Hall. In related news, the Redskins were without the services of Haynesworth, Portis and Hall because of various injuries.

With that in mind, it shouldn’t really come as a surprise that the Redskins lost to the Philadelphia Eagles at Lincoln Financial Stadium, 27-24.

After all, they’ve lost eight of 11 games this season and 14 of their last 19 games overall. Add in a nine-game losing streak on the road and falling to a talented divisional rival in their hostile stadium was to be expected.

These guys aren’t just blue collar – they’re happy to be collecting paychecks. They don’t have egos. They don’t walk around like they’re better than anyone else. They might not possess the natural talent that bigger names have, but they’re committed to doing anything and everything they can to help their team. Most importantly, they play each snap as if it might be their last, which is exactly the type of attitude coaches love.

2. “Description of a Fool” by A Tribe Called Quest

The Eagles, more than any other team in football, give the Redskins fits. They have an aggressive defense that constantly applies pressure in a variety of different ways and an offense that isn’t afraid to take shots downfield or dial up trick plays when opponents least expect it.

Basically, when everything is clicking for Philly, they’re going to roll over the Redskins – which is clearly illustrated by the fact that they’ve swept the season series against Washington five of the last eight seasons. But it’s difficult to imagine just how lethal the Eagles could be if Reid didn’t continually find ways to get in his own way.

Think back to the Eagles’ 27-17 win at FedEx Field in Week 7. The Eagles basically won the game two minutes in when DeSean Jackson scored on a 67-yard run. All they had to do was continue to run their standard offense and the game would have been a blowout. Instead, for reasons that are unclear, Reid convinces himself that he has to run the Wildcat. So he kept throwing a rusty Mike Vick in at quarterback and was surprised when his offense stalled.

Fast forward to this week. The Eagles win the coin toss. They elect to defer, which essentially means they chose to kick off to the Redskins. And then they go for an onside kick, which fails miserably and gives the ‘Skins the ball on the 19-yard line. It’s as if Reid decided going into the game that he didn’t want the ball and then changed his mind at the last minute.

So instead of kicking the ball off to a 3-7 team who has been held without a touchdown three times this season, Reid got cute. The onside kick attempt fired up the Redskins and for the rest of the afternoon the Eagles were in a knock-down, drag-out brawl against an inferior team.

Late in the first half, the Redskins led the game 14-10. Quarterback Jason Campbell joined punter Hunter Smith as the only Redskins player to run for and throw a touchdown pass this season, and a dangerous Eagles offense was struggling to get things going.

Unfortunately, a pair of Campbell interceptions, both by cornerback Asante Samuel, provided the wake-up call Philadelphia needed and the Eagles went into halftime up 16-14. It’s always a futile effort to second guess the playcalling the day after a loss, but we found it surprising that the Redskins went back to the passing game after the Eagles kicked a fieldgoal with 49 seconds left in the half to pull within one, at 14-13.

Had the ‘Skins been content to play it safe and simply run out the clock, they go into halftime with momentum still in their favor. But Campbell dropped back again and Samuel picked him off again. David Akers kicked another fieldgoal and the Eagles were back in business.

In the fourth quarter, linebacker Chris Wilson hit Eagles quarterback Donovan McNabb as he released the ball and his pass floated in the air for roughly six minutes (give or take). When it finally came down, Tryon had his first-career interception and the Redskins took over on the 23-yard line with a 21-16 lead.

In the first half, the team went aggressive when they probably shouldn’t have. Now, with a fourth-quarter lead, the ‘Skins inexplicably opted to go vanilla and seemingly played for the fieldgoal attempt, even though Philadelphia would still only need one score to tie the game.

It wasn’t an Andy Reid caliber blunder, but the coaching decisions on those two drives definitely factored into the final outcome.

Over the last few years, two Eagles players have had their way with the Redskins defense. First it was running back Brian Westbrook, who seemingly always saved his best for the Redskins. Recently, it’s been DeSean Jackson running circles around an otherwise-impressive Redskins defense.

Well, the Redskins have found an answer for those two playmakers, and his name is London Fletcher.

Back in October, Fletcher applied the “hit stick” on Westbrook and he’s been battling concussion symptoms ever since. On Sunday, Fletcher finally caught up with Jackson and delivered a punishing blow that knocked out Philly’s top offensive weapon out with … you guessed it … a concussion.

We’re not here to make light of head injuries or to kick a player when he’s down. We’re simply pointing out that in their last two matchups, Fletcher has K.O.ed the Eagles’ go-to players. The rest of the league can continue to overlook the magnificent play of Fletcher, but we’ve got a feeling that, if nothing else, the fine people of Philly will make sure they know where he is and what he’s doing at all times from here on out.

Last week, the Redskins outplayed a divisional rival on the road, only to fall apart in the fourth quarter and walk away with a painful loss. One week after the Dallas defeat, it was more of the same, as the ‘Skins couldn’t find a way to close out a game they had no business losing.

We fully understand that in both instances, the better team won. And yes, the Redskins are so crippled with injuries that they’re forced to field a team of no names. And we’ll even agree that, for the first time this year, the offense is finally showing signs of being competent. But that doesn’t mean anyone in the Redskins’ locker room is happy with the outcome.

“There really aren’t any moral victories out there,” said linebacker Brian Orakpo. “We’re just very disappointed that we didn’t close these last two games out. We had these games and just don’t know how to finish right now. We have played 90 percent good in these games, but it’s the remaining 10 percent that we’re failing ourselves.”

Nothing good comes out of winning the first 57 minutes of a football game. If the Redskins are going to return to respectability, they’re going to need to learn how to close out opponents. Moving forward, the Redskins coaches need to make smarter decisions and the players need to do a better job of executing when the game is on the line. It’s not fancy and it’s not glamorous. But it’s effective.