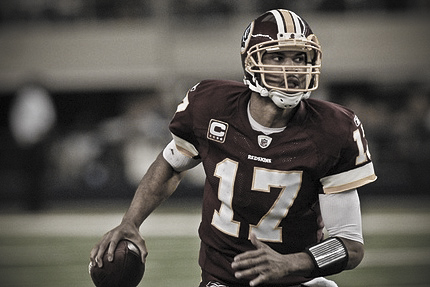 By now, everyone is familiar with the “Which came first, the chicken or the egg?” dilemma. Well, over the weekend, we participated in the Washington Redskins’ equivalent – “Who do we blame, Jason Campbell or the offensive line?”

Regular readers of this site know where we stand on the issue. We’ve always believed Campbell is good, but not great. He’s not the type of player who can throw an entire team on his back and single-handedly guide them to victory, but if he’s surrounded by the proper weapons, he’s good enough to get the job done.

Unfortunately, this year’s he’s stuck behind a below-average offensive line that’s been decimated with injuries and the entire offense has suffered because of it.

If the coaches dare to call any play involving more than a three-step drop, they run the risk of killing their quarterback. The Redskins offense takes a shot downfield once a game, not because there’s a chance they’ll complete it, but more so they can say they tried. For Redskins receivers to gain any significant amount of yards, they need to catch a quick pass, make a defender or two miss and then focus on gaining yards after the catch.

Our buddy, who we’ll refer to as “Bart,” refuses to buy into this line of thinking. He’s of the mindset that the Redskins offensive line would be perfectly fine, if not for injuries to tackle Chris Samuels and guard Randy Thomas. Concerning the team’s lack of depth on the offensive line, he challenged me to name any team in the NFL that has a great left tackle backing up a Pro Bowl left tackle. Bart is convinced the Skins had four starters locked in, if everyone remained healthy – even though Thomas hasn’t been healthy in three years and Samuels showed signs of breaking down last season. Bart was on a roll; logic be damned.

“Frankly, as often as Campbell may take a quick hit, he takes a late hit for not getting the ball out on time,” he said.

Bart finished up his argument saying, “Seriously, how long are we going to baby Campbell? He simply doesn’t throw the ball on any rhythm. He could make our line look great by throwing on time and limiting the rush.”

So, to recap, we’ve got Bart firmly convinced that the offense is stuck in neutral because Campbell simply doesn’t throw the ball on time. We’re of the mindset that Campbell does his Patrick Ramsey imitation because he knows that, more times than not, the guys called upon to protect him are going to fail. With neither of us willing to budge, we turned to a fair and impartial voice of reason – Hall of Fame quarterback Sonny Jurgensen.

“The Redskins could have Peyton Manning back there and it wouldn’t matter behind THAT offensive line,” Jurgensen said.

Bart tried his best to convince the Hall of Famer, but daddy wasn’t buying it. Mind you, Jurgensen is the same man who said the Redskins would have been 4-0 to start the year if they’d have gone with backup quarterback Todd Collins instead of Campbell. He’s by no means a blind homer or even a Campbell supporter. Jurgensen simply believes that the front office has neglected the offensive line for too long and the team is now paying the price.

We bring this debate up because we also learned some interesting news this past weekend. It seems owner Daniel Snyder has been a busy man these days. Two weeks ago, he was apparently on the sidelines of a Notre Dame practice, watching Fighting Irish quarterback Jimmy Clausen in action. This past weekend, while in Texas for the Cowboys game, Snyder personally attended the University of Texas’ thrashing of Kansas 51-20. Word is he was there to evaluate Heisman hopeful Colt McCoy.

Look, anyone familiar with the Redskins knows the chances of head coach Jim Zorn and/or Campbell being around next season is somewhere between slim and none. And we’re bracing ourselves for the inevitable – namely Vinny Cerrato surviving the shake-up and keeping his job as the team’s vice president for football operations. Smart money says if any of those three is likely to remain employed at Redskins Park, it’s Cerrato. Fine. If it plays out that way, we’ll live with it.

We know that no one involved in the Redskins’ decision-making process gives a damn about what we think. But Sonny Jergensen is a completely different story. He’s a Hall of Famer and is someone who the owner has a great deal of respect for. When Sonny talks, Snyder listens.

If the team is going to roll the dice and use their first-round pick on a young quarterback – whether it be Clausen, McCoy or any of the other big names out there – they better spend the rest of the offseason focusing on their offensive line.

Randy Thomas is done. In all likelihood, the same holds true for Chris Samuels. Tackle Stephon Heyer can help provide depth, but probably shouldn’t be a starter. Guard Derrick Dockery and center Casey Rabach are both respectable, but nothing more.

So use your first rounder on a quarterback and then spend every remaining pick on the offensive line. If you draft four or five big bodies, you increase the chances of filling the void. The team should also target offensive linemen via free agency or trade. Anything to upgrade the line. More importantly, anything to increase the chances that the next Redskins quarterback becomes the franchise cornerstone the team is sorely missing.