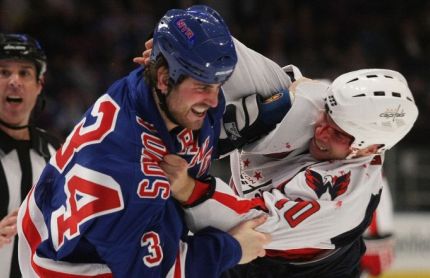 Although Alex Ovechkin only missed a handful of games, a lot has changed for the Washington Capitals while the superstar was sidelined for two weeks with an upper-body injury.

Too often, the Caps have been accused of being a one-dimensional team that goes only as far as Ovechkin, Nicklas Backstrom, Alexander Semin and Mike Green take them.

Well, 10 different Capitals scored a goal during the six games that Ovi was out of action, and suddenly, Washington appears to be a much deeper team than folks give them credit for.

With that in mind, it’s only fitting that the game-winning goal came not off the stick of Ovechkin, but from gritty forward Matt Bradley.

The game was tied 2-2 late in the third period, when the unheralded grinder stole the puck at center ice from defenseman Wade Redden, raced in on a breakaway and beat goaltender Henrik Lundqvist top shelf. Thanks to Bradley, the Capitals went on to defeat the New York Rangers 4-2, and Bruce Boudreau became the fourth fastest coach in NHL history to reach 100-career wins.

“Bradley was our MVP of the night,” said Capitals defenseman Brian Pothier.

Not all was perfect for the Caps, who fell behind 1-0 just 1:16 into the game on a goal by Rangers forward Marian Gaborik. This was not the kind of start that the Capitals were hoping for, especially considering they were 0-8-1 in their last nine visits to Madison Square Garden. And while the Rangers were only ahead by one, the ice seemed tilted for much of the first period as play largely remained in the Capitals’ defensive zone.

Sensing that his team needed a spark, Bradley decided to do something about it – dropping the gloves against Rangers tough guy Aaron Voros. Bradley fared about as well as you’d expect – he was bloodied and beaten to the point that he needed stitches – but the bout achieved his desired results and woke up his teammates.

“If you’re ever going to get into a fight at the time, I think that might’ve been one of them,” said Bradley. “It didn’t bother me. I could feel the blood coming, but there is no pain or anything. It’s just one of those things that’s more annoying than anything. You have to go in and get stitches and you have to miss five minutes.

Bradley’s fight had an immediate impact, as the Caps almost instantly picked up their play. Players skated harder. They dug in the corners to fight for loose pucks and played with an energy that was clearly lacking at the start of the game. And when they did, they were rewarded with key powerplay opportunities.

As has been the case of late, good things happened when the Capitals went on the powerplay, as Washington took the lead on goals by Ovechkin and forward Brooks Laich with the man advantage. In their last 10 games, the Caps have been lethal in these situations, scoring on 12 of 34 powerplay chances (a 35.3 percent success rate), even with Ovechkin out for six of those games.

The Capitals allowed the Rangers back into the game in the third period, when Gaborik scored his second goal of the game (and fourth against the Caps this season) with Pothier in the penalty box to tie things up at 2-2. That’s when Bradley answered the call once again; scoring his aforementioned breakaway goal to help steal a victory for the shorthanded Capitals on a night they were without the services of Semin and forward Mike Knuble.

“He was pretty good,” Boudreau said of Bradley. “That’s what he’s got. He’s got oodles of character.”

During the course of a long season, role players like Bradley are absolutely vital to a team’s sustained success. Superstars like Ovechkin can do a lot of the heavy lifting, but there are going to be nights when someone else has to step up and make a play.

Playing against a talented Rangers team in a building where the Capitals rarely enjoy success, Bradley did everything short of putting on the goalie pads to propel his team to victory. His teammates love him for it. Here’s hoping Caps fans realize how much the checking line forward means to this team.