getting defensive about redskins’ line 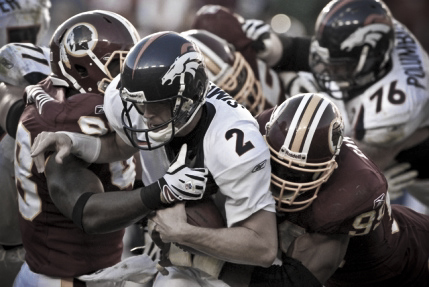 We can’t help but laugh when we see supposed experts babble on about how defensive tackle Albert Haynesworth has somehow underachieved since joining the Washington Redskins.

Simply put, any person taking this stance is either a.) trying to say something sensational in hopes of drawing attention to himself or 2.) completely clueless.

That’s because anyone who is actually familiar with the Redskins over the last several years knows that there are several constants with this team.

Regardless of what scheme the coaches choose to run, this offense is at its best when running the football. The defense routinely ranks in the top 10, but struggles to get sacks or create turnovers. The special teams are awful whenever Antwaan Randle El is prominently involved. Okay, that last point has nothing to do with this, but that doesn’t mean it isn’t true.

But back to the defense. Here’s a breakdown of the last five seasons:

In 2005, the Redskins defense, which ranked ninth overall, had 35 sacks on the year (tied for 20th in the NFL), and were led by defensive end Phillip Daniels with eight sacks. Linebacker Marcus Washington was second on the team with 7.5.

In 2006, the Redskins defense, which ranked 31st overall, had 19 sacks on the year (32nd in the NFL), and were led by defensive end Andre Carter with six sacks. Daniels was second on the team with three.

In 2007, the Redskins defense, which ranked eighth overall, had 33 sacks on the year (tied for 16th in the NFL), and were led by Carter with 10.5 sacks. Washington was second on the team with five.

In 2008, the Redskins defense, which ranked fourth overall, had 24 sacks on the year (tied for 28th in the NFL), and were led by Carter with four sacks. Defensive linemen Demetric Evans and Jason Taylor tied for second with 3.5.

Currently, the Redskins defense is ranked fifth overall and has 24 sacks through just nine games (tied for seventh in the NFL), led by Carter with eight sacks. Rookie linebacker Brian Orakpo is second on the team with seven.

Notice anything? Like the fact that the Redskins have already matched last season’s total of 24 sacks with seven games left on the schedule. That couldn’t be because of Fat Albert, could it?

People seem fixated on two things – the $41 million in guaranteed salary that the ‘Skins gave Haynesworth to come to D.C. and the percentage of plays Albert is in the game for (he’s second on the defensive line, behind only Carter). Okay, a third area folks pay attention to is the number of times per game Haynesworth is on the ground, apparently suffering from a catastrophic injury … or catching his breath. These things happen.

But here’s what we’re getting at – this defensive line is playing at a higher level than any other time in the last five seasons. Offenses have to double or triple team Haynesworth, which frees up guys like Carter and Orakpo to make plays. Look at the numbers:

Carter has registered seven sacks in the last five games. This from a guy who just one season ago had four sacks in 16 games. Orakpo is a rookie who has been forced to play out of his natural position because the team needs him to fill in for a thin linebacker unit.

That being said, Orakpo still has seven sacks this season, which is a new Redskins rookie record. Orakpo’s seven sacks are already the most in a season by any NFL rookie since 2006, when Chicago’s Mark Anderson registered 12.

In addition to his eight sacks, Carter also has 11 quarterback hits and 14 QB pressures this year. Orakpo has seven sacks, five hits and seven QB pressures. Throw in Haynesworth’s three sacks, eight hits and 10 QB pressures, and it’s readily apparent that Denver quarterback Chris Simms isn’t alone in looking like he’s running for his life against the Redskins’ new and improved defensive front.

“I’m just having fun,” Orakpo continued. “Everybody was playing with passion and enthusiasm, and it made everyone play well. Guys are really stepping up and making plays.”

With seven sacks in five games, we asked Carter if this is the best stretch of his career.

“Honestly, everything is a blur,” said Carter, who is tied for sixth in the NFL in sacks. “I just play hard. Maybe earlier in my career I’d think about that stuff, like ‘Okay, I’ve got to get there. I’ve got to make this play.’ But now, I just play hard for God, my family and the Redskins.”

We understand where you’re coming from, but at this point, we can put you down for a sack a game and know you’re going to get it …

(Laughs). “It’s just all about growth,” he said. “This is my ninth year. You’ve just got to turn it on and hope the football gods call your number. I’m just trying to make the best of this experience and whatever happens, happens.”

What about Orakpo? What have you seen from the rookie so far this year?

“Rak’s doing well,” Carter said. “Although, I have to tell him every time we get a half sack, he needs to stop taking my sacks. No … I’m very proud of him. He’s going to be a special player, and he’s coming along very well. He’ll be able to take over for me when I’m up and out of here. Hopefully, that’s not too soon.”

Even if you’re not a statistics junkie, there’s the eyeball test. Too often last year, quarterbacks had all the time in the world to make plays. This year … not so much.

“I made this comment before, and it’s hard to listen to, but last year I felt like we had some quarterbacks feel very comfortable in the pocket,” said head coach Jim Zorn. “This year we are making quarterbacks uncomfortable in the pocket. Now, you can see when a team has extended time [in the pocket] what they can do, even on that one overthrown deep pass, there was some extended time there that allowed him to see that throw. Now it was overthrown and we weren’t hurt by it, but we could’ve been severely hurt by it.

“The pressure we’re getting on the quarterback is creating the sense for the quarterback, ‘I’ve got to get rid of the ball sooner,’” Zorn continued. “We’ve created some inaccurate throws. We’ve seen this with ourselves, so we know what it does. I’m really proud of what our defense is doing this year, and I’m proud of those guys that are getting the sacks – there are some unsung heroes in that. I think the guys are working hard to get their sacks, but the team is working well.”

Zorn didn’t specifically mention Haynesworth, but then again, he didn’t need to. Anyone actually watching the Redskins week in and week out can see the impact the big man is having each and every Sunday. 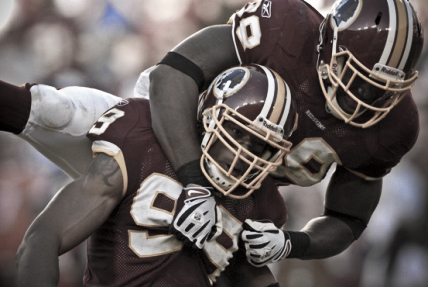