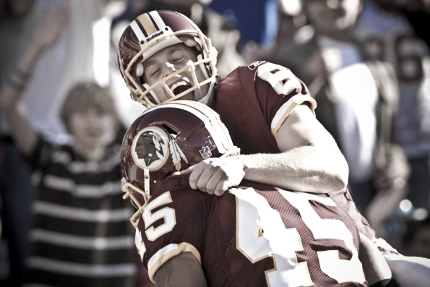 Morale was at an all-time low. Fans spoke of staging protests, walkouts and any other form of demonstration to show their disgust. Bench the quarterback. Fire the general manager. Hell, sell the team. This is what Washington Redskins football had become in 2009.

On the field, things were just as dire. The Redskins stood 2-6 at the midpoint of the season, and even in their rare victories, there was little cause for celebration. Beating two of the league’s doormats by a combined five points does little to soothe the situation.

So it goes without saying that the Redskins 27-17 victory over the Denver Broncos Sunday was just what the doctor ordered. Not only did the good guys get a win in a season in which they’ve been hard to come by, but they did so in a completely satisfying manner.

Beating the winless St. Louis Rams 9-7 with a woeful “offense” consisting of just three fieldgoals doesn’t cut it. Beating the 6-2 Broncos in a game in which you trailed three different times and broke the 17-point barrier for the first time all year … well … that’s a different story.

Think back to the Monday Night Football game against the Philadelphia Eagles last month. When Eagles receiver DeSean Jackson scored a 67-yard touchdown less than two minutes into the game, everyone in attendance pretty much knew the game was over.

Flash back to this week’s game and it was déjà vu all over again, as Denver wideout Brandon Marshall caught a 40-yard bomb just over two minutes into the game to give the Broncos the quick start that typically buries Washington.

“We’re not good enough to allow those kind of big plays,” defensive tackle Phillip Daniels said to us after the game.

Everything we’d seen up until this point backed Daniels up. And yet, the Redskins offense took over and promptly marched down the field with a 12-play, 78-yard touchdown drive. That drive said more about this team than anything else that’s happened this year. With every reason in the world to just give up, the Redskins “B Team” stepped up. They didn’t just put points on the board; they gave hope to a fanbase that was completely beaten down and in need of something, anything other than venom and negativity.

If that first-quarter score was the single most important moment of the 2009 season, then who was the bona fide playmaker who made it happen? “Touchdown” Todd Yoder, of course. For the second time in as many weeks, Yoder stepped up to help fill the void created when Pro Bowler Chris Cooley was sidelined with an ankle injury during the Eagles game. His stats might not do him justice – two catches for five yards and two touchdowns – but that doesn’t mean he’s not getting it done.

Yoder is now tied with Cooley and wide out Santana Moss for the team lead in receiving touchdowns on the year. And if that doesn’t impress you, consider this – Cooley finished the 2008 season with just one touchdown catch. In two games since Yoder went Mohawk, he’s got two touchdowns. The 31-year-old has been so clutch since he changed up his hairstyle, that other members of the organization would be wise to make the switch (if you get our drift, Vinny Cerrato).

3. “You Can Do Better Than Me” by Death Cab for Cutie

Hey, remember back during the offseason when the biggest story in town was the Jay Cutler sweepstakes? Having tired of the situation in Denver, Cutler cried until the team decided to trade him and the Redskins, like several other teams, immediately contacted the Broncos to inquire about the situation.

At the end of the day, the Chicago Bears “won” the right to have Cutler throw five interceptions a game while the Broncos brought in Kyle Orton and the Redskins were left with Jason Campbell and his bruised ego. So it was fitting that Campbell and Orton squared off in a game we jokingly referred to as the Bridesmaid’s Bowl.

Orton was forced out of the game at halftime with an ankle strain, but still ended up with solid numbers, completing 11 of 18 passes for 193 yards, two touchdowns and an impressive 134.7 QB rating. Campbell wasn’t too shabby himself, completed 17 of 26 passes for 193 yards, one touchdown and a 100.3 QB rating. Campbell also completed passes to nine different Redskins receivers.

Campbell and Orton weren’t the only two players throwing passes at FedEx Field Sunday. When Orton was injured, Denver backup Chris Simms (minus his spleen) was called into action. In related news, the game quickly took a turn for the worse for the Broncos with Orton sidelined.

Simms completed just three of his 13 attempts for 13 yards with an interception. And with no production from the quarterback position, Denver quickly fell apart, as illustrated by their 36 yards of total offense after halftime.

On the flip side, we have Hunter “The Punter” Smith, who you might remember from such films as “I rush for touchdowns for fun” back in Week 1. Well, Smith was called into action on a 53-yard fake fieldgoal attempt in the second quarter that should have failed on multiple levels, and yet, somehow worked.

For starters, the Redskins faced fourth down and 20. The odds of converting that play are slim. They’re even worse when you take the field with only 10 men, as the Redskins initially did. Once the coaches realized they were missing a player, the team was forced to burn a timeout. The problem was – just before the time out was called, the Redskins shifted out of field goal formation, with kicker Shaun Suisham going in motion and lining up as a receiver.

So really, the Redskins showed their hand to the Broncos and then dared to run the play anyway. And somehow the second time was a charm. Smith took the snap and immediately rolled right. Inexplicably, the Broncos were still completely caught off guard and Smith had all the time in the world to scan the field for any possible options to throw the ball to.

Finally, in what seemed like an eternity later, Hunter found fullback Mike Sellers, who was completely wide open down the left sideline. The Redskins scored the backbreaking touchdown and from that moment on, had all the moment in their favor.

So while fans can debate whether the Broncos were wise to choose Orton over Campbell, there is no debate that they’d have been better off with Smith instead of Simms, who finished the day with an embarrassing passer rating of 7.5.

Hunter “The Punter” went one for one for 35 yards, a touchdown and a perfect 158.3 QB rating, which means he beat Simms by a mere 150.8 in the QB rating department.

Question of the day: what would you have said if before the season we told you that two of your most productive offensive weapons would be Todd Yoder and Hunter Smith?

And you know what? We wouldn’t have blamed you.

As we were driving to the game, we couldn’t help but think of Bill Simmons, of ESPN.com fame. For years he’s touted something called the Ewing Theory, which is named after former New York Knicks center Patrick Ewing and claims that when a longtime superstar who has never won a championship leaves a team via injury, trade or free agency, and the media writes the team off, that team will actually play better.

With running back Clinton Portis out of action thanks to a concussion, coupled with an offensive line that has been routinely criticized all season long, we couldn’t help but think the Broncos game was the perfect opportunity for D.C. fans to see the Ewing Theory in action.

So the Redskins turned to running back Ladell Betts, who got his first start since 2006, and he responded with 114 rushing yards on 26 attempts, averaging 4.4 yards per carry and scored the game-winning touchdown. He wasn’t flashy. Instead Betts simply took the handoff and fought for as many yards as the Denver defense would allow him.

The Redskins finished the day with a season-high 388 total net yards. The team’s 174 rushing yards were also a season high, as well as the ‘Skins 35 minutes and 43 seconds in time of possession. Basically, Betts was everything the Redskins have lacked in the rushing game this season, and his effort helped fuel an offense that has been nonexistent for most of the season.

So now, the question becomes – what happens when Portis returns to the lineup? Do the Redskins stick with Betts or return to Portis?

Heading forward this is easily the most intriguing subplot in the second half of the Redskins’ season.