thanks to varlamov, caps outlast islanders 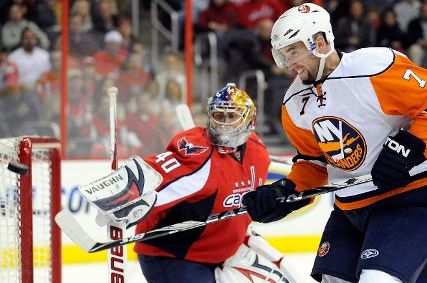 The Washington Capitals sure know how to put on a show. That much is clear after their 5-4 shootout win over the New York Islanders Wednesday night at the Verizon Center in a game that had it all.

Anyone familiar with these two teams knew this would be a tightly-contested game – especially considering the fact that five of the last six matchups have required overtime. But this epic encounter somehow managed to up the stakes.

There was no shortage of offense early, as evident by the combined five first-period goals, and yet, this game somehow needed an 11-round shootout to determine the winner.

Caps forward Alexander Semin tied the franchise record for the fastest goal to start a game (held by left wing Gaétan Duchesne), scoring just eight seconds in to put Washington ahead 1-0 before many fans had even taken their seats.

The Capitals have thrived in the first period all season long, scoring first in 15 of 18 games while outscoring opponents 20-6 coming into this game. So it came as a bit of a shock when the Islanders scored three goals on their first five shots, taking a stunning 3-1 lead before the game was even seven minutes old.

“I still have no idea what happened in the first five minutes,” said Caps forward Tomas Fleischmann. “We didn’t come out ready to play.”

Caps coach Bruce Boudreau had little choice at that point but to pull goalie Jose Theodore and insert Semyon Varlmov into action – even if the move caught Varly by surprise.

“It happened so fast, all I can remember is me looking at the coach and him saying ‘Go in,’” Varlamov said through an interpreter. “As I was going into the game, I didn’t even understand what was going on. I didn’t even have time to gather my thoughts.”

But in an effort fitting of Veteran’s Day, the Caps were able to battle back against the scrappy Islanders, scoring three straight goals to take a 4-3 lead in the second period.

“Even when we were down, I never thought that we were out of it,” Boudreau said. “It was too early. There were 50 minutes left in the game. We were down 3-1, but I thought we had a good chance of coming back.”

For the night, the Caps got two goals from Semin, as well as tallies from Fleischmann (who now has six goals in seven games this season) and Eric Fehr (who scored on the hockey equivalent of a no-look shot). Add in the shootout clincher by captain Chris Clark and the Caps have a three-game winning streak – even without forward Alex Ovechkin in the lineup.

Scoring aside, the Caps were only able to earn the victory because of a stellar performance by Varlamov, who stopped 25 of 26 shots in regulation and 10 of 11 shots in the shootout, on a night when Theodore was off his game.

“I don’t like to do that, especially so early,” said Boudreau of pulling Theodore, “He looked a little rattled and he looked a little down. It’s not like pulling him when the game is out of reach; we had so much time left. The last time he was pulled, Varly came in and shut the door, so I thought he could do it again.

“Theo has played so well for us,” he continued. “He had a rough outing and he’ll come back this week and play another game and he’ll be great for us.”

Varlamov, on the other hand, was lights out in relief on Theodore. And while he looked solid in net the entire evening, no save stands out more than his effort in the shootout against Islanders forward Trent Hunter.

Hunter came in at full speed and fired a shot low and hard, which Varlamov was able to trap between his pads. Things got dicey though, as Varlamov’s momentum nearly caused him to slide back into the net with the puck. In a moment of pure instinct, Varlmov grabbed the crossbar and somehow managed to keep himself and the puck from crossing the goal line.

“I was just skating back into the goal very fast,” he said. “I just grabbed the first thing I could to stop my movement into the net.”

It was a heads up play by the young netminder and one of the main reasons the Caps were able to walk away with two points on a night when they started about as poorly as possible.

This game illustrated why the Caps are currently atop the Eastern Conference standings.

They feel they have two number-one goalies, so when one is off his game, Boudreau has no problem turning to the backup. Semin, on nights when he feels like playing, can still score some of the prettiest goals imaginable. And without Ovechkin in the lineup, secondary scoring has not been an issue – with 10 different Capitals players registering a goal since Ovi was sidelined with an upper-body injury.

When the Caps avoid mind-numbing penalties and careless turnovers, they can play with anyone. And because they’re routinely involved in high-scoring affairs, thanks to their high-risk, high-reward style of play, they feel no pressure being down 3-1 so early. While every other local team struggles to achieve mediocrity, the Caps continue to put on the most entertaining games in town.