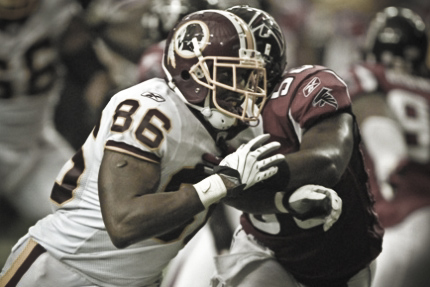 With tight end Chris Cooley out of the lineup, Washington Redskins coaches and fans get their first extended look at second-year player Fred Davis.

The next month or so will serve as an impromptu evaluation period to see what strengths and flaws Davis, who won the Mackey Award as the country’s top tight end his senior year at USC, has in his game at the pro level.

You never want to lose a player to injury, especially not Cooley, who was the team’s most consistent offensive performer at the time of his injury, but this trial period will finally begin to answer the question – is Davis a player you can build around?

In the last season and a half, opportunities have been few and far between for Davis, as well as fellow second-year pass catchers Devin Thomas and Malcolm Kelly. Throw in rookie wide out Marko Mitchell and you’ve got a quartet of potential playmakers.

But while young players like Miles Austin in Dallas, DeSean Jackson in Philadelphia and Steve Smith in New York all thrive this season for NFC East teams, no one can say with any certainty what will come of Davis, Thomas, Kelly and Mitchell.

At 2-6, the season is over for the Redskins. Sure, the schedule still says they play eight more games, but any realistic chance at the playoffs was crushed when offensive linemen Randy Thomas and Chris Samuels were put on the shelf.

So if this team is simply playing for pride the second half of the season, why not up the stakes? Why not throw all four of these young players into heavy rotation and give them a baptism by fire? What harm would it do to play “The Future Four” to see who can be counted on and who, out of the group, is a bust?

With that in mind, we set out to talk to the youngsters about the situation.

How tough is it mentally to go into a game having no clue how much or how little you’re actually going to play that week?

“It’s hard,” admitted Davis. “It’s definitely not easy. It’s one of those experiences that you just have to work through and make the best out of the situation. Some people it works out, some people it doesn’t. It’s all about getting that opportunity. You never know when your time will come, you’ve just got to be ready and do the best you can.”

As an outsider, you see Kelly getting the bulk of the snaps one week and then the next game he’s glued to the bench while Thomas gets all the snaps, and you wonder if it isn’t hurting both of them …

“Yeah, it’s hard,” Davis said. “Because you never know what’s going to happen. It catches you off-guard a little bit, kind of like when I went in [after Cooley’s injury] and gave up two sacks. You’ve just got to prepare the best you can. But for them, it’s definitely been hard.”

You never want to completely give up on a season, but wouldn’t this be the ideal time for the four of you to get in there and show everyone what you’ve got?

“I think it would be,” said Davis. “Marko looked good catching the ball. I thought I was going to get a few more touches [against Atlanta], but I didn’t. I mean, I was ready to make plays …”

Davis’ words trailed off, but his message was loud and clear. If the coaching staff calls his number, he feels he’s more than ready to step up. All he needs is that opportunity.

“When people are finally put in situations where they have a chance to make a play, they usually make the plays,” Kelly said.

“You’re right, man,” said Kelly. “It’s just kind of like, when you do get a chance, you’ve got to go out there full speed and make the best of it. It’s just one of those things. When things aren’t going well, people tend to over-examine everything. They think if this person can help on one play, we want him in, so they switch you in and out. It’s just kind of what you go through.”

With the team at 2-6 and the offense struggling to put points on the board, wouldn’t this be the ideal time to put you guys in and see what you’ve got? What’s the worst that can happen, the team continues to struggle scoring points?

“I don’t really have a definite answer to that question,” Kelly said. “But I think that the young guys have to get out there, so you can see if they can or they can’t, you know. Most of the time, when we’ve had time to get plays off, we usually make plays.”

Seeing both Thomas and Davis get their first NFL touchdown catches in the same game, against the Eagles two weeks ago, seemed to confirm this line of thinking.

“We just need opportunities, man,” Thomas said. “It’s tough when you only get one shot. Sometimes we might drop a ball or something because we’re so eager to make that play. But you’ve got to keep feeding us the ball.”

In that same Eagles game, we saw a guy like DeSean Jackson making plays in the passing game and on returns for Philly. Even if this team can’t find more than a handful of snaps in the passing game, you think they could try to use you to spark a struggling punt return unit, right?

Although he only played 12 snaps against the Falcons, Mitchell got his first real taste of NFL action this past weekend. We wondered how he’s feeling after the experience.

“Oh, I’m hungry,” he said. “Real hungry. I’m a competitor who tries to do anything I can to help my team win.”

It goes without saying that Mitchell, along with Davis, Thomas and Kelly, can only help this team win if they are given a chance. The time is now for ‘The Future Four.” They all know it. Hopefully, people calling the shots at Redskins Park are smart enough to see it too.