the freeing of marko 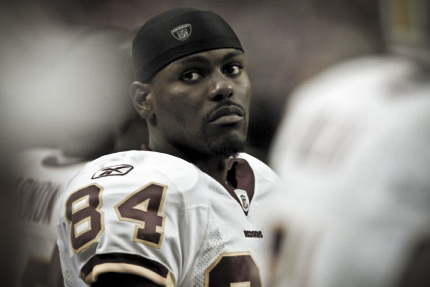 Since the season began, we’ve been standing on desktops yelling at anyone and everyone in our vicinity that the Washington Redskins should be utilizing rookie wide out Marko Mitchell.

(So much so, that we even created the “Free Marko” t-shirt in support of our cause).

Regardless of the fact that it came in the preseason against players who are no longer in the league, Mitchell made plays whenever he took to the field (he finished the preseason with 113 yards and three touchdowns).

After sitting helplessly while his teammates on the offensive side of the ball struggled to score points, Marko was finally called into action this past weekend against the Atlanta Falcons. So how did the rookie fare?

Say this about him – if nothing else, the man is consistent. Mitchell caught two passes in his first real NFL action. Both were in traffic. Both were for 11 yards and both gave the otherwise struggling Redskins offense a new set of downs. It might not be the type of production that makes national headlines, but it’s enough to catch the attention of his teammates.

“Marko had two great catches,” said quarterback Jason Campbell, who somehow had time to see Mitchell make a few plays in between beatings at the hands of the Falcons defense (or should we say, courtesy of the Redskins offensive line?) “He’s a big target, a big body. I’d say some guys are just gamers. He’s just one of those guys who’s just a gamer.”

Campbell wasn’t alone in praising the seventh-round pick out of Nevada.

“Two catches, both in traffic, he was solid,” said tight end Fred Davis. “That’s definitely what needed. We need to get first downs and he came up big with two of them. Marko is ready. He does it in practice every week. He’s just got to keep working hard and good things will happen.”

“He’s just doing what he’s been doing, man,” said Kelly, who routinely stays after practice with Mitchell and Campbell. “When people are finally put in situations where they have a chance to make a play, they usually make the plays. He’s a dude who has got real strong hands and they know he can catch the ball. So it’s nothing for him to come into the game and them to throw it to him.”

We heard that had tight end Todd Yoder not caught that touchdown pass in the second half, the next play was going to be a fade route in the corner of the endzone for Mitchell …

“Yeah, it was,” confirmed Kelly. “They just put a new package in there where me and him go out there. He’s on one side and I’m on the other. They’re starting to do a whole lot more of that, as far as gameplanning for us during the week.”

And with that, it was officially time to talk to the man of the hour.

Okay Marko, you promised us that once you made your way onto the field, you were going to make the most of it. Well, you had two catches for 22 yards and both moved the chains. Tell us about the plays.

“You know, they were both just your typical three-step drop slant routes,” Mitchell said. “My job is to catch the ball, and that’s what I did.”

How did it feel to finally see some action after sitting out most of the first half of the season?

“It felt good to have my first NFL catch and get on the stat sheet or whatever, but I think I would have felt more excited about it if we got the ‘W,’” he said.

Before the game you told us that you would primarily see the field in the redzone. We were looking for you out there, but didn’t see much of you. Were you standing next to the coaches in hopes they’d see you and send you out there?

“Yeah, for sure,” Mitchell said. “The play that Todd Yoder scored, the next play was going to be a redzone fade route. But he scored the touchdown, so it’s all good.”

Are you saying you want us to have some words with him?

Finally, we caught up with Yoder. We didn’t bring up the touchdown, for fear of slipping up and accidentally telling the mohawked one that he cost the rookie a chance at his first NFL touchdown. Instead, we simply asked him to evaluate Mitchell’s showing against Atlanta.

“Marko is a great player,” Yoder said. “Obviously in the preseason he did some good things for us, and I think he’s worked really hard in practice to keep improving his game. I think we’ve got a really talented young guy there, and I think as we push forward, you’re going to see more and more from Marko.

“The way this league is, you have to earn your way, earn your reps and kind of earn your respect,” Yoder continued. “This week, Marko obviously earned it. Next week, hopefully he’ll get rewarded for it.”