without ovechkin, caps no match for semin 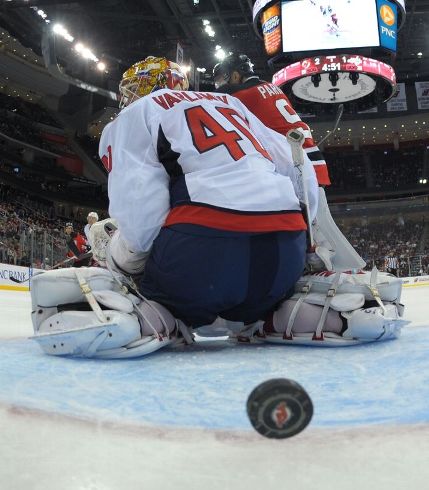 The Washington Capitals took the ice last night without superstar Alex Ovechkin and it went about as poorly as possible, as the Caps lost to the New Jersey Devils 3-2.

It’s one thing to lose to a streaking Devils team that features one of the league’s top offensive threats (forward Zach Parise) and one of the best goaltenders of our generation (Martin Broudeur). But it’s a lot less tolerable when your own players basically end up costing you the game. Just ask coach Bruce Boudreau, who was so red in the face by the end of the third period that he looked as if he’d chugged a bottle of Texas Pete hot sauce for fun.

“Not only did some of them not stand out, but they cost us the game,” Boudreau said of his team’s uninspired play. “It’s a tough one to swallow.”

Boudreau wasn’t done unloading on his players yet.

“Guys didn’t come to play,” he said. “Whether they are feeling sorry for themselves because Alex is not in, I don’t know. Same thing happened last year when we went into Buffalo and got smoked 5-0 when he wasn’t there.

“This isn’t a one-man team, but those guys have got to understand that. People can get hurt at any moment,” Boudreau said.

What on earth was Boudreau so fired up against? The same poor decision making and selfish penalties that have plagued this talented, but, at times, immature squad.

For example, the Capitals last three penalties in the third period all came in their offensive zone. Two of the three boneheaded penalties came from serial offender Alexander Semin, who added a second period slashing infraction in for good measure.

Devils winger Niclas Bergfors scored a powerplay goal just 19 seconds after Semin’s second penalty of the evening (a hooking call, for those scoring at home) and scored the game-winning powerplay goal less than a minute into forward Brendan Morrison’s hooking penalty.

The Caps were tied with New Jersey 1-1 heading into the final frame. Two dumb penalties later, the Capitals were basically forced to finish the game knowing that they’d cost themselves any real chance of victory.

For those looking for any possible positives to take away from this game, there were two on this otherwise disappointing evening. The first was the second-career goal by defenseman/temporarily converted forward Tyler Sloan, while the second is the continued hot play of forward Tomas Fleischmann, who beat Brodeur with a beautiful top-shelf goal in the final two minutes to give him points in three-straight games since returning from injury.

Before the Caps hit the road for New Jersey, we had the chance to chat with Sloan to see what it’s been like jumping from the blueline to wing.

“I’m having fun with it,” Sloan said. “It’s great. I obviously haven’t been able to get into the lineup defensively too much, so I’m happy to get in and contribute. I’ve played it before and I’m feeling a little more comfortable up there every game.”

We then compared Sloan to a utility infielder that Boudreau knows he can basically throw into any situation and get the 28-year-old’s best effort.

In happier times (i.e. – before last night’s self-inflicted loss), we then caught up with the Caps coach to get his take on Sloan.

“He’s done really good,” Boudreau said. “He takes direction really well, he can skate and he finished his checks. We’ve had him out there [at forward] and haven’t missed a beat. I’ve had him out there in the last 10 minutes in checking situations, and it’s because I have a lot of confidence in him.”

When informed that Sloan said he’d do anything to help the Caps win, even if it meant strapping on goalie pads, Boudreau couldn’t help but smile.

“You know what, that’s one of the reasons he’s here,” he said. “He’s such a great person and you can’t get enough of those guys who are willing to do whatever it takes to win. He’s one of them, and we’re fortunate to have him.”

Read that quote again. Guys who are willing to do whatever it takes to win. That quote, while directed at Sloan, says just as much about Semin as it does the Caps’ utility infielder.

While Sloan is more than happy to do anything Boudreau asks, Semin is seemingly always content to do whatever the hell he feels like doing – regardless of what his coaches have asked of him.

Stop with the freelancing. Don’t try to be too cute with the puck. If everyone else on the powerplay is in their respective positions, then maybe you should try it too. And most importantly, stop with the avoidable penalties.

Yes, he’s young and immature. But that only gets you so far when you’re making $5 million a year and are asking for a hefty raise when you become a free agent after this season.

Ovechkin is the league’s top goal scorer. Nicklas Backstrom is among the league’s elite setup men. Mike Green scores more than any other defenseman in the NHL. And then there’s Semin. The enigma who showed once again last night that he’s just as likely to lose a game for the Caps as he is to win one.

You can’t help but think that one of two things is going to have to happen for this team to achieve any of the lofty goals they’ve set out for themselves.

Either he’s going to have to buy into the program and become a team player or general manager George McPhee is going to have to make the tough decision to cut the cord on Semin and trade him to some other city, where he can become their problem. Only time will tell how this plays out.