playoff time for the caps 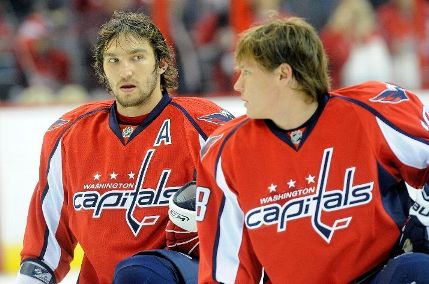 The Washington Capitals (a.k.a. – the one bright spot in town) are facing their toughest task of the season – finding a way to win without the best player in hockey.

Talented winger Alex Ovechkin, who led the NHL in goals (14), points (23) and shots (86) at the time of his injury, is out of the lineup with what the team is describing as an “upper-body strain” and is listed as week to week. Ovechkin was injured during the team’s 5-4 overtime loss to the Columbus Blue Jackets Sunday.

Moments later, Boudreau was informed that Ovechkin was already talking about the possibility of being back in the lineup by week’s end.

“It’s Ovi. He does things no one else can do,” he said. “I don’t know if it’s a viable option or not, but we’ll make sure he’s healthy when he plays. I just know that he’s very tolerant to pain. He wants to play so badly. Given those two equations, if anybody can be back sooner, it’s him.”

Since Ovechkin joined the league in 2005, the two-time NHL MVP has missed just two games due to injury. He’s not someone who is content to sit out and collect a free paycheck. If a game is going on, it’s safe to say he’s going to do anything and everything he can to be a part of it. So much so that he’s already told team reporters that he’s planning on making the trip to Florida this weekend, even if he can’t play.

“I want to be around team,” Ovechkin said. “I don’t want to stay at home and watch the game at home. I want to travel and I want to be a part of the team, too.”

While it’s great for Ovechkin to want to be with his teammates, realistically, Boudreau has to go into the next few games with the mindset that he’ll be without Ovi. And let’s not underestimate the challenge ahead for the Caps – proving that this team is capable of winning games without No. 8.

“As much as he gets all the press, I’ve gotta believe we’re not a one-man team and there’s still a lot of good players there,” Boudreau said.

While that is definitely true, Boudreau has done his best to put all his proverbial eggs in one basket. For most of the season, Ovechkin has been paired on the Caps’ top line with center Nicklas Backstrom and wing Alexander Semin.

In related news, the team’s success this season has largely depended on the output of that top line. When they’re on their game, few teams can match their production. When they’re off, goals are typically hard to come by for the Capitals.

No team could replace Ovechkin’s production over night. With him out of the lineup, the Caps would be wise to focus on playing smarter hockey at both end of the ice and shoring up their play on defense.

Not only that, but the team needs to avoid taking what Boudreau refers to as “lazy penalties.” They need to eliminate the freelancing and cutesy plays. They need to do a better job in their own zone and cut back on the number of breakaways goalies Jose Theodore and Semyon Varlamov must face each game.

Honestly, the team would be wise to enter the next few games as if it were the playoffs. Last season the Caps almost found themselves eliminated in the first round for the second-consecutive year because of sloppy, uninspired play against the New York Rangers.

But when they were down three games to one and their season was on the line, suddenly the Capitals transformed into the type of team that we all hope they can be. They took fewer chances. They played smarter on both ends of the ice. They didn’t try to make the highlight reel every time they passed the puck. In short, they played playoff hockey.

The Capitals are currently in second place in the Eastern Conference and hold a six-point lead in the Southeast Division. If they’d like to remain there, even without Ovechkin in the lineup, the Caps would be wise to stop playing like its November and start playing like its March.