time for davis to step up 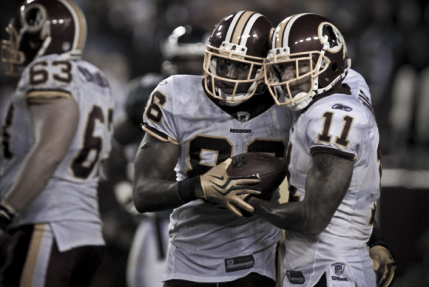 A season that started with cautious optimism has quickly turned into a nightmare for the Washington Redskins.

Not only has the team managed to lose to bottom dwellers like Detroit, Carolina and Kansas City, but they’ve also been devastated by injuries to key players, such as Pro Bowl left tackle Chris Samuels and, most recently, Pro Bowl tight end Chris Cooley.

Cooley, who has been the most consistent performer this season on an otherwise struggling offense, will be sidelined for at least a month after suffering a broken right ankle against the Philadelphia Eagles last week.

“He was probably our best offensive weapon,” said backup tight end Todd Yoder. “When you’re struggling offensively and you lose that guy, it’s going to be tough to replace him. We’re going to have to have guys step up.”

While Yoder didn’t mention him by name, it’s clear that Yoder was referring to second-year tight end Fred Davis. After Cooley was injured early in the second quarter, Davis played extensively, finishing with a career-high eight catches for 78 yards and his first NFL touchdown.

“I thought he played well,” Yoder said of Davis’ performance against the Eagles. “Obviously he’s got big shoes to fill.”

But all wasn’t perfect for Davis. While he was targeted early and often in the passing game, he did miss several blocking assignments and dropped a touchdown pass.

“Man, I had one hand on it and I’m thinking ‘I’ve got to catch this,’” he said. “But I took my eyes off it at the last minute. Luckily, I got a second chance.”

One play later, Redskins quarterback Jason Campbell went right back to Davis, who this time was able to secure the pass for his first touchdown catch.

“I was still thinking about that last one,” Davis admitted.

But was he excited to finally catch his first touchdown at the pro level?

“I was like, ‘Okay good. At least I got it,’” he said. “Those opportunities don’t come a lot in this league.”

With Cooley out of the lineup, we asked Davis what he has to do to step up and help fill the void.

“For me, I just want to do everything right,” Davis said. “The pass blocking, I gave up a sack. That’s definitely something I have to be ready for next game. I don’t have any excuses. The other thing they brought me in for was the catch passes and doing everything right. That should come naturally because that’s what they brought me in for. There can’t be any mistakes. All of us can’t be making the same mistakes all the time. Jason just hasn’t had time back there and stuff isn’t happening for us right now.

“Hopefully Chris will give me some tips and I’ll try to fill his shoes the best I can, but that’s a hard job,” Davis continued. “With him hurt, we lose a lot. People make gameplans around him. Without him, it creates an opportunity for me. I’m just going to have to put in a lot of hard work. He’s a Pro Bowler who has been doing this for a minute now. Without him, it’s definitely going to be different.”

It was easy to sense the frustration in Davis’ voice. While he understands the opportunity he has to show the team they made a wise move selecting him in the second round of the 2008 draft, losing wears on everyone.

“Yeah, it’s really frustrating,” he said. “I hate losing. I hate losing. And when I play a part in the losing … people might say, ‘Well, it was just one play and you had just been thrown in there.’ But I don’t like being the cause of any of it.”

That’s when you remember that Davis came from college football’s elite program – USC. That means he’s already lost more games this season than he did his entire college career. So this rocky start has been somewhat of a culture shock to him.

“Yeah, it is. This league, it’s definitely harder than it was at USC,” Davis said. “You really have to bring it every week.”

The Redskins have struggled to score points all season long. Add in a below average offensive line, the Cooley injury and a nonexistent running game, and it’s difficult to imagine things getting better anytime soon.

Campbell looks so shell shocked behind that suspect offensive line that’s he rarely looks downfield anymore, preferring check down and dump off passes to short-range targets in hopes of getting the ball out before the inevitable crushing blow is landed by opposing defenses.

For that reason alone, Davis really should be the one offensive player who looks forward to taking the field. If he gets in the right position and does what he’s asked by the coaching staff, this really can be a coming out party, of sorts.

The Redskins front office has been routinely criticized for selecting three pass catchers – Davis, Devin Thomas and Malcolm Kelly – in the second round of the 2008 draft. Fans question the decision-making process involved in picking three straight players who essentially do the same thing. But also, they see players from the same draft like DeSean Jackson in Philadelphia and Eddie Royal in Denver continually making plays, while the Redskins’ trio has yet to make their impact.

When the Redskins take the field in Atlanta this weekend, it would be great for everyone involved if Davis took the next step forward. Last week he showed a glimpse of his abilities, but after a season and a half, it’s time to make it happen.

If he’s ever going to be a consistent producer in this league, the time is now. Thankfully, Davis is fully aware of the situation. So the only question remaining is simply – will he be able to make the most out of this opportunity?