why you should love keith aucoin 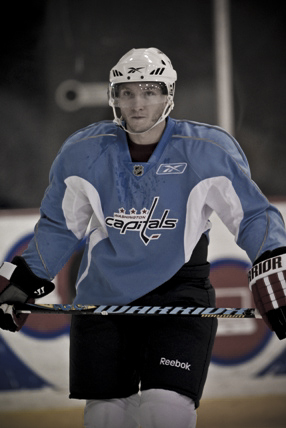 In the interest of full disclosure, we’re just going to come right out and say it – we’re big fans of Keith Aucoin.

There’s something intriguing about the Washington Capitals scrappy forward that makes it impossible not to root for him.

When he got called up two weeks ago, we refused to get our hopes up. The Caps were dealing with a handful of injuries and there was little reason to believe Aucoin would be in town after everyone got healthy again.

But a funny thing has happened recently – Aucoin has points in three-straight games and he keeps finding subtle ways to impact games, even when playing limited minutes.

We caught up with the 30-year-old minor-league standout yesterday to chat about his mindset, both on and off the ice, these days.

Alright Keith, you’ve got a little point-streak going on these last couple days and seem to really be making the most out of this opportunity. How comfortable are you feeling this time around?

“I’ve felt a lot more comfortable out there this year,” he said. “Coming to the team last year was kind of tough. It was the first time I’d done that in a long time. But knowing the locker room, the guys and the system and knowing that the coaching staff knows what to expect from me, I think all of that is making it easier for me to go out there and make plays. They’re giving me a lot of great chances – like playing on the powerplay – and they’re giving me a lot of ice time, so it’s been a lot of fun.”

How much of it is feeling comfortable off the ice first and then having that translate into success on the ice?

“It’s a lot,” Aucoin said. “It comes from playing a lot. When you’re playing well, you’re going to play with a lot of confidence. Once the second and third games came around, I started playing with a lot more confidence and I started playing a lot better. It just takes a little bit to get your legs back under you when you get called up. You get to a point where you’re playing with so much confidence that you’re going to go out there and produce every shift and help the team win.”

And you’re not the only one with confidence. Like you said, coach Bruce Boudreau has thrown you out there with the big guns on the powerplay lately. How great has that been?

(Laughs). “Yeah, it’s fun,” he said. “Every time I get to go out there with those guys – you know, some of the top guys in the league – you get a little nervous because you want to make sure you get them the puck and you don’t screw up. But it’s a lot of fun when I go out there, even if a lot of time I don’t know where to go. It’s kind of a split decision, where to go. But they help me out a lot and make it easier on me because they all know how to make plays. It’s a lot of fun and something I look forward to.”

Boudreau recently said something along the line of, “you’ve got everything except for the NHL body.” Obviously that’s been the knock on you and it’s something beyond your control …

“Exactly,” Aucoin said. “You just have to use the stuff you have to your advantage. With the new rules that have been put into place, they’ve really helped me a lot. I’m able to use my speed more because they can’t use their stick or hold you in the corner anymore. That’s been a big reason why I’ve been successful at this level. I try not to use my size as a disadvantage. I try to be physical and have never shied away from that stuff.

Off the ice, how tough is the uncertainty when you’re called up like this – knowing that some roster spots are going to have to open up once guys get healthy?

“It’s tough, but you kind of get used to it,” Aucoin said. “The last few years it’s something I’ve gone through. The best thing you can do is go out there every night and give it 110 percent and make it hard for them to send you down. That’s the best thing you can do, and I feel like I’m doing that. I try not to worry about it, because I think if you get caught up in it, then it affects your game and you don’t play as well. I just take it day-by-day and go from there.”

Okay, so if you’re living one day at a time, then how much fun are you having this time around?

“I’m having a great time,” he said. “It’s a great team and a great locker room. They make it a lot easier on me and this is a fun locker room to be a part of. They’ve got some of the best players in the world here, so it’s a lot of fun. I’m going to enjoy it as long as I’m here.”