theodore is the difference 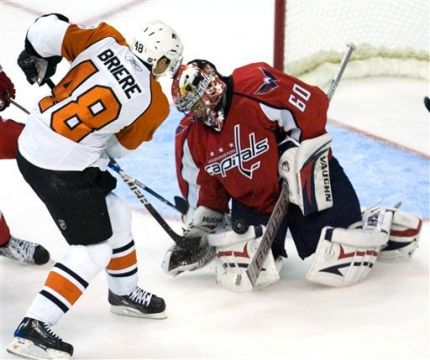 When Semyon Varlamov first arrived in Washington and showed flashes of brilliance, Capitals fans quickly envisioned a lock-down goalie who could single-handedly take over games.

One season later, that’s exactly what the Caps have. The only surprise? It’s Jose Theodore who has become the indisputable number-one goalie in Washington. Not Varlamov.

After falling behind 2-0 deep into the second period Tuesday night, the Capitals battled back to defeat the Philadelphia Flyers 4-2 at the Verizon Center, thanks to Theodore’s best outing since he joined the Caps.

“I felt pretty good,” Theodore said. “I’ve been feeling pretty much the same way since the first game. Sometimes you just have to do a bit more. It doesn’t mean that on a 20-save night I don’t feel as good. I think the guys played really well clearing the puck and I was able to challenge the shooters, which is a big part of my game. They did a great job of clearing away rebounds.”

The Capitals have won five-straight games after Theodore’s 41-save effort against the Flyers. And while Theo kept them in the game early, none of his saves were bigger than when he shut down Flyers forward Darroll Powe on a penalty shot in the third period.

“In training camp I said it was the best I felt since the lockout,” Theodore said. “Sooner or later, people are going to realize I didn’t say that just for fun.”

With Theodore frustrating the Philadelphia offense, the Capitals top line of Alex Ovechkin, Nicklas Backstrom and Alexander Semin handled the rest – combining for four goals and nine points on the evening.

The Capitals failed to convert on a lengthy five-on-three powerplay in which they had a two-man advantage for 1:41. Typically when that happens, it serves as a huge momentum boost for the opposition. In a related story, Flyers defenseman Braydon Coburn scored just one minute after the powerplay to give Philadelphia the two-goal lead.

But that’s when something clicked for the Caps offense, who responded with an Ovechkin goal, which was set up by a beautiful pass from Backstrom, just 99 seconds later.

“We got pissed off,” Backstrom said. “We were so angry that we couldn’t score.”

Pissed off or not, Backstrom evened the score at 2-2 with less than two minutes remaining in the second period with his third goal of the season. Not only was it huge because the goal tied the game, but it ended a streak in which the Caps had failed to score on 13-straight powerplays.

Semin gave the Caps the lead for good with a wicked wrist shot that froze Flyers goalie Ray Emery 5:24 into the final frame and Ovechkin added an empty netter to send the sellout crowd home happy. But the only reason the Caps had a chance Tuesday night was because of the superb play of Theodore.

“Absolutely,” said Capitals forward Keith Aucoin. “That’s one of the best games I’ve seen him play since I’ve been here. He’s been playing really good and he made some huge saves for us in every period tonight. It’s fun to watch him when he’s playing like that. He was definitely the key to the win tonight.”

Not to take anything away from fan-favorite Varlamov, but Theodore is definitely the undisputable number one goalie in town.

While his record is just 3-2-2, Theodore 2.47 goals against average and a .922 save percentage. And while Varlamov is prone to giving up goals in bunches, Theodore has only improved when the Caps fall behind an opponent this season.

No lead is safe against the Capitals these days. Not when they have one of the leagues most potent offenses and a rock-steady goalie anchoring their defense. Just ask the Flyers.