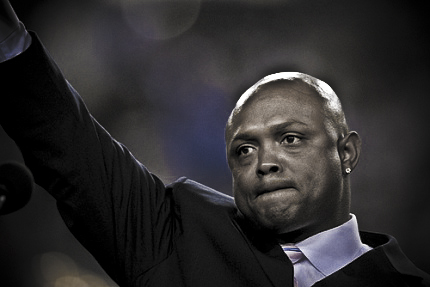 1. “When the Sun Goes Down” by Arctic Monkeys

Why must networks continue to give the Washington Redskins primetime games? We ask this because, even before this season turned into an absolute nightmare, it’s difficult to remember the last time the ‘Skins actually had a strong showing when all eyes turned to D.C. for a marquee matchup.

Having lost four out of their first six games, with losses to some of the worst teams to actually qualify for “professional” football status, there was little reason to believe the Redskins would somehow get their collective act together and avoid embarrassment against the Philadelphia Eagles on Monday Night Football.

Of course, the game seemed a fitting ending to a week in which the team became a punchline on a national level after management decided it was a good idea to take away head coach’s Jim Zorn’s playcalling duties and hand them over to a 67-year-old man who, until three weeks ago, was happily serving meals on wheels to old folks in Detroit (see? You can still kick the team without beating the “bingo” jokes into the ground).

While few rational people believed the Redskins would actually be victorious against the Eagles, it was still jarring to see the game basically over just two minutes into the game.

On Philly’s fourth offensive play of the night, Eagles quarterback Donovan McNabb handed the ball off to wide out DeSean Jackson on an end around that caught the Redskins so completely off guard, that fans witnessed what might have been the easiest 67-yard run in NFL history.

For his encore, Jackson then caught a 57-yard touchdown pass in the second quarter that gave the Eagles a 27-7 lead. Defensive back Carlos Rogers bit so hard on a double move by Jackson that by the time McNabb threw the ball, it honestly looked like the Redskins only had 10 men on the field – Jackson was that open.

So yeah, even on the night when Redskins receiver Devin Thomas and tight end Fred Davis both caught their first NFL touchdowns, Jackson completely upstaged them both. Here’s the kicker: all three players came from the second round of the 2008 draft. Thomas was the 34th pick, Davis was the 48th and Jackson went one spot later at 49 – meaning the ‘Skins passed up the chance to draft the game changer twice. We can’t help but wonder if that was part of his motivation as he ran circles around the burgundy and gold Monday night.

3. “This Place is a Prison” by The Postal Service

We can’t help but feel bad for Redskins quarterback Jason Campbell. Seriously, at this point, you almost wish that management’s offseason dreams would have come true and Campbell would have been traded away in favor of some other flavor of the month. Then, on nights like this, new guy would be pounded into the ground by aggressive defenses happily taking advantage of the worst offensive line in pro football.

Against the Eagles, Campbell was sacked six times. He fumbled twice, losing one, and had a pass intercepted and returned for a touchdown after it was batted down at the line of scrimmage. All while playing on an ankle he sprained on Washington’s third offensive play of the night.

It goes without saying that it’s difficult to run for your life when you’ve got a bum ankle. But the lowlight of this divisional matchup came when the Redskins couldn’t even execute the simplest of plays – snapping the ball.

In the closing moments of the final frame, center Casey Rabach managed to botch a snap on fourth-and-goal in one of the rare moments this season when the ‘Skins found themselves in the red zone.

Its one thing to blow a blocking assignment and let your guy get a free shot at your helpless quarterback from the blindside (cough … Stephon Heyer … cough), but it’s a whole other level of embarrassment to sabotage a rare scoring chance before the play evens starts.

4. “Reason to Mourn” by Ben Harper

The Redskins have had one consistent playmaker this season. His name is Chris Cooley. They will now, in all likelihood, be without their star tight end for the remainder of the season after Cooley was injured on the first play of the second quarter. Most fans missed it, mostly because everyone was too busy watching Campbell get stripped of the football.

After the game, Zorn confirmed the injury – which is a break is on the inner side of Cooley’s tibia. This means that the Redskins offense, which is already nonexistent, will now be without Cooley and tackle Chris Samuels for the rest of the season.

In a related note, if you were to ask which two players the Redskins offense could least afford to lose, the names Cooley and Samuels would be prominently involved.

There was one bright spot on this evening. Sadly, it happened before kickoff.

But, at this point, we’ll take what we can get. On an otherwise forgettable evening, the team did one thing right, inducting returner Brian Mitchell into the Redskins’ Ring of Fame. The always outspoken Mitchell has never hesitated to speak his mind – good, bad or ugly – about the Redskins, which is probably why it took the team this long to honor him. But he’s still the NFL’s all-time leader in kickoff and punt return yardage and gave 10 highly-productive seasons to Washington.

While younger ‘Skins fans can only watch helplessly as Antwaan Randle El alternates between fair catches and fumbling punts, old timers can think fondly back to the days when Mitchell could actually do something once he got his hands on the football. Which basically sums up where this franchise is at. On a dreadful evening when the rest of the country once again got to laugh at our expense, the only saving grace came from honoring a player who hadn’t stepped onto the field for the Redskins in a decade.