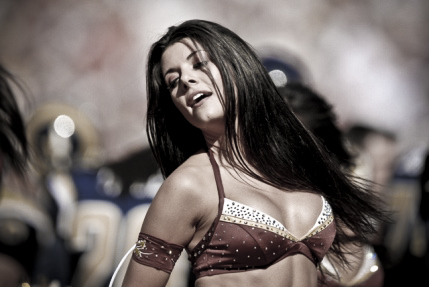 Sure, seemingly everything around the Washington Redskins is crumbling. The team has turned into a punchline after giving three previously winless teams their first victory of the season. Well, it’s either that or hiring a bingo caller to run your offense instead of your offensive coordinator-turned-head coach. Really, feel free to take your pick.

And now, the Redskins host the Philadelphia Eagles on Monday night – which means all eyes will be locked on the dysfunctional franchise we’ve all come to know and love (which isn’t a good thing – not with the ‘Skins struggling in primetime games even before this disappointing season). So yeah, there’s not a lot of cause for that cautious optimism we spoke of before the season.

But that’s okay. Because we’ve still got really hot cheerleaders, and that’s got to count for something. So instead of focusing on all of the overwhelming negativity surrounding the Redskins, please enjoy this photo. She looks happy. Maybe looking at the photo can help you get there too.

One final tangent. Morons keep forwarding us a list of pitiful jokes that go something like this:

Q. What do you call 47 millionaires sitting around a TV watching the Super Bowl?

A. The Washington Redskins.

Here’s our issue: if they have a 53-man roster (plus eight on the practice squad), why are only 47 Redskins getting together for this hypothetical Super Bowl? Seriously. This bothers us. Are the rest of the players jerks who blow off team functions? Is there dissension in the locker room? Did Mike Sellers screw up his assignment and end up at the wrong location?

If you’re going to tell shitty jokes, can you at least have the common courtesy to do basic research into the number of players on an NFL roster. Jesus, thanks for screwing up our moment of zen. You dick.