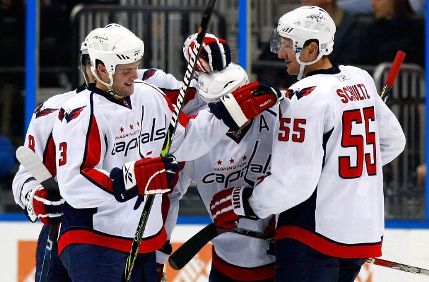 If the Washington Capitals are going to be a legitimate contender, then they’re going to need wins like Thursday night’s 5-4 victory over the Atlanta Thrashers at Philips Arena.

On a night when forward Alex Ovechkin was a nonfactor and forward Alexander Semin was out of the line-up due to an illness, the Caps found the secondary scoring that’s often lacking – thanks to goals from Eric Fehr, Alexandre Giroux, Jeff Schultz, Matt Bradley and Chris Clark.

Put it this way, the Capitals top five forwards – Ovechkin, Nicklas Backstrom, Brooks Laich, Mike Knuble and Brendan Morrison – went pointless. The Caps’ powerplay failed on all seven attempts and even gave up a shorthanded goal. Washington goalie Semyon Varlamov gave up two soft goals. And yet, the Capitals were able to beat a division rival on the road. That doesn’t happen very often.

“It was good because I didn’t think our number-one line was very productive, and our special teams – that was probably our power play’s worst night in the three years I’ve been here,” said coach Bruce Boudreau. “You need them sometimes, and tonight we got them.”

Leading the way for this improbable victory was Schultz – the lanky defender who frustrates many Caps fans with his inconsistent play.

Against Atlanta, Schultz was everywhere – throwing around his body, clearing opposing players away from the net and playing with a general confidence that’s been missing from his game. Fehr’s breakaway goal, just over two minutes into the game, was only possible because of a perfect cross-rink pass from Schultz.

With the score tied 1-1, the Caps took the lead again – this time courtesy of their top two Hershey Bears. Scrappy forward Keith Aucoin faked a slapshot from the left faceoff circle and then fired a beautiful pass to Giroux, who lifted a wrist shot over Thrashers goalie Ondrej Pavelec to regain the lead.

The game was tied 2-2 courtesy of Ilya Kovelchuk, the NHL’s second best Russian goal scorer, after the first period. But the Capitals took over the game for good with a flurry of second-period goals to chase Pavelec from the game and ensure they left Atlanta with two points.

Schultz picked up his first goal of the season on the flukiest of plays. Schultz took the puck from Varlamov and harmlessly flipped the puck out of the Caps’ defensive zone in the general direction of Knuble. The puck took a couple of bounces and somehow skipped over the shoulder of Pavelec to give Schultz a goal from roughly 150 feet away.

Bradley’s goal also came courtesy of Schultz, who blasted a shot from the point that Pavelec once again had trouble corralling. Bradley, who was camped out near the net, got to the rebound before the Thrashers goalie and lifted a shot into the open net for the 4-2 lead.

Just 14 seconds later, Clark took advantage of a fortuitous bounce off the boards behind the net to give the Caps three goals in just 88 seconds and a 5-2 lead.

The Thrashers got back into the game, thanks to a shorthanded goal by defenseman Zach Bogosian and Kovalchuk’s second goal of the net, but the Capitals were able to survive the late surge and preserve the win.

“It wasn’t a textbook game,” Boudreau said. “I think both teams were really sloppy. Both teams got some pretty soft goals. It wasn’t a very well-played hockey game.”

But the man of the night was Schultz, who had the first three-point night of his NHL career. A guy who had one goal all of last season – and it came on an empty netter – paved the way on a night when, more times than not, the Capitals would have lost this game. In fact, Washington was 1-9-1 in games when Ovechkin, Semin, Backstrom and defenseman Mike Green went scoreless last season.

The Caps don’t need this kind of offensive output from Schultz every night, but games like this will go a long way towards showing your head coach and your teammates that you can be trusted. And while the points are great, the best way for Schultz to quiet the critics is to go out and play solid hockey on both ends of the rink. This game, hopefully, was his first step in the right direction.