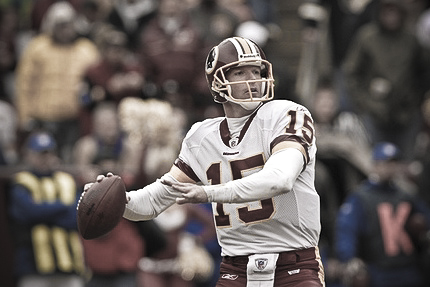 After losing to yet another doormat last week, falling to the previously winless Carolina Panthers 20-17, the Washington Redskins absolutely needed a strong showing against the Kansas City Chiefs Sunday.

That’s because, heading into the Chiefs game, the Redskins were just 2-3 after playing one of the easiest schedules in the history of the NFL.

Kansas City came into the game as the sixth-consecutive team the ‘Skins have faced this season without a win. And if you toss aside the New York Giants, who Washington played week one, the combined record of St. Louis, Detroit, Tampa Bay and Carolina was 2-17 – with both wins coming against the burgundy and gold.

So yeah, if there was ever such thing as a must-win game … well, this was it.

Of course, nothing is easy for the 2009 Washington Redskins.

That’s the only explanation for running back Clinton Portis fumbling away the ball on the opening drive – ensuring that yet another pitiful team felt they were in the game against the Redskins. And sadly, the rest of the first half was even worse, with Washington heading into the locker room down 3-0 at the break.

Redskins quarterback Jason Campbell completed nine out of 16 passes for 89 yards with no touchdowns, one interception and a QB rating of 46.1. Portis went into halftime with just 23 yards on 11 carries and the fumble. We’d mention someone in the passing game, but the Redskins don’t have one.

Seriously though, the ‘Skins offense had just four first downs in the first half and were behind in pretty much any category the NFL keeps stats in.

Campbell and the offense were so ineffective that the Chiefs nearly doubled their time of possession (19:51 to 10:09), which meant that even though the Redskins defense had performed well, they were on the field way too much in the first half.

At that point, no one could have faulted coach Jim Zorn if he threw a uniform on and trotted out onto the field to play quarterback himself to start the second half. Anything had to be better than what ‘Skins fans were subjected to in the first half.

Nevermind that he’s only ever been successful running an Al Saunders offense (*700-page playbook not included) he has roughly four decades of experience in. These fans were adamant that he could step in immediately and become a West Coast sensation overnight, quickly showing fans, coaches and Jason Campbell himself how a quarterback should play.

All of that sounds great … until Collins actually got in the game.

His first pass attempt was a thing of beauty – a 42-yard bomb to wide out Santana Moss. But the rest of Collins’ outing was remarkable for one reason – he actually played so poorly that fans chanted “We Want Campbell! We Want Campbell!”

For the day, Collins went six for 14 for 75 yards (with a QB rating of 60.1). Take away the Moss pass, and you’re looking at five completions on 13 attempts for 33 yards. And that’s before we mention that he was sacked twice, fumbled twice and brought down for a safety when the game was on the line because he’s too slow to actually avoid any sort of rush.

We doubt it, but maybe, just maybe, Collins dreadful day was enough to show those fans that Tom Brady couldn’t be successful in the Redskins offense, as presently constructed.

The offensive line is a joke. No one plays with any confidence. Points are so hard to come by that our good friends from Japers’ Rink pointed out that the Redskins and Alex Ovechkin both finished the week with six points (with Ovechkin winning the tiebreaker via his shootout goal Saturday night against Nashville).

As you all know by now, Portis and fullback Mike Sellers had a little dust up recently after Sellers found out that Portis asked the coaches to bench Big Mike in favor of Todd Yoder.

It seems, after seeing Sellers miss key blocks time and time again, Portis finally had enough and figured it was easier to change fullbacks instead of waiting for Sellers to learn how to pick up the right defender. So why do we bring this up?

Well, Portis has 73 touchdowns over the span of his eight-year career. And none of those 73 touchdowns were as long as the 78-yard run Portis broke off early in the third quarter against Kansas City. But did Portis get in the endzone on the longest run of his career? Nope. Not a chance. And why is that? You guessed it. Because Sellers had one guy to block and couldn’t do it, so Portis got tackled on the 10-yard line.

The Redskins had to settle for a fieldgoal that drive and any hope of someone other than kicker Shaun Suisham scoring points on the day was crushed.

Sobering fact: the Redskins have given up as many safeties as they’ve scored touchdowns over the last two weeks. So basically, if they’re in an endzone, it’s 50-50 as to which team gets to celebrate.

Say what you will about the conditioning of Redskins defensive tackle Albert Haynesworth, but the guy continues to impact games more than anyone else wearing burgundy and gold this year.

Against Kansas City, Fat Albert was everywhere – finishing the game with five tackles, four quarterback hits, one pass defended and a half of a sack. But the Haynesworth effect goes much further than just one guy – all he has to do is take the field and it free up his teammates to make plays around him because of the constant double and triple teams that Haynesworth requires.

That explains why defensive end Andre Carter has 5.5 sacks in six games, after finishing the 2008 season with just four sacks. It also explains how a rookie like linebacker/defensive end Brian Orakpo can have four sacks through six games when the guy he effectively replaced, All-Pro defensive end Jason Taylor, had just four all last season. Opposing offenses have to gameplan so much for Haynesworth that his teammates can’t help but to benefit.

The Redskins had five sacks against the Chiefs, and have 11 sacks over the last three weeks. All this from a team that recorded only 24 sacks all last year. So yeah, we’ve got no problem with Haynesworth coming off the field for a couple plays here and there. Because he still impacts the game more than anyone else on the roster – even when he’s only on the field for 65 percent of the snaps.

The Jim Zorn Era is officially coming to an end. That’s the only reasonable explanation for the news that Vinny Cerrato relieved Zorn of his playcalling duties.

It might be difficult to believe now, but when Cerrato and friends first hired Zorn before the 2008 season, it was to be the offensive coordinator. Management was convinced this guy was an innovator and, more importantly, that Zorn was the guy who could get Campbell to reach his potential.

Of course, legitimate NFL head coaches don’t like to walk into a situation where your boss has already handpicked your staff, so no one else wanted to take over the Redskins head coaching job, which is why Zorn received the promotion to coach just 15 days later.

After a 6-2 start, everything looked great. The Redskins offense looked solid and Campbell went a month at a time without throwing an interception. But then something happened. Maybe defenses caught up to Zorn’s west coast offense or the offense became too predictable.

Whatever the case, the ‘Skins have gone just 4-10 since then and now Zorn has been stripped of the sole reason he was brought to D.C. in the first place. We fully understand that things aren’t working on offense for the Redskins, but this isn’t the way to improve the situation. All this does is cut the legs out from under Zorn.

In a perfect world, he’d have said, “I’m not giving up playcalling. Either fire me or go away.” Unfortunately, he’s too classy for that. So he’ll be left to dangle in the wind until management sees fit to finally let him go. And when he’s gone, a new coach with a new quarterback will take over and eventually suffer the same fate, unless owner Daniel Snyder realizes the organization’s problems run a lot deeper than a coach or a quarterback.

Our only question is: how ironic is it that Cerrato was the one to tell Zorn he’s in over his head?