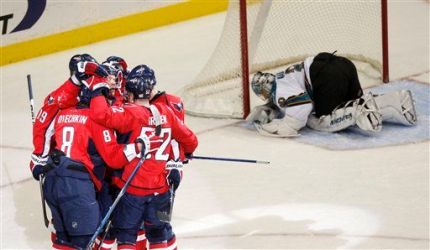 The Washington Capitals hadn’t beaten the San Jose Sharks in more than a decade, and were winless lifetime against goalie Evgeni Nabokov (8-0-0). And if that’s not bad enough, the Sharks were the one team in the NHL that superstar Alex Ovechkin had yet to score a goal against. Oh, and the Caps were winless in their last four games.

All of that would lead a reasonable fan to assume that the Capitals would struggle Thursday night when San Jose, who earned the President’s Cup a season ago for the most points in the league, came to the Verizon Center.

That, as they say, is why they play the game.

During the second period, Ovechkin scored twice in the span of 28 seconds to blow open a 1-1 game as the Capitals cruised to their most impressive win of the season. Forwards Alexander Semin and Matt Bradley also scored in the win.

“We played well today and were able to scratch out a win,” Ovechkin said to the media circus after the win. “We did a good job all around and found a way to win the game. We knew it was going to be a hard game but we had a good second period and I’m happy to get two points.”

While there was a lot to be happy about at the conclusion of this one, there is some cause for concern – Caps goalie Jose Theodore, who has been stellar in net this season, left the game after the first period due to injury.

Semyon Varlamov, who’s been left to ride the bench after some shaky play earlier this season, started the second period and looked solid in relief, finishing the game with 15 saves.

“You couldn’t have written a better script to have Varly having his struggles the two previous games and then to come in and shut down a team like this,” said coach Bruce Boudreau. “That must be good for his confidence.”

General Manager George McPhee told reporters after the game that Theodore left the game because of back spasms and, like most of us, he is day-to-day.

Should Theodore be out for any length of time, the Caps would go with Varlamov and would likely recall Michal Neuvirth, the Hershey Bears goalie who has been sidelined with a hip injury.

Instead of dwelling on a possible nerve-wracking goalie situation, we’ll instead focus on Ovechkin, who once again found a way to single-handedly take over a game.

“I thought we were a really determined group tonight and when Alex got those two goals, it seemed like a surge of confidence in our team,” Boudreau said.

It should be noted that both of Ovechkin’s goals came courtesy of new linemates, Mike Knuble and Brendan Morrison. The players like to joke about Boudreau’s “musical chairs” method of juggling lines, but as long as it continues to provide results, there’s little reason to change.

And while Ovechkin and Semin are expected to score, Bradley scored a goal on his former team that was definitely a cause for celebration. We were at Caps practice one day last week and overheard forward Brooks Laich giving Bradley some grief as the two friends left the ice.

“Nice to see you didn’t work on your shot in the offseason,” Laich said.

But they don’t come much prettier than Bradley’s goal against San Jose.

Defenseman Milan Jurcina blasted a shot from the point and when the rebound ended up on the stick of Bradley, the checking line forward went top shelf. It was a goal scorer’s goal from a guy who is usually described as anything but.

The Caps had it all Thursday night against one of the NHL’s elite teams. Balanced goal scoring, solid defense and timely saves from their goaltenders paved the way for an easier than expected win against the Sharks.

If the Capitals can build off of this momentum and continue to correct the minor issues that plagued them during their losing streak, there’s little reason to doubt they’ll be returning to the top of the Eastern Conference standings sooner rather than later.