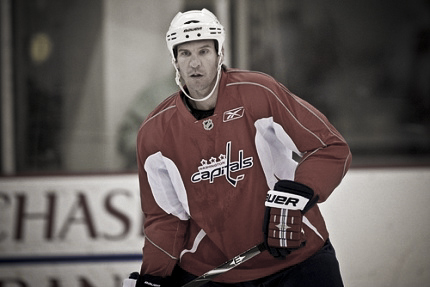 It became painfully obvious during last year’s playoff run that the Washington Capitals, while immensely talented, were lacking in one major area.

Sure, guys like Alex Ovechkin, Alexander Semin and Nicklas Backstrom can skate circles around the competition, but that can also be a problem. More than once, coach Bruce Boudreau was left standing at the podium after a tough loss trying to explain why his players were more concerned with out-skating the competition instead of out-hustling them.

Thankfully, the Capitals are the smartest franchise in town. When there’s a problem, they’re quick to identify it and to find a way to resolve it.

So when free agency began, the team moved quickly to sign forward Mike Knuble – a gritty 37-year-old who has no desire to end up on highlight reels. He’s the epitome of a blue-collar worker. He shows up for work, does whatever the boss man asks of him and never bitches or moans.

If you’re building a team around talented 20-somethings, it’s vital to have a guy like Knuble to point them in the right direction. With that in mind, we sat down with the newest member of the Washington Capitals to see how he’s adjusting to his newest challenge.

Everyone knows what it’s like to be the new kid in school. How tough was it to get used to a new locker room and feel like you fit in with these guys?

“Hockey players are hockey players,” Knuble said. “It’s been good. You known some of the guys beforehand and have friends who’ve played with guys, so everybody kind of knows a little bit about you before you get here.”

Obviously playing with the Philadelphia Flyers, you were familiar with most of the names here. Has anything been different from some of the thoughts you might have had coming into this new situation?

“No, everything’s been good,” he said. “It’s a good bunch and they like to have fun. You can tell they genuinely care for each other, and those are all good parts.”

Talking to some of the guys, they say you fit in so quickly, they don’t even consider you a new guy anymore …

“Obviously, if I knew that, I guess I’d be the coach, wouldn’t I,” he asked with a laugh. “I think in a couple games it was our penalty killing – or taking a penalty late and not being able to kill it. Giving the opponent a chance to cash in, which they did. Last game, our powerplay let us down a little bit, I think. Five on five, I think we’ve been pretty good. I think it’s been coming down to our special teams battles. If you were to crunch the numbers, I think it would reveal itself in the numbers.”

You’re a veteran player who does well planting yourself in front of the net and digging pucks out of the corners. Since you’ve been here, you’ve skated with a handful of different guys. Does it matter to you who you’re on a line with?

“I think I have success when I play with good players,” Knuble said. “Good players get the puck to the net and that’s when I can help out. You saw with our goal the other night, the puck bounces off your skate and goes to Mike Green, who puts it in the back of the net. Just stuff like that, is kind of what we need. That’s what I do. But I’m going to be a good teammate and play wherever Bruce wants me to.”

You’ve played on some impressive teams in your career. How does the talent level on this Caps team stack up against those squads?

“This is a great group,” he said. “They’ve all grown and come up together. They’ve got a few years together now with guys having been here for four or five years. When guys first came in they took a lot of losses and got beat up on. But they stuck with it as a group. They took their losses in order to grow, and now, it’s time for the next step.”