carter: we have to win games 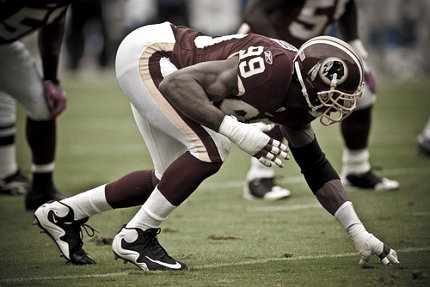 While 99 percent of the Washington Redskins should be doing some serious soul searching after this weekend’s 20-17 humbling loss to the Carolina Panthers, the effort of defensive end Andre Carter should not be questioned.

That because, unlike most of his teammates, Carter actually bothered to show up against the Panthers – finishing the day with six tackles, a forced fumble and two and a half sacks. Not bad for a guy who had just four sacks all of last season.

We caught up with the nine-year veteran after the game to talk about his big game, and more importantly, to search for answers to the questions that continue to plague the Redskins.

On an otherwise disappointing day, you were able to have some success getting to the quarterback. How were you able to cause so much havoc in the Panthers’ backfield all day long?

“For one thing, praise to God,” Carter said. “Without him, none of this would be possible. [Editor’s note: it’s true. We looked it up.] With a pass rush, you’re taught never to stop moving your feet. My old coach from college used to say that pass rushing is the second-most determined effort in football. It’s a battle of wills, that’s how I look at it. And I never stopped moving my feet.

“To be honest with you, I don’t know what I did to get those sacks,” he continued. “I just kept coming. And really, I wouldn’t have had so much success if I didn’t have 10 other guys out there with me doing what they were supposed to do.”

This game was different than what we’ve seen in the first four games, where you and Brian Orakpo have routinely been close, but for whatever reason, the quarterback has been able to get away or get rid of the ball …

“We were in synch,” Carter said. “We looked at the film from the past three games that Carolina had played and we knew the opportunities that were at hand. We tried to exploit them the best way we could.”

Both of the Redskins touchdowns came because of defensive turnovers resulting in a short field. With everything going on with the ‘Skins offense and the injury to Chris Samuels, did you guys feel like you had to do the heavy lifting  to give this team a chance to win?

“As a defense you have to always expect the unexpected,” he said. “I always look at it like we’re going to have to do heavy lifting, regardless of whether our offense did score points or didn’t. Playing defense is probably the toughest part of this game because it’s a battle of wills and who wants it more. So when we were successful and able to make those plays, it was great. But in the end, this was on us because we have to be more disciplined. We have to learn our lessons.”

Tell us you’re tired of playing in games week after week that come down to the very last play. Wouldn’t it be nice for you guys to come out just once and blow someone out of the water?

“Of course it would,” Carter said. “Every team dreams of that. That’s no secret. But I think for us, you can say it so many times – who wants it more, who needs it more, who desires it more – we all desire it. It just comes down to execution.”

You’re one of the veterans in this locker room. Tell us what these guys are thinking and feeling right about now …

“Overall, there’s always a level of disappointment when you lose,” he said. “I think the most important thing is that we stick together. I’ve been on teams where we haven’t been successful and everybody just kind of drifts apart. Fortunately for us, we are a veteran team and we’re closer than we’ve ever been before. However, that being said, we still have to win games. That’s what it boils down to.”

When you hear reports of guys like Clinton Portis and Mike Sellers getting into it, you start to wonder about people pointing fingers and all of that …

“I wasn’t there, so I couldn’t tell you about that scene, but from the outside looking in, I’m sure it’s just a small argument,” he said. “At the end of the day, you’ve got to play together. We’ve got to go out for one goal and accomplish that goal. You’ve got to push that drama aside, if there was drama.”

What does this team need to do to turn this season around?

“Four quarters of Redskin football,” Carter said. “Not just a half here or a half there. We’ve got to give four quarters, utilize the momentum when it’s in our favor and never back down.”