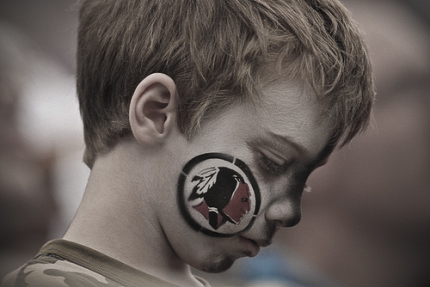 The city of Charlotte is beautiful. The locals are ridiculously friendly. And because the Carolina Panthers are still a relatively new franchise, there are still an obscene amount of diehard Washington Redskins fans in the area.

So much so, that a handful of the local media members were convinced Sunday’s game would be a home game for the ‘Skins, with burgundy and gold supporters outnumbering disgruntled Panther fans still waiting for the team’s first win of the season.

Here’s the kicker – regardless of which team you cheer for, it’s virtually impossible not to notice how similar these two teams are. Both have supremely talented individuals who, for one reason or another, don’t necessarily translate to team wins. Both teams are at their best when the running game is doing the heavy lifting and the quarterback doesn’t get in the way. Both defenses want to play aggressive and make the opposing signal callers uncomfortable.

And through the first month of the season, there are even more similarities. Neither team has been able to put together a full 60-minute performance. At times, both teams look careless with the football on offense, resulting in too many fumbles and interceptions. Neither team has much of a margin of error. The biggest difference between the Redskins and Panthers? Washington came in 2-2, while the Panthers were 0-3.

When running back Clinton Portis caught a touchdown pass from quarterback Jason Campbell it wasn’t a product of the Redskins offense doing anything special, rather it came courtesy of a Panther turnover on their opening drive. If that sounds familiar, it’s because the gift-wrapped touchdown was exactly what the Redskins did for Tampa Bay one week earlier.

If there was any justice in this world, this game featuring two mediocre teams still searching for an identity, would have ended in a tie.

Roughly three minutes into the game, the Redskins were dealt a stomach punch that would quickly alter the rest of the afternoon. Offensive tackle Chris Samuels collided with a defender head on and suffered a “stinger,” which is essentially numbness in his neck and shoulder. Team doctors felt it was best for Samuels to take the rest of the day off, which meant a guy you’ve never heard of – namely reserved offensive lineman D’Anthony Batiste – was thrust into action.

It should also be mentioned that before the game, the coaching staff decided to bench right guard Chad Rinehart in favor of “Big” Mike Williams, who was making his first start since 2005. So basically, 40 percent of the offensive line was comprised of people who never play. Kind of limits what you can do as an offense, right?

Campbell wasn’t exaggerating. The ‘Skins offense was nonexistent without Samuels, a six-time Pro Bowler, in the lineup. Washington had a total of 10 possessions on the day – two touchdowns, one fieldgoal, five punts, one turnover on downs and one safety allowed. Their two touchdown drives came only because the Redskins defense created turnovers and put them so close to the endzone that they HAD to score. Combined, the two drives were three plays for 14 yards.

There was no rushing game. Campbell was sacked five times, compared to just eight sacks through the first four weeks. If you’re looking for a reason why the offense failed to show up on a day the team somehow managed to score 17 points, look no further. If you’re looking for answers as to why the team ignored upgrading the team’s biggest weakness, the aging and fragile offensive line, well … we hear the general manager has a radio show.

It goes without saying that the Redskins had to change up their gameplan without Samuels in the lineup. We understand that means sacrificing some receiving options to provide extra support for your pass blockers. But it’s simply inexcusable that tight end Chris Cooley didn’t have a single catch on the day.

In fact, Cooley didn’t have a single pass even thrown his way against Carolina. The only time he touched the ball was when he recovered a fumble by wide out Santana Moss in the second quarter. This from a guy who has been the one constant on the Redskins offense in 2009.

He came into the game with 22 catches for 254 yards and two touchdowns on the year and at least one reception in 75 consecutive games. Sadly, after this weekend, he’ll have to start that streak over again.

It shall forever be known as “The Tough Muff.”

With the Redskins clinging to a 17-12 lead with roughly 10 minutes left in the fourth quarter, the game took a controversial turn when wide out Antwaan Randle El was back to field a punt. Cornerback Byron Westbrook was attempting to block his man while Randle El waved for a fair catch. Unfortunately for the ‘Skins, the punt was short and Randle El had no chance to actually make the fair catch.

Instead, what you saw was Westbrook, who was locked up with a Panther gunner, driven back into Randle El and during the chaos the ball bounced off of Westbrook’s foot. Carolina recovered the ball and scored moments later. Game. Set. Match.

When the team was up 17-2 in the second half, it didn’t look like it would happen, but fear not, in the end, the Redskins found the banana peel. And for the third time this season, a previously winless team leaves with victory number one courtesy of the burgundy and gold.

Even fans in denial about the current state of the Redskins know that coach Jim Zorn is on the hot seat right about now. Heading into the Carolina game at 2-2, it wasn’t beyond the realm of possibility to believe Zorn and friends would need to win at least two out of three games before the bye week to stave off his impatient owner and remain employed.

Another loss to another bottom dweller isn’t going to help anyone’s cause – especially when pretty much every mainstream outlet that covers sports has used the words “Mike Shanahan” and “Washington Redskins” in the same sentence over the last week.

If that’s the case, the ‘Skins would need to defeat the winless Kansas City Chiefs and divisional rival Philadelphia Eagles to save their head coach.