caps have work to do 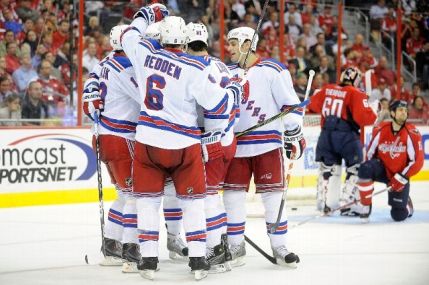 For all of the talented individual players on the Washington Capitals, they’ve still got plenty of work to be done if the Caps are going to be considered legitimate contenders this season.

That’s been readily apparent in the last two games – losses to the Philadelphia Flyers and the New York Rangers.

Yes, the team can score goals with the best of them, as evident by their league-leading 18 goals through just four games. But they’ve given up 15 goals over the same span – which is tied for tops in the league.

Forwards Nicklas Backstrom (10 points), Alexander Semin (nine points) and Alex Ovechkin (nine points) are the league leaders in scoring, but there are still too many times when each player tries to do too much.

Sometimes they get away with the “cutesy” play, whether it be attempting to skate through multiple defenders or attempting a highlight-worthy pass instead of a high-percentage, by-the-books pass. But just as often, it results in a turnover and an odd-man rush in the other direction. We understand that the Capitals are going to live and die with this high-risk, high-reward mentality, but that doesn’t mean it’s okay for players to sacrifice team play.

And while we’re on the subject of scoring, it should be pointed out that aside from the Ovechkin-Backstrom-Semin line, the only other goal scorers for the Caps this season comprise the second line – forwards Brooks Laich, Brendan Morrison and Mike Knuble.

For those keeping score at home, that means the team’s top six forwards have 18 goals. The other two offensive lines and the entire defensive rotation has zero. That will have to change, because it’s impossible to expect the top lines to continue to rack up points at such a ridiculous pace.

One player the team would love to see get going is offensive defenseman Mike Green. Against the Rangers, Green registered just two shots on goal. Unfortunately for Green and the Caps, he also had seven shots that were blocked and six others that missed the net entirely.

There’s an old saying about missing a hundred percent of the shots you don’t take, but misfiring on 13 out of 15 shot attempts ain’t much better.

Sadly, as a team, the Caps pretty much followed Green’s lead when it came to taking ill-advised shots against goalie Henrik Lundquist and the Rangers. Washington finished the game with 28 shots on goal, but had 22 shots blocked and missed the net 18 times.

Conversely, New York registered 29 shots on goal with just eight shots that were blocked and 11 that missed the net. And to take it one step further, the Rangers had 13 different players block at least one shot. The Capitals had just five players get in the way of the puck.

The numbers don’t lie. The Rangers were making smarter decisions on offense and their players were hustling and willing to sacrifice the body on defense in order to shut down the high-powered Capitals.

It doesn’t matter who you have in net, you’re not winning too many games when the numbers are this lopsided.

Now, that being said, Jose Theodore would love to have a do-over on both third-period goals he allowed. Just 18 seconds after Backstrom scored his second goal of the night, giving the Caps a 3-2 lead, Theodore ensured that any and all momentum in the team’s favor quickly vanished by allowing a “softie” to Rangers forward Marian Gaborik.

And then, it happened again less than three minutes later, with Gaborik scoring the eventual game-winner during a New York powerplay.

Speaking of the powerplay, it has not been kind to Washington during these last two games. Against the Flyers, the Capitals were called for nine penalties and allowed three powerplay goals. Last night, the Caps were given nine powerplay opportunities and scored just once on the Rangers. Not good times.

This team has the potential to be memorable. But it’s been said more than once, potential just means “ain’t done shit yet.” Players need to make smarter decisions, whether it’s avoiding taking bone-headed penalties or unnecessarily risky passes through traffic.

These players also need to understand that no team can win on offense alone. You want to watch a team that gladly abandons defense while attempting to run-and-gun past their opponent? Watch the Wizards win less than 20 games a year.

But that’s how the Capitals have looked in their own zone over the last two games. They don’t seem to care if the opponent scores, because they believe they can bounce right back and put points on the board on the other end.

This team doesn’t need to become a reincarnation of the 90’s New Jersey Devils, trapping opponents to death, but they could at least pretend to acknowledge that defense matters. Otherwise, this is going to be a long, long season.